Why Do Bible Bangers Hate the Jesus Seminar? 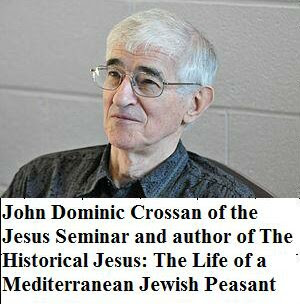 One can, of course, consider hundreds of reasons and maybe most would make some kind of hyperbolic sense to a normal person. But to dedicated bible bangers and authority obsessives, the reason is simple: The Jesus Seminar introduces objectivity, scientific methodology and logic into an otherwise patchwork amalgam of subjective dictates and a priori assumptions.

It also never occurs to these narrow minded zealots that if they were actually correct in their insipid beliefs (like the King James Bible being 100% authentic and true) then elite university courses (such as offered at Yale University) would not be based on Jesus Seminar findings. But since the thrust of those elite university courses is from the Seminar that leaves the fundies out in the cold. It's a shame that some holier-than-thou types are so much in denial over the nature of their Master (Yeshua) that they resort to reconstructing his very teachings to reflect their own self-righteous propensities.

For example, Prof. Dale B. Martin in his Yale University course, entitled: Introduction to New Testament History and Literature, aptly observes in his lecture No. 13:

That the Gospel of John is the only one that contains exhaustive details on the actual trial of Yeshua before Pilate. The other three just offer a few words. This implies the Gospel of John has been elaborated and expanded, perhaps by later copyists – who wanted to embellish it to give it the patina of historical moment. After all, what can one make of just a few words, say in Luke or Mark? (Btw, I invite serious readers to watch the whole lecture, and maybe the others from his course here:

Also, don't be dissuaded by the biblical bellyachers refrain that it's "Satanic"! They say this to everything that doesn't fit neatly into their absurd cubbyholes.

Prof. Martin also makes many other salient points including that the arc of events occurs in far too disjointed a manner for John to be a historical document. But this ought not be surprising, since the handlers and keepers of the earliest documents – including the Nag Hammadi scrolls, have already admitted that (Rev. Thomas Bokenkotter, in ‘A Concise History of the Catholic Church’, notes (page 17):

“The Gospels were not meant to be a historical or biographical account of Jesus. They were written to convert unbelievers to faith in Jesus as the Messiah, or God.”

In other words, the gospels were written as propaganda documents. And why not? The early Christians in the fight for their very lives, needed all the support they could get! If lying in their texts and scrolls might help, why not use it? This often meant the difference between being tossed to the lions in the Coliseum and remaining free to preach or spread the word (Kerygma).

But it is disingenuous not to face the truth of the duplicitous origin of many biblical parts, passages and even whole books. For example, as we learned at Loyola, Church Father Origen was perhaps the first Christian Father to complain about the meddling of copyists as he wrote (First Principles):

“The differences among the manuscripts have become great, either through the negligence of some copyists or through the perverse audacity of others; they either neglect to check over what they have transcribed or, in the process of checking, make additions or deletions as they please”.

As Bible scholar Bart Ehrman also notes (Misquoting Jesus, p. 54) there were almost no controls for standardization of textual content like there are today because there were no copyright laws! Thus, copyists could literally add or subtract as they saw fit. One estimate has it that nearly all the references in the NT to “Satan” or “Hell” were accomplished at the hands of copyists, leading one Bishop of Corinth to remark that:

“The devils’ apostles have filled it with tares, taking away some things and adding others. For them the woe is reserved”.

Now, what about biblical exegesis or textual analysis? In this case the actual structure of the idiom used in each translation is studied(as the Seminar did over six years), going back to Aramaic for example, then to Greek and Latin and English. We use something called hermeneutics which asks what the writer (in that vernacular) actually meant in the idiom of his day (NOT our day!) and what losses in meaning that idiom encountered as it was transcribed to other languages in succession.

Thus the primary objective of exegesis is interpreting what the passage in the original language meant in terms of its OWN CONTEXT not simply putting it into the new one. THIS is why so many biblical literalists foul up and end up in a ditch.

As I noted in an earlier blog, the process for the literalist is basically 1:1 onto:

Thus, [text x] undergoes no modification from what their eyes detect or parse in the passage.

In fact, there are three primary phases of the hermeneutics process so that at least three stages have to be covered, so:

Even this is oversimplified, since technically each step also need to be checked and parsed from one language to the other. For example, what did the author MEAN? (Go from Aramaic, to Greek, to Latin, to English). Then step [2] – repeating the same. When we did exegesis at Loyola we used columns for the four main languages and parsed each passage for EACH step before arriving at the final meaning. THESE are the difficult issues the Seminar addressed which the fundagelicals gloss over. So no wonder their outlook is so simplistic! It's so simplistic it's 100% WRONG!

What we acknowledge in doing this procedure is the fact that we have NO ORIGINALS of any scriptures, only error-ridden copies. But, if we can take the passages through the above sequence, then let the light of the historical research shine upon the effort, we can at least approach the truth. We are not so naïve as to claim or expect we HAVE the truth, since hermeneutics itself – its very use- is a tacit admission one can’t take passages literally.

The many logia in the Gospels would, if they could convincingly be shown derived from a single personality or source, be strong evidence that a historical Jesus existed. But such is not the case. In tandem textual analysis and historical research (see the Yale lecture)discloses we are left with an artifact created or invented by eager followers.

Two books for readers who are seriously interested in textual analysis:

1) The Authentic Gospel of Jesus- BY Geza Vermes.


2) The Historical Jesus: The Life of a Mediterranean Jewish Peasant - by John Dominic Crossan (member of the Jesus Seminar)

In Crossan's final conclusion - with which I wholeheartedly concur from everything I've seen- Jesus was a "peasant Jewish Cynic". (As Crossan points out, p. 421), a 'Cynic' embodied "a life-style and mindset in opposition to the cultural heart of Mediterranean civilization, a way of looking and dressing, of eating and living and relating, that announced its contempt for honor and shame, for patronage and clientage. ....Hippies in a world of Augustan yuppies." Little wonder then that Jesus' habits would infuriate not only Jewish orthodoxy but the Roman government. Leading ultimately to execution for what they'd have perceived as "subversion" of the Empire.

THIS was why he was killed, not because he said he said he was the "Son of God" (words never authentically claimed, but put into his mouth by others)

Reading a bible is fine as far as it goes. But if one doesn't know the technique or discriminating between what can legitimately be called authentic and what isn't - it isn't worth very much! One could as well read 'Harry Potter and the Sorcerer's Stone'!
Posted by Copernicus at 6:03 PM