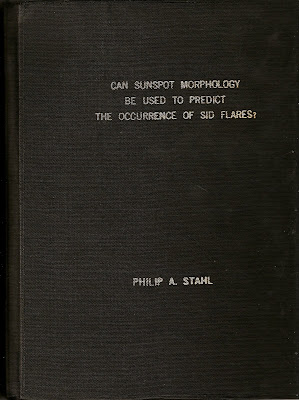 After being subjected to all the hype and hoopla regarding Bible-thumper and "Young Earth" advocate Jason Lisle, who supposedly is a "genuine astrophysicist" (as opposed to moi, who is (according to certain pastors) a "pretender"), I decided to bite the bullet and dig a bit deeper. That required me actually ordering his full Ph.D. Thesis and going through it to ascertain exactly what this guy has accomplished and putting this against the claims made for him by his over-eager groupies. Sure it cost some bucks to get his thesis (it's not simply available on the net in entirety) but I felt the investment was worth it in the end. How else to distinguish the blarney and bunkum from reality? In the 60s we had a saying about getting to the "nitty gritty" and to me, this entailed it!

So in this and several future blog posts (not necessarily consecutive or sequential)I will examine some key aspects of his work, starting with how it compares to my own Thesis, Can Sunspot Morphology Be Used To Predict the Occurrence of SID Flares? (originally submitted for the Ph.D. - but delayed by one examiner to enable further observational work via the Solar Optical Telescope (SOT, not the Hinode one!), which 1 1/2 years later was cancelled from the NASA budget, leaving the Ph.D. still born. An M.Phil. degree was awarded instead). Later examination, mainly via the papers actually published, will critically examine the methods he employed to substantiate his findings, in particular that the solar super-granulation possesses a particular north-south alignment.

I maintain this to be a worthwhile pursuit, not simply a scientific "witch hunt" conducted on Lisle's background and qualifications, because of:

a) the fact we both did research in solar physics areas, his involving solar supergranules (which in many ways are the 'nurseries' for solar active regions or ARs) and me into solar flares, the ultimate product of solar AR development.

b) The fact so much is made of his Ph.D. and contributions, especially by those over-eager to push a biblical world view on so many.

First things first, in terms of size, Lisle's Ph.D. thesis comes in at 210 pages, while mine was 401 pages, which included 68 pages of Appendices. These included Cartes Synoptique (the actual Carrington Rotation Synoptic maps which embodied the full identification of the data used in my investigation), a background into the nature of SIDs (sudden ionospheric disturbances) and how detected, the detailed computer program (line by line) that I wrote in BASIC to calculate the energy storage (i.e. magnetic free energy) of an AR based on observational data such as shear angle, profiles of all the SID flare occurrences by AR and by date occurring in the AR - so the examiner can see at a glance which ARs are most flare-active and whether the events follow a specific distribution, and last a mathematical derivation of the magnetic energy integral.

Lisle's Appendices by contrast covered 11 pages most of which were devoted to his instrumental layouts, technical processing and procedural idiosyncrasies, detection capabilities, pecularities of the user interfaces(s) and pre-processing of data.

His Bibliography covered some 8.1 pages (page 191 to the very top of 199) and included 148 references, while mine covered a full 9 pages with 130 references.(35 references which were data books from Solar Geophysical Data weren't listed on the advice from the thesis advisor).

In terms of published scientific papers produced from the Thesis, so far as I have been able to infer or trace (including listed in Lisle's Thesis Bibliography), Lisle had 4 published in peer-reviewed professional journals, while I had five. More interestingly, none of Lisle's papers was a "stand alone" publication (i.e. done without any co-authors) while two of mine were. The links for those 2 papers are given below:


The stand-alone authorship is especially important because it discloses the person is able to write a full paper on his own, and have it published professionally. As I said, examining Lisle's paper 'track' this appears to be a threshold he never crossed, for whatever reason. Hence, one is rightly concerned regarding how much of the co-authored papers he actually contributed to. His acknowledgements in the Thesis, for example, award extensive credit to Mark Rast for Lisle's Thesis chapters 4 and 5, to the extent that minus that assistance, he'd not have been able to write them! (There were NO similar parts or chapters of my own Thesis that I'd not have been able to totally write without ANY help!) Of course, Lisle's Chapter 5 is precisely the one to do with the N-S orientation of the super-granules! (The great "polarity" discovery the bible bangers constantly make so much ado about).

By contrast, even the papers that were co-authored with me, were papers I actually wrote start to finish, including all revisions. The only elements not prepared by me (in the co-authored papers) were the assorted diagrams, which were done by my thesis advisor (Dr. A. Achong) since he had the special technical implements to do the quality figures required. (This was for Solar Physics. The JRAS - for my 2nd paper listed above - didn't have these technical drawbacks and could convert ordinary black ink line drawings-figures to page compatible ones, hence I drew all those myself).

Lastly, a bit of a major surprise, which is certain to be a head-scratcher for Lisle's Bible-obsessed, Young Earth- Young Sun followers. On page 1 of his 'Introduction', Lisle actually acknowledges that the energy in the Sun is produced by thermonuclear fusion in its core. If he concedes this then he must admit to the processes of nuclear energy generation I outlined in my earlier blog, e.g.


And the time scales for the chains of the proton-proton cycle noted therein. None of which conform to a 6,000 year old age for the Sun.(Indeed, the only type of fuel burning for the Sun that would lend itself to an age of 6.000 years is if it were comprised of wood! Nuclear fusion automatically negates a young Sun!)

Questions abound regarding this flip-flop:

1) Was Lisle a biblical literalist back when he wrote that, but merely inserted it to please his advisor (Juri Toomre)?

2) Did Lisle actually accept that genuine scientific fact (on nuclear fusion in the Sun) at the time, and only alter it once he received his Ph.D. and joined AiG?

Inquiring minds want to know. The answers will resolve whether in fact Jason Lisle was indeed a "genuine astrophysicist", at least for a brief time, or has always been a pretender!
Posted by Copernicus at 9:15 AM