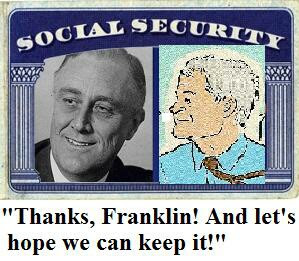 The article ('AARP Open to Social Security Cuts') in yesterday's Denver Post (p. 4a) had such an intensity and dread factor for older citizens that it's difficult to quantify it. On a physical level, however, it was like being kicked in the gut. There, on the page in black and white was the news that an organization that had previously defended Social Security was now prepared to allow for some cuts to benefits.

"Our goal is to limit any changes to benefits, but we want to see the system made solvent"

Immediately as I finished reading it, I told my wife: "They're going to catch bloody hell and then some for this!"

The piece then went on to cite Rother as intimating that the group's stance on possible cuts (first reported in The Wall Street Journal on Friday), should be seen as "less as a major change in position than as a reflection of the political and financial realities facing the social security system and the country as a whole."

Huh? What political and financial realities? You mean the deficit? But S.S. isn't responsible for that! As a matter of fact and perspective, presidents and politicos since Reagan have been raiding Social Security to pay for defense spending and thereby make deficits appear lower on the gamed accounting sheets! As for the real culprits in the parlous financial situation, look to: a) starting two occupations costing $3.3 trillion while demanding no increased revenues and b) allowing for ten years worth of Bush tax cuts (costing more than $4 trillion, including interest) at the same time, and with the latest extension in December last year factored in! And most of these deficits (88%) were rung up on the Republicans' watch!

The piece then quoted Rother again:

"You have to look at the tradeoffs, and what we're trying to do is engage the American public in that debate."

He went on to state that "reductions in benefits should be 'minimal'. They should not affect current recipients and instead be far off in the future".

Again, I had to cry 'Bollocks!' on reading this. Just who does the guy think is supporting current retirees via their FICA deductions? Does he believe that future generations will be willing to continue to sacrifice a chunk of their income knowing their own benefits will be reduced? Give me a freakin' break!

Of course, the published AARP stance opened the door to all the financial miscreants, including conservative think tanks and Republicans who've been pushing non-stop for cuts or privatization for decades. You also had the make-believe Dems - or as I call them DINOS ('Democrats in name only'), known as the Third Way chirping in that the AARP position represented a "watershed moment". But as I told wifey, more like a WATERLOO moment if they stick with it and don't correct. And I forecast a barrage of complaints to force a back down and backtrack.

there appeared an "immediate release" and clarification ('AARP Has Not Changed Its Position on Social Security') to the effect that the media (including the WSJ and NY Times, I presume) gave a "misleading characterization".

According to the AARP CEO A. Barry Rand:

"“Let me be clear – AARP is as committed as we’ve ever been to fighting to protect Social Security for today’s seniors and strengthening it for future generations. Contrary to the misleading characterization in a recent media story, AARP has not changed its position on Social Security.

“First, we are currently fighting some proposals in Washington to cut Social Security to reduce a deficit it did not cause. Social Security should not be used as a piggy bank to solve the nation’s deficit. Any changes to this lifeline program should happen in a separate, broader discussion and make retirement more secure for future generations, not less.

My personal take? Rand had to rush in, after the AARP was likely deluged by emails(most I believe rather unprintable) and rescue policy wonk Rother's ass. I also believe that after Rother's frank over-the-phone opinionating, there likely occurred some very high temperature chewing out by Rand. "How could you say that, you %$#@*&!"

But we know from experience people often let down their guards, especially via phone interviews. Happens a lot.

What it really shows me is that AARP has two divergent positions and one is mainly for PR, pushing the statement that Rand made on the AARP website, while the other is what we call sub rosa or under the table, and held mainly by the policy wonks and their insurance-linked front men. They are capitalists (pushing insurance) first and foremost, and likely share the view of Alan B. Simpson, Ben Bernanke, Alan Greenspan and others, that Social Security benefits need to be cut.

I'd always suspected AARP was never really a genuine frontline defender of Social Security, mainly because of the conflict of interest with their insurance sales. That's why I've always been a staunch contributor instead to The National Committee to Preserve Social Security and Medicare - because they have no sales angles they need to protect.

The real story of this snafu is that AARP is divided on the issue of Social Security benefits cuts. It will be interesting to see now what happens to Rother (whether he's retained as policy maven) and what new PR emerges in the internecine battles likely taking place in the organization.
Posted by Copernicus at 9:48 AM