How the GOP Could Destroy the Economy by Massive Spending Cuts 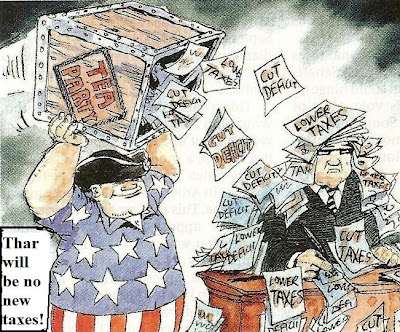 As President Obama begins more negotiations with the GOP's stalwarts on the handling of the debt ceiling increase, he needs to bear in mind (and take to heart) Sen. Bernie Sanders recent exhortations to "stand tall" and refuse to make any quick and easy deals to avoid confrontation. Sanders then referred to the tax reform dealings back last fall, and how Obama got gamed by the repukes. He can't let that happen this time around, as his re-election may well hinge on him showing the determined leadership a President is supposed to have. Obama's no longer a lowly state senator, and he needs to act the part. Also, he can't be afraid to piss people off, even the Repuglicans!

The Rethuglicans' bad faith is the problem at heart. If they have all signed "pledges" not to raise taxes,,ever, then Obama's hands are putatively bound in the making of ANY deficit reduction deal! He simply cannot be seen to give in to one-sided demands, nor to lopsided demands! The burdens must be shared between higher revenue (taxes) and spending cuts, not all on the latter, or even four-fifths. (Some ideas circulating have increased taxes at $400b, but spending cuts more than $1.6 b. This is nonsense and insane! It must be at least HALF and HALF! Also why I refuse to give any more $$ to the DSCC or any other Dem organizations until I see some evidence of spine. So far I don't!)

Anyway, an essay to read carefully is the recent one entitled Our Greek Tragedy, appearing in TIME (July 4, p.. 26) by Rana Forhoohar. She writes in one segment that I advise all Repug followers to read:

"There's still a belief that the government can cut spending wholesale and expect consumers to pick up the slack. This is magical thinking!"

Indeed, it is! The reason is that the Republicans in their grossly stubborn behavior, don't appreciate or understand the economic concept of aggregate demand. It is the index of aggregate demand that ultimately determines investment potential, and also unemployment and whether an economy is "paralyzed" - as ours seems to be (as disclosed by the constant references of pundits).

Aggregate demand is composed of two parts: 1) demand generated by consumers for goods and services, and 2) the demand for investment goods. When the level of aggregate demand is high, both these components are generally equally high, and the levels of production and employment are high. On the other hand, when aggregate demand is low - or even one of the components (e.g. (1)) is VERY low, then levels of production and employment plummet. Right now we are seeing a tabulated rate of 9% unemployment and more like 16% real unemployment which is signaling that the aggregate demand is low. In addition, we see almost no movement of corporate dollars (now nearing two trillion) to invest in labor or labor infrastructure - to enable more workers to be hired. Thus, also low demand for labor investment goods.

The two are clearly feeding on each other.

Now, the next thing, why is consumer demand still low, falling almost quarterly? It is because the wages that support it are low! The average workers' wages have remained static or gone down since the recession theoretically ended. Thus, consumers are buying less, and resorting to unusual savings devices (like extreme coupon clipping) when they do buy! Also, when people eat out now they're more likely to get meal coupons off Groupon.com then go to the cheapest place that takes them, and after eating ding the business by leaving zero tip.

In other words, the demand side of the landscape looks so poorly for consumers they are hunkering down...likely expecting another shoe to drop. That "shoe" - when they pay attention to the news, sounds like a severe cut in possible social services, thanks to the Republicans' rhetoric. If they foresee such cuts, say even for Medicaid for sick granny or Uncle Tim, then they will pull back on spending in case they will need the money to help care for them! Ditto with seniors on Medicare, if they suspect cuts are in the works (as Sen. Max Baucus has intimated). Thus, they also pull back on their spending, or even going out to eat, say at Bob Evans.

The total effect is to put more jobs (at those places, services) under pressure, and possibly engender more job loss. Thus, the mere mention of the GOP mammoth (~ $2 trillion)spending cuts puts consumers under such potential threat that they already psychologically act as if it's happening. Meanwhile, nothing is being said forcefully (even by the nominal opposition) to defend higher taxes and revenues that would save programs - Pell Grants, Medicare, Medicaid, environmental laws...or whatever.

The word is even leaking out that the Repukes want spending on water regulation cut, meaning an epidemic of cryptosporidium - such as struck Milwaukee in 1994- could easily occur again!

Meanwhile, investor demand for investment goods is largely hinging on their optimism or not. If investors are pessimistic (as many are now...because of the volatility of stocks) then they will withhold their investments.

Here's a numerical example of how this all works. Assume we have "full employment" (e.g. 4%) and it generates a total of $1,000 worth goods and services in a day. This is also the sum total of the profits and incomes the employees and employers share. Let households comprised of workers and employers use a large fraction (e.g. 90% or $900) of their income to purchase goods and services for consumption. The remaining 10% or $100 is saved but eventually purchased by investors as investment goods.

In this way, the stage is setting up for a major financial disaster, and a new recession or even depression.

Let's say at this point (as shown above) spending cuts -mammoth ones - are now imposed by a derelict government which thinks it can get a handle on deficits almost solely via cutting. Then, consumers will pull back even further and incomes will drop to the 50% level or $500. They will still spend $450 on necessities, and investors will not budge from their $50 investments. The total of aggregate demand is now $500 ($450 + $50) or 50% of the original. But because of the contraction there is no accumulation of inventory (unsold goods) even as services such as bars & restaurants go out of business for lack of clientele (after all, only 50% of the original income is now available!) We do see a kind of equilibrium restored, but because production is now at only 50% of the full employment level, unemployment is now 50%.

As a comparison, the maximum unemployment in the Great Depression hit 35%. The above scenario played out on the national stage for next year, shows a projected net loss of aggregate demand in the neighborhood of 40-50% if the Repukes get their way before Aug. 2nd and $2 trillion in nothing but spending cuts is used to "solve" the deficit and enable the debt ceiling to be raised. This translates into an unemployment level of more than 18% this time next year (30% real unemployment) and a new recession bordering on depression. Think the repukes will be happy? Hell, they'll be having wet dreams at the prospect of such an abomination (which they deliberately created) within months of the general election.

THIS is what we face if the Republicans get their way, and no taxes are a significant part of a deficit reduction package. This is why Obama has to finally take off the kid gloves and put on the brass knuckles! He's fighting as much for his own 2nd term as he is for the nation! That means not taking any repuke shit, but rather dishing it out to them! Acting "Grownup"? Hell, grown-ups don't allow themselves to be pushed around by 2-bit punks with an attitude.
Posted by Copernicus at 10:18 AM

Thanks for a long overdue article! This shows why it would be a catastrophe for Obama to yield to the GOP on this issue. If they adamantly refuse to give in on taxes, then Obama has to go to the wire and beyond and allow a default like Clinton did in 1994.

There's no other choice! If he gives in just to prevent a default, it will be all over but the dirges for him in 2012, and for our economy!