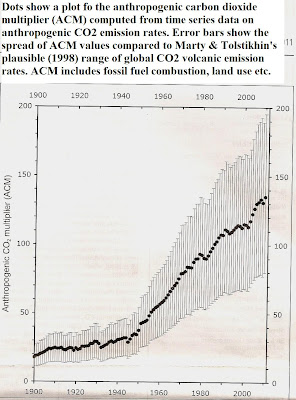 One of the claims often made by what I call the flat Earth or climate change denier brigade, is that volcanic emissions dwarf human fossil fuel or other related activity (e.g felling rain forests) in terms of producing CO2. This canard has now been fairly well shattered with the recent publication of a paper, Volcanic Versus Anthropogenic Carbon Dioxide in the journal Eos: Transactions of the American Geophysical Union( Vol. 92, No. 24, June 14, 2011, p. 201).

The essential data of the paper is shown in the accompanying graph, for which the dots show a time series of the anthropogenic carbon dioxide CO2 multiplier (ACM) calculated from time series data on anthopogenic CO2 emission rates and Marty & Tolstikhin's (1998) study of preferred volcanic emission rates. In their paper appearing in Chemical Geology (Vol. 145, p. 233) the latter authors gave a preferred estimate of 0.26 gigaton per year for present day global volcanic emission rate and injection. Their study encompassed CO2 emissions from divergent tectonic plates, intraplates (plumes) and convergent plates - e.g. displaying volcanism.

Moreover as the current Eos paper observes, their computations "assessed the highest preferred minimum and maximum global estimates, making them appropriate high end volcanic limits for the comparisons with anthropenic CO2 emissions covered with in this article".

Supporting Gerlach's 2010 projection and ACM data, is the just announced word - from Thomas Karl of The National Climate Data Center (see: The Denver Post), June 29, p. 4) that in their 'Annual State of the Climate Report for 2010', that year was "tied with 2005 as the warmest on record". According to Director Karl: "The indicators show, unequivocally, that the world continues to warm."

Meanwhile, the Eos paper puts the final nails in the coffin of the "volcanoes did it" excuse! It is also worth mentioning how the ACM data show an astounding rise in the CO2 multiplier from about 18 in 1900, to roughly 38 in 1950, which parallels the vastly enhanced use of automobiles as a primary mode of personal transport - with the planet now saddled with nearly 600 million vehicles! Every manjack in a third world nation even seeks to own one!

Interestingly the only volcanic event which even came close to human emissions was the eruption of Mt. Pinatubo in the Philippines in 1992. It generated CO2 emission rates roughly between 0.001 and 0.006 gigaton per hour, or closely approximating to the 0.004 gigaton anthropogenic per hour (e.g. based on 35 gigatons per year).Thus, as the Eos article observes:

For a few hours individual volcanoes may emit as much or more CO2 than human activities. But volcanic emissions are ephemeral while anthropogenic CO2 is emitted relentlessly from from ubiquitous sources..

Which means human activity is a vastly more significant source of CO2 and the major reason we are approaching a CO2 concentration (taken to be from 550- 600 ppm)that marks the threshold to the runaway greenhouse effect.

Let us hope humans are smart enough to get the message and act on it before it's too late!
Posted by Copernicus at 9:23 AM