Some Advice for the New Graduates! 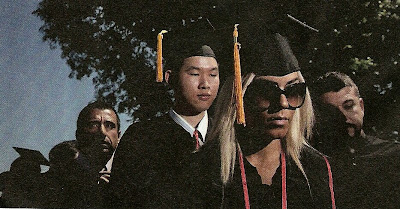 As graduating seniors pour out of their respective schools, eyes and minds agog with often fanciful hopes and dreams, it is well to parcel out a bit of advice. This is based on my own experience, that of friends and acquaintances, as well as twenty five years teaching at secondary and college level. Take it for what it's worth:

No, the world isn't quite your 'oyster'. You need to go further if you want to have a chance at bettering your own life. College should be in your sights, but with some provisos and cautions:

a) Don't assume an Ivy League education is better than one from a public or state university. Some of the latest stats (see, e.g. the last issue of MONEY magazine, disclose that it isn't. All you're likely to do is end up many tens of thousands of bucks in debt with only marginal or little enhancement of long term salary benefits.

b) If you do go away to college, break the parental tether for god's sakes. You're out on your own now, and independent - so ACT the part! You don't need to have mommy or daddy cell phoning you every day, or worse, you calling them. Hara Estroff Marano is the editor-at-large of Psychology Today and the author, most recently, of A Nation of Wimps: The High Cost of Invasive Parenting, has accurately observed that:

"in a real sense, students don't really leave their parents behind. Their parents go to college right along with them — in their front pockets. That is, the parents are a speed dial away by cellphone. And the evidence is clear that students call parents and parents call students at an alarmingly frequent rate. This, of course, significantly reduces independence. A student doesn't get the chance to solve minor problems on his own — he just calls Mom or Dad."

In other words, you never make those first critical steps toward genuine adulthood.

c) Take your time (but not too much) picking a major or area of specialization. Above all, don't just regard your college experience as a 'meal ticket' but rather the basis for an education that will be a lifelong experience, not merely stop when you get the degree. By all means try to expose yourself to courses in the humanities (if you're specializing in science) and in science if you're mainly taking the "arts, literature", etc. Remember C.P. Snow's The Two Cultures and the lessons learned therein, and how we need bridges between those disparate areas, not more chasms!

d) Don't make the mistake of making work the center of your college years! Up to 65% of college entering frosh later drop out, most because they made the error of trying to combine work and studies. Unless your major is basket weaving or something on that level (speech?) this isn't going to work. No more than 10 hours work per week- maximum!

e) Don't (again, for god's sakes) use the military as a means to get into college later! Many of those at Fort Carson, Colo. - when the many violent incidents and other suicide attempts, domestic and bar brawls etc., were investigated some 4 years ago- admitted they'd volunteered for military service solely with a view to later have a college degree. However, when called to go to Iraq or Afghanistan, and totally unprepared for the experience, they were psychologically unable to come to grips with it. They'd never seen themselves as WARRIORS first (which is what they were) as opposed to "future beneficiaries of college".

In a crappy economy, the military services and DoD depend on kids of few means to make the major error of seeing only the benefits (which recruiters inevitably inflate) and not the many downsides IF their hearts are not truly into joining! By all means join a military service, if that's the primary thing or objective you have. But don't use it as a secondary means to get an education "on the cheap"!

There are ways and means to get a higher education without breaking the bank, if you are smart and resourceful enough, and they don't always require depending on your parents.

f) Leave online colleges as an absolute last resort! The evidence is that those who opt instead for community colleges (to obtain the A.A. degree and later move on to a 4-year school) do better financially and with much less debt than those who take the online, for profit college route.

a) Don't go straight to 8 - 6 work, or try to find a work niche right after graduation. Use the time to explore the world, say by personal service - in 'Teach for America' or the Peace Corps. Broaden your horizons, and get differential, wider experiences in different enclaves from those you came from. It may be the last chance you ever have before joining the work-spend treadmill.

b) Speaking of spending, make it your top priority to be a saver, not a spender. Ditch the consumer ethos, and put away as much money as you can as all the economic signs indicate you will need it in a prolonged down-speed "2% economy". (E.g. no more than 2% growth from year to year).

c) Jobs: Unfortunately, the projected job scene even for college grads is dismal. Thank the 'Dismal science' of modern economics for that with their myopic emphasis on "efficiency" and "productivity" - which more often today means doing the same work with many fewer people. Workers, even brain workers, are now looked upon as millstones around companies' necks, especially in terms of their benefits. Be prepared then for a varied and complex "activity horizon" which may include brief periods out of work (when you can volunteer)alternating with actual working in paid remuneration. Be prepared also for China to be the future superpower and having to compete against her best and brightest as well as your own countrymen.

Sure, the computer tech scene will always need more good brains to help. But be mindful you're still going to compete with top notch Indians in Bangalore and Chinese from Beijing, who are prepared to work for $14 an hour instead of $24 or $30, and no benefits besides!

d) Be prepared to adjust to a world radically different from the one we're in now. Be resourceful enough to anticipate how you'll handle a world, nation in which gasoline is regularly $5 or more per gallon, as Peak Oil hits, even as the climate alters much more radically for the worst because of climate change: long heat waves, many more hurricanes, floods and tornadoes, as well as possibly catatrophic rising seas. Get insurance for these events, by all means, but always look carefully before you sign the contract.

e) Be wary of investments as the investment shills, hawks and parasites are still out there trying to make a killing....or fleece the uninitiated. Be sure you understand how any investment you make works, or else leave it out if you don't. The stock market, despite all the hype, is still on very unsteady footing (more on this in the next blog) and one must be prepared to lose big if you have a sizeable chunk in it.

f) When (and IF) you do marry, do it for the right reasons: look for a best friend and soul mate, not just a hottie sex partner. The sex frenzy will wear off too soon, but you will still need a deep and abiding connection and foundation and that means an ability to communicate with each other, even argue - but with positive overtones, not with undercutting belittling and meanness of spirit.

Make sure, BEFORE you have any kids, you BOTH agree on having them! If only one does, and the other is just going along to get along, watch out.

g) Don't base your success in life on how rich your college education made you. Look on your whole life, in terms of its richness of experience - including educational, academic broadening - as your payoff. If you can, keep your mind-brain sharp by taking open courses, such as from the Yale University Open Courses, or the MIT open courseware.

Don't let your mind or your curiosity rot! (And if you feel it might be, use the Rx of checking in here at Brane Space.....whenever needed!)
Posted by Copernicus at 4:26 PM