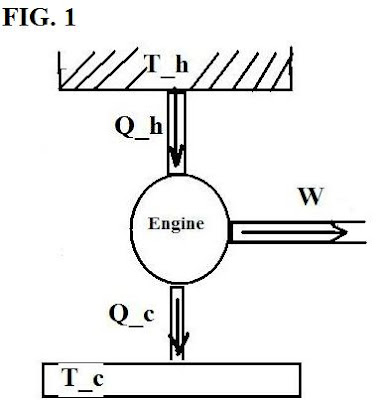 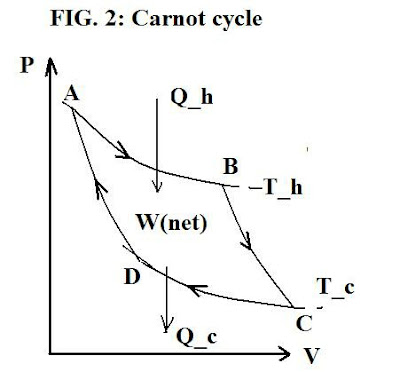 In this blog I want to look at what might be called the heart of thermodynamics: the nature of heat engines and the 2nd law of thermodynamics. Let's begin with the basic definition of a heat engine: a device that converts thermal energy into useful forms such as mechanical and electrical. More exactly, it's a device which carries a substance through a cycle, during which:

iii) Heat is expelled by the engine to a source at lower temperature (T_c). This expelled heat is denoted by Q_c.

An illustration is shown for such an engine with respective sources in Fig. 1. Again, the net work done is equal to the net heat flowing into the engine or W = (Q_h - Q_c) where the net heat Q(net) = (Q_h - Q_c). Note also that since the working substance (fluid or gas) goes through a cycle, the initial and final energies are equal and hence, delta U = 0. If the working substance is a gas, the net work for a cyclic process is just the area enclosed by the curve representing the process, e.g. on a P-V diagram.

The four components of the cycle are as follows:

Note the general thermodynamic efficiency of a heat engine is:

It can be seen that a heat engine will only be 100% efficient if Q_c = 0(i.e. no heat is expelled at a cold temperature). However, since every process known generates some kind of heat, which is inevitably left over, this is impossible. In practice, all heat engines convert only a fraction of absorbed heat to mechanical work, e.g. for the typical auto engine an effiency of 20% is practical, maybe a bit more (25%) on newer engines. If e = 20% that means 20% goes to useful work, say in propelling the car, but 80% is expelled as waste heat. (That is, 4 out of every 5 gallons you use of gasoline goes into producing waste heat. So if you pay $5 a gallon, you are burning up $4 as waste heat.)

This brings us to two general statements applicable to heat engines-cyclical machines, that provide a basis for the Second Law of Thermodynamics:

(I) The Kelvin -Planck statement:

It is impossible to construct a heat engine, operating in a cycle, which produces no other effect than absorption of thermal energy from a hot reervoir and the performance of an equal amount of work.

Does a refrigerator not qualify? NO! Because it is simply a heat pump (cf. Fig. 1) operating in reverse. Thus in this case the engine absorbs heat Q_c from the low temperature or cold reservoir and expels heat Q_h to the hot reservoir. In other words, it can be depicted by Fig. 1 with the thermodynamic arrows reversed. Then, the work done is: - W = Q_c - Q_h or, Q_h = Q_c + W (e.g. heat given up to hot reservoir equals the heat absorbed from the cold reservoir).

It is impossible to construct a cyclical machine that produces no other effect than to transfer heat continuously from one body to another at higher temperature.

This scale follows logically from the conditions with which we've become acquainted. We can arrive at such a scale by consideration of the fact that at the defined condition of "absolute zero" Kelvin temperature, there is no heat energy, period. That is, no molecular or other motion even at the atomic scale. On a practical basis, this scale will be based on careful measurements of heat used or expelled, and corresponding temperatures such that:

In other words, this is the theoretical temperature of a reservoir in which a Carnot engine will expel no heat. But it is impossible to attain, because the THIRD Law of Thermodynamics (proposed by Nernst, otherwise known as the Nernst theorem), prohibits any object from being cooled to absolute Kelvin zero. As temperature reaches zero, entropy (or the state of microscopic disorder) also reaches zero, but this is impossible in the real world. Or another way of saying it, it's impossible to wring every last bit of heat energy from any object or system. If one were to achieve this, the object would no longer exist, all its electron and atomic motions would halt!

(A)The Otto cycle applies to gasoline engines. We assume an air-fuel mixture approximates an ideal gas. The efficiency of this engine is given by:

(B) The 'coefficient of performance' for a heat pump is defined: COP = Q_h/ W.

The coefficient of performance for a refrigerator is defined: COP = Q_c/W. Given that the COP of a fridge = 5, and 120J is absorbed from the cold reservoir, calculate: (i) the work done W, and (ii) the heat released into the house at the warm rservoir.

(2)Suppose that a nuclear plant generates heat in the amount of 2 x 10^7 J from its fuel rods at a temperature of 1200C and delivers it to a specialized condenser at 140C, to drive a turbine. Assuming the basis of a Carnot engine and cycle, obtain the efficiency for this exchange. Estimate the amount of heat lost from the plant if the actual coefficient of performance is 1.01

(3) The surface temperature on the planet Mars varies from 183 K (night time) to 268 K (day) near one of its poles. Obtain these temperatures in Celsius and Fahrenheit temperatures. (Note for the latter, take: F = 9C/5 + 32).

(4)A heat engine operates in a Carnot cycle between 80C and 350 C. It absorbs some 2 x 10^4 J of heat per cycle from the hot reservoir. The duration of each cycle is 1 second. Find: (a) the maximum power output of this engine, and (b) the amount of heat it expels at each cycle.

(5) A heat pump powered by an electric motor absorbs heat from outside at 5 C and exhausts heat inside in the form of hot air at 40 C. Find: (a) the maximum coefficient of performance of the heat pump, and (b) the fraction of the theoretical work actually done if the COP = 3.2

(5) Technically speaking, the 2nd law of thermodynamics applies only to closed systems. Solar radiation injects on average 1360 watts per square meter onto the Earth's surface, or 1360 J each second per sq. meter. Given this fact, and that plants absorb a good deal of this for the process of photosynthesis, show why the creationist argument that "evolution violates the 2nd law of thermodynamics" doesn't hold up. (Hint: NO quantitative work is needed!)