The Myth of "Mismatched" Jobs & Skills 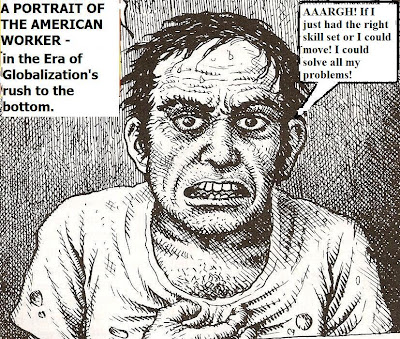 It is simply incredible the spin put out by some of the pundits on the reasons for the continued relatively high unemployment. The new myth making its way across the punditocracy is that too many unemployed lack the skill set to be matched to the jobs available. If only, only these forlorns had that missing skill set, they'd probably get a good job and bring the unemployment rate down....maybe to even 7.9%. This is codswallop, but those like Robert Samuelson in his latest column, seem to have no problem peddling it.

According to Samuelson, Economist Harry Holzer of Georgetown University "thinks the unemployment rate might be closer to 8 percent...if most of those jobs were filled". And in which of Holzer's dreams, may I ask? Meanwhile, not to be outdone, IMF economist Prakash Loungani estimates 3 million jobs could be filled if workers just had the right skill set. Then, McKinsely Global Institute - in a claimed survey of 2,000 firms - found that "40% had positions opened for at least six months".

Really? So all that $2 trillion the corporations are still sitting on would just be freed up if they had the right workers?

TIME in its May 20 issue (p. 36) notes two elements that only appear to have been superficially covered by most academic economists and which are playing new roles in engendering an American jobless future:

1) The re-definition of productivity: that is, productivity is now defined by "cutting jobs and finding ways of making the same products with fewer people". As pointed out by the author (F. Zakaria): "At many major companies profits have returned to 2007 levels but with many thousands fewer workers".


These are ominous forces, and any American (including economics prof or pointy-headed bureacrat) who still insists on wearing rose-colored glasses has only himself to blame if blind-sided. It's clear that these coupled forces are the major impediments to job creation and will continue with no imminent signs of abating, unless some hidden, unfactored counterforce causes one or both to halt.

So where have the sources that Samuelson cites obtained their info, and how reliable is it? First, having had experience doing some occasional company surveys, I can assure Samuelson that 99% is bullshit. Most companies when confronted by some question seeker simply pull numbers out of their asses. If you asked one single company to perform a total quality analysis and verification of the data, it wouldn't know whether to shit or go blind. So, I would trust those surveys about as far as I would to trust Jim Inhofe to help solve the global warming problem.

As for the Georgetown prof's ruminations, one can only go back to what I already wrote about the infatuation with most econ academics with the Pareto distribution. Somehow in his mind's eye he's dreamed up an ideal Pareto -dominated world in which 8% unemployment will appear if all the jobs are Pareto- adjusted. What does that mean? It means jobs with no benefits, probably no paid overtime, and absolutely no sick days - as well as no family time, with possible firing if one succumbs. Who in the hell would want such a job, especially if the pay is still bottom feeder low? (Stay tuned for a future blog wherein I will take on the whole sordid world of work addicts, workaholics, and latter day Calvinists who glory in work and have created a perverted work ethic more akin to 18th century slavery.)

Indeed, as Jeremy Rifkin once observed in his masterful tome, The End of Work, the ideally efficient work format for any company would be ZERO workers, and all machines, OR human slaves willing to work for next to nothing, and with NO time off. Well, think of the late Dark Ages there!

But this mode of thought has carried forth, fueled by conservative 'low wage' whackos who believe all the unemployed are simple slackers, not that they have a family with 8 mouths to feed (and a mortgage) such that a scut job at $8 an hour might not cut it (or even two such jobs- working 16 hours a day!)

Anyway, from my own sources, based on the rate of out-shipment of jobs overseas, it appears that if there are 155,000 available high quality jobs, that's a lot (but not enough for 14 million unemployed). There certainly aren't "3 million"! Many of these are in the computer -tech business, but let's not forget that with 11,000 Indians graduating every year from the Tata Institute and Indian School of Technology, most of those jobs are rapidly taken....by Indians.

Finally, let's kill this bullshit that workers are unwilling to move to take jobs. Samuelson, for his part, whines that "work is mobile, workers are not". So WTF? Workers are to pack up and freaking move every time they're downsized? Are you effing nuts? You ever heard of mortgages? Having to sell one home before you have the moola to move to another place. Oh, and then there was the famous case of the poor guy who moved lock,stock and barrel from Cleveland to Denver....and ten days into his new job, was told his skill set didn't quite match and they didn't need him after all.

Samuelson and the other cyborgs need to bear in mind that people - most of us- only have limited resources, and can plan a career trajectory for only one, at most two (potential) training arcs, no more. For example, in the late 60s hundreds of thousands hitched their career wagons to space and the future of space. They did the aerospace engineering trajectory or the physics-astronomy one for theoretical research. But...when the space program was mothballed...in the Reagan era (he preferred to waste $100 b on 'Star Wars') that was more or less it. Those people had already invested most of their available money and life's energy on that career and it left them with nada...as the space workers at Cape Kennedy are to learn after the final shuttle flight in 3 weeks.

In a way, this "creative destruction" of capitalism is what's really at fault. It tears all ties that bind, family bonds and does it continuously. It also breeds the transient, uncommitted state of mind which itself often incepts the most perverse aspects of our culture - from suicides, to mass murderers (e.g. check out the movie, 'Rampage') to serial killers. Probably no one has expostulated on this better than Morris Berman in his assorted monographs, from Dark Ages America: The Final Phase of Empire to The Twilight of American Culture.

Before Berman, Charles Reich nailed the country's pathology in a number of chapters of his Opposing the System showing just how badly fucked up we are as a nation. As he put it in one of his paragraphs:

When society itself comes to be modeled on economic and organizational principles, all of the forces that bind people together are torn apart in the struggle for survival.

Community is destroyed because we are no longer 'in this together' because everyone is a threat to everyone else.

So true, but this is what the economic organizational model has imposed on us, to the point now we are to call no place 'home' and instead put finding some temporary work above even domestic stability. Then people wonder why we have 30,000 homicides and suicides a year, and mothers killing their children (news stories) about every other week. What do you expect in a nation that now places a premium on transience as it disdains any sort of cohesive community? One nation? Hell, don't make me laugh! Most of the time we're 300 million atoms each vying for survival in the dog-eat-dog capitalist consumer matrix, one step ahead of suicide...or downsizing, joining the unemployment lines. At which point nobody still working wants anything to do with us lest they catch our "disease" ...which is really dis-ease.

In such a capitalist-driven, consumerist organizational economic model, wherein the resource “pie” for the non-wealthy elite grows ever smaller, the young are threats to us oldsters, as we are threats to them, as neighbor is to neighbor. It can't be otherwise. This capitalist model has seen fit, in other words, to destroy our areas of commonality and common cause. In effect, U.S. capitalism creates a self-destructive, wasteful culture that translates into a self-destructive and wasteful social pattern.

Repeated untold millions of times, one gets an entire toxic culture, and diseased society. This is, in effect, what we are seeing when we re-enter the U.S. after long stays in normal countries, that hold the commonality in esteem, rather than attempting to fracture it into millions of pieces. Thus, the best analogy I can give to what is occurring in the U.S. is a malignant cancer. As in cancer, when one limited group of cells grows too much - it does so at the expense of the whole body. So also in the U.S., when run amok crony capitalism enables a tiny elite segment of the body politic (and social ) to run amok at the expense of the health of the whole.

Sadly, the tale of history is that diseased cultures and corrosive societies do not last. The U.S. is - in that sense- now on the respirator, and hasn't too long to go.
We will see just how long when the need to increase the debt ceiling arrives, and the repukes use it to hold the nation hostage to their demands, and threaten to vote
'No!' putting us all in jeopardy.

Meanwhile Samuelson and his clones will regale us with more stories on how we could just find a job if we developed the right skill set....or were prepared to move 1,500 miles at the drop of a hat. Never mind the mortgage!
Posted by Copernicus at 1:45 PM