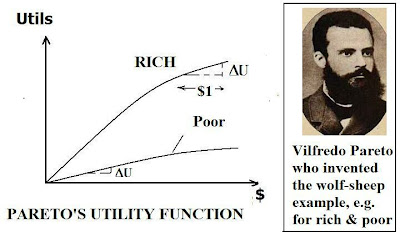 "Assume a collectivity made up of a wolf and a sheep. The happiness of the wolf consists in eating the sheep, that of the sheep in not being eaten. How is this collectivity to be made happy?" - Vilfredo Pareto


For years I pondered the inverse logic of markets and economics and why in the hell they made no sense. Even my sole course in Economics, taken in high school, never addressed this, preferring merely to examine stock answers (and stock questions!) Even now, the stand on your head "logic" seemingly implicit in capitalist markets boggles the mind. For example, U.S. health insurers are judged on their competence not by how many people they treat but how many they don't have to treat. At the same time nearly $1 in every $3 goes to administrative paper pushing, not health care. Meanwhile, the unemployed are probably the biggest potential users of any federal dollar, so why are they not given more extended benefits to spend that money (especially in a poor demand market) while the rich are given more tax cuts they don't need? WHY are employers now putting out notices that: "the unemployed NEED not apply, only the ALREADY employed". And finally, if natural resources like forests and water make up our natural wealth base, WHY are they not counted as costs or at least liabilities once chopped down, used up or polluted?

Not until I uncovered the "Rosetta stone" of modern economic theory was I able to look on and see the inherent problems, then it all made sense....including the disgusting extension of the Bush tax cuts which merely explodes the deficits further. People will want to first read Vilfredo Pareto's description of the wolf-sheep "collectivity" at the top. Pareto is the one who basically put forward the Pareto distribution, and also the form of economic efficiency known as Pareto efficiency. As I will show, this perverse meme underlies nearly all modern economic theory and governs nearly the whole universe of economic behavior from whether people should have rent subsidies, to whether higher deductible and co-pays ought to be implemented for medical care.

The basic insights may be derived from the Cumulative form of the Pareto distribution which is shown. This is hlghly simplified to try to make it more understandable. Basically, we are graphing "utils" or nominal units of "utility" on the vertical axis, vs. value of dollars used or consumed along the horizontal. The curves are displayed for two populations, one "rich" (say earning in the top 1% or $340,000/yr.) and the other "poor" (earning about $14,000/yr.). The key aspect to note is the width corresponding to the "delta x" portion of the gradient (delta U over delta x) which translates into the net dollar's worth for each population. As readers can see from inspection, the width of $1 for the rich is significantly longer than the one for the poor. This translates into the argument that the buck is worth more to the rich man, and hence, any transfer from the rich to the poor hurts the rich more than it helps the poor (especially as the 'utils' for the poor man is also rather smaller by comparison).

Thus, by Pareto's original example (in quotes): Allowing the wolf in the wolf-sheep combo to EAT the sheep expresses less overall "hurt" or pain on it than permitting the sheep to remain unscathed, thereby merrily prancing away eating its grass while the poor wolf starves.

Of course, let me hasten to add here, that nowhere is Pareto's original quote on the wolf-sheep combo given in any standard university economics texts. God forbid any students draw the wrong conclusion and infer that modern economics is consigning the poor to be sheep for the rich wolves. But, as a matter of fact, that's fairly close to the truth! Hence, my use of the term "evil" - which, believe me I don't use very often.

Now, the next section is mainly for technical wonks or statistics junkies and may be skipped by others. In the case of the Pareto, one simply requires that the probability density function and the distribution function are, respectively:

defined over the interval x>= b

One then ensures that the mean, variance and kurtosis obey:

Once an assembly of data comports with the above it will be a Pareto distribution!

Thus, to get a Pareto one need only manipulate the data so that the a's, b's etc. of the datasets fall into mathematical line. This isn't rocket science. The point is the distribution need not be any intrinsic feature of reality of all, and we have no way of knowing unless genuine empirical tests get at the underlying numbers. My suggestion is that the Pareto is of such benefit to the wealthy and justifying zero redistribution of their wealth and assets that it's almost incomprehensible economists wouldn't "jigger" it in their assorted papers. (Especially if they're being funded by the same wealthy!)

But let's move on to cases. One other important concept in this mix is what's called the reservation price for a given object or service. Ultimately, along with the Pareto distribution, this factors into what is called the Pareto efficiency. This is just the maximum price a person is will to pay. So, if I have a 1954 Henry Aaron TOPPS baseball card (now with a very high book price) and I offer it to you for sale, and ask what the top price is that you'd pay, if you respond "one hundred dollars" then that is your reservation price.

The same may apply for rent. So let's say a new apartment complex opens up and is selling apts. (1-3 bedrooms) ranging from $1,500/month (for single Bdr) to $2,400 for 2 Bdr, to $3,600, and people want to buy. Obviously, a relatively poorer couple will have a reservation price probably lower (e.g. $500) than any of the apartments, and hence need a Section 8 HUD rental subsidy to offset costs, while the rich couples or families can move into any of them.

But, according to modern economics and the Pareto distribution, offering a rent subsidy on the order of $1,000 (for the single Bdr apt.) effectivly removes it from the actual competitive market and say, a rich couple that can pay the full price of $1,500. Hence, the loss of $1,000 rent makes it Pareto inefficient. Thus it is that modern economics frowns on rent subsidies. (Another way to say this is that the poor couple receives a "consumer surplus" of $1,000 which they didn't earn).

Now, moving along with these Pareto efficiency examples, some readers may recall that former Fed Chairman Alan Greenspan went on record in an appearance before congress (in 2003) as asserting that "Social Security benefits need to be cut to pay for Bush’s tax cuts." what on Earth was the man thinking? Well, he's thinking on the basis of Pareto efficiency!

Social Security payments, especially with COLAs, do everything the Fed Chairman didn’t want. They pour more money into the economy, but not via productive labor or market indices, returns. People receive their checks merely by existing and breathing day to day, and having paid into the system with FICA deductions. Even then, they receive far more in benefits than actually paid in, making a total mess of "utils" earned. In a way, the Social security recipient (in the eyes of this Pareto-riguer bunch) are like the rent subsidized couple with their "consumer surplus". Worse, the S.S. COLAs increase the non-productive payments each year, one reason why – back in 1997 – Greenspan demanded an artificially much lower COLA increase than had originally been proposed. (And which certainly doesn’t reflect seniors’ increased costs for medical treatments and prescription drugs).

Greenspan had surmised – correctly in terms of Pareto Efficiency – that the Bush tax cuts accomplished the same for the well off. The cuts poured more money into their hands each year, but actually allowed them to keep more of their higher valued dollars and the associated utility. Greenspan obviously reasoned, based on his 2003 Senate Banking Committee testimony, that it made more fiscal sense to let these wealthy keep their ill-gotten gains from the tax cuts, than to preserve Social Security and reward the unproductive (and mostly non-investors) with unearned compensation. In terms of both magnitude of the wealthy's "utils" and greater worth of each $1 they got, it was more Pareto Efficient!

What about health care? How does it work there? The clue was revealed by Academic Economist (and former Reagan Advisor) Martin Feldstein, after being awarded the presidency of the American Economic Association in 2004. A large part of his address was devoted to the issue of health insurance. Feldstein made the case that health care is in trouble in this country because deductibles and co-payments are too low, and as a result people (mainly the non-wealthy partially subsidized by health insurance) over use the system and go to the doctor too many times.

From a reservation cost perspective, let's say the productive cost of the typical primary care physician's visit is $150. This is what she charges, or what her affiliated Care center does. The non-wealthy person (having shelled out $250 for an insurance deductible) is then happy to pay only $15 for a co-pay. But this skews the system and makes it Pareto INEFFICIENT. If one therefore takes the difference ($150 - $15 = $135) it makes more sense to just give the unwealthy person say $134 NOT to visit the doctor and consume resources. Those resources are better left to the rich who can afford to pay the full reservation cost with no problem.

Same thing here in getting a preventive test, say a colonoscopy which normally would run $3,500. But there's no way the insured regular patient can afford that total cost, most of which his or her insurance picks up. But, in Feldstein's calculation - based on Pareto Efficiency- if the insurance paid part is $2,000 (while the patient's reservation price is $1.500) it makes more sense to give the prospective testee $1,499 NOT to get the colonoscopy, than to let her get the test and consume valuable specialist time and resources via $2,000 subsidy.

The same scheme can be carried over to environmental considerations, especially say, in implementing global warming regulations or altering behavior - say to cut carbon emissions. Since the lives of all the poorer segments of the populace are worth less in terms of their $ capacity-dollar use (as well as their "utils") it makes more sense to allow more of them to perish from climate-caused catastrophes (say more flooding, twisters or hurricanes) than it does to cause harm to the rich by exacting carbon costs which will upset their commodities markets. Thus, having 1,000 - 10,000 average Joes and Janes die each year is still more tolerable than having oil speculation losses for the rich, because then they will also pull back on their investments in ETFs (exchange traded funds), hedge funds, and all the rest ....ultimately ending in less investment banking profits and perhaps another financial collapse.

By a similar line of perverse Pareto reasoning, it makes more sense for the impoverished billions in the third world to breathe filthy, polluted air than clean air. The reason is obvious: it is inefficient because if they had to pay for it, they couldn't afford it. By the same token, it makes more sense to dump the toxic wastes from advanced nations in poor nations than vice versa, because the same reasons apply: the 3rd worlders would never be able to afford their own clean up costs, so what's an extra five million gigatonnes of waste in the overall scheme of things? Analogously, it makes more sense to ship cheap factory jobs with collateral health issues, e.g. producing toxic, carcinogenic fumes etc. to poor third world nations where there are few environmental or health standards than keep them in the U.S. where the regulatory costs would be punishing, OSHA's looking just around the corner....and hence, Pareto inefficient.

As I said, the basis of an evil economic system. Next, we look at the Laffer curve!
Posted by Copernicus at 2:37 PM