Is Rick Perry an Idiot? Or Just a Political Posturing Fool? 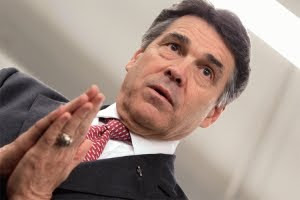 The news cycle keeps dredging up more and more abundant evidence that, as comedian Bill Maher has put it, we're largely a nation of F&%#$@*G Idiots! First, there was Anthony Weiner (who I used to have loads of respect for), getting unhinged on his Twitter and sending lewd shots to assorted females (none his wife). Are you kidding me? Hey, dimwit!You were one of the last articulate voices on behalf of all the liberal Democrats still around, and now you squander all that political capital? Get real!

Then there was the ever moronic Sarah Palin at her best recently in New England, when she was asked about what the visit meant to her and she blurted out a whole pile of comic revisionist bunkum about Paul Revere. That, get this, he was riding out to "warn the British"! She made it worse by attempting to re-do and justify her tommyrot, and things haven't gotten better since hordes of Palin Zom-bots have attempted to invade Wikipedia and alter the history concerning Paul Revere to reflect Palin's stupid take. Fortunately, they've padlocked the site, and we can only hope the Palin groupies will be permanently kept out lest they totally soil it.

Finally, we come to Texas Governor Rick Perry, the same bozo retard that some time ago put up an argument for his state's secession from the Union. (My temptation was at first to say, 'Fine - just don't let the door hit you in the ass on the way out!', then I remembered Texas does have a few --- very few--- things, worth redeeming, including the NASA Johnson Space Center in Houston).

Anyway, most recently Perry raised some eyebrows when he officially declared three "Days of Prayer for Rain in the State of Texas," which has been plagued by drought. Well, join the rest of us in the Mountain West. But you won't find us getting on bended knee but rather examining the issue of climate change (which is responsible for the drought, as the NOAA has made clear and also further projected)and what behaviors can be used to alter the conditions. One is use less fossil fuel, but since Texas is still a big Oil state, we doubt Perry would resort to that. Easier to call on a guy dead over 2,000 years for help!

Unfortunately, these days Perry has emerged as a pundit-approved Possible Presidential Contender (Pretender?), and is taking his advocacy for public prayer a step further -and in a distinctly non-inclusive direction. This a-hole, like so many of his ilk (including firebrand wannabe pastors) has called for a day of prayer and fasting to be held at Reliant Stadium in Houston in August. In a letter on the front page of the event's website, Perry blathers:

"Right now, America is in crisis: we have been besieged by financial debt, terrorism, and a multitude of natural disasters. As a nation, we must come together and call upon Jesus to guide us through unprecedented struggles, and thank Him for the blessings of freedom we so richly enjoy."

Are you effing kidding me? Does this turkey truly believe that calling on a guy dead for over two millennia will help the nation, or Texas? Hardly! The problems this nation faces are of its own making, and they can all be solved by using an objective reality-based approach, not appealing to supernatural beings or supposed "saviors". Perry, despite grandstanding, ought to know better than such blatant god-mongering. But then, what else can you expect in a nation in which 9 in 10 believe in supernatural, superstitious drivel?

The problem is these Jesus freaks, who appear to crop up mainly in the South- like so much mold- actually believe their own BS. They really think that by mumbling some words to imaginary entities they can alter reality, as opposed to actually going out and doing the hard work, including ditching the existing economic models (based on the Pareto Distribution) which I will show in future blogs are largely responsible for our fiscal mess. In addition, we could pull the plug on terrorism by ceasing to be terrorists ourselves, including the continued killing and maiming of innocents in Afghanistan. (Such as the recent NATO strike that killed 11 including kids). Solve terrorism? Easy! Get our butts out of that part of the world! We have much bigger fish to fry right here in this country, which has been ignored too damned long! In any case, those two occupations in Iraq & Afghanistan are part of the reason our finances are being drained dry (to the tune of $690b a year) and we're having to borrow more $$ from the Chinese? HOW is that advancing our domestic security?

As for the "blessings of freedom" - try to run that one past all those who have been victims of searches and seizures violating the 4th amendment, or who are spied upon daily using micro-video cameras at their places of work. Or those who innocently go online and who are tracked relentlessly by dozens of faceless, grubby and greedy corporations seeking to gather every and anything on them! One thing this country knows how to do is talk "freedom" and so forth, but walking the walk is usually a lot harder. Just ask Ward Churchill how far his exercise of freedom of speech got him!

Finally, the last insult Perry adds is about what I'd expect of some Texas bean-picker (or is it nose picker?):

"there is hope for America ... and we will find it on our knees."

No, you dog-faced dipshit, we will find it using our brains! If we have any left and the collective IQ hasn't totally dropped to room temperature by the time this blog's finished!

Let's just hope this asshole is knocked out early from any presidential nomination. Having the prospect of the ditzy, half-brained know-nothing Sarah Palin running is bad enough.
Posted by Copernicus at 3:03 PM