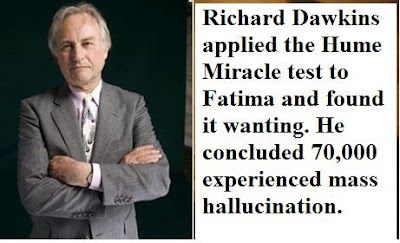 It appears a certain FLA pastor takes issue with my definition of miracle, and also the basis I provide for what I refer to as a “miracle report”. Let’s examine his complaints and see if any have merit. He writes:

“In true atheist form and fashion , one friendly neighborhood atheist blogger did just that - says miracles are impossible ( since he obviously claims he don't believe in God's existence ).”

Now, I never said they were outright “impossible”. I said that miracle reports are valid (and exist just like UFO reports do) but must be supported by extraordinary evidence since an extraordinary claim has been made. Even if no extraordinary evidence is available, a first threshold test is the Hume miracle test, as Richard Dawkins applied to Fatima (in his book, 'Unweaving the Rainbow'). That is, given two competing claims for an anomalous event(one for a "miracle" the other for a very unlikely prosaic cause) one always accepts the prosaic unlikely cause in the absence of extraordinary evidence for the "miracle".)

As for unbelief in “God’s existence” – no! I simply withhold acceptance of the CLAIM made for it, since again, the believer has neither defined the 'God' he proposes, or provided compelling evidence for it!

“Hey , BOZO...we HAVE shown y'all PROOF! It's called the BIBLE! Simply because you choose not to accept the proof , doesn't make it invalid.”

No, that doesn’t qualify as any proof. Proof can’t be anecdotal. I mean, would YOU accept an anecdotal account of a UFO as “proof”? Hell no! You’d want to see the nuts, bolts, cockpits and alien bodies if possible! And being found in the bible is no litmus test for reality. One must have further backup tests to ensure what’s being reported is the truth, not merely a later insertion (putting words in witnesses’ mouths) or exaggeration!

Granted, it would perhaps be unreasonable of a physicist to ask about the actual measured initial and final mass of loaves and fish (to verify a violation of the conservation of energy-mass in the feeding of the five thousand), but what has he left? The blind acceptance of the word of the scriptural author who probably has his own agenda? How can anyone be certain that no other loaves and fish were introduced from outside, or from within the gathering?

Unless these questions are satisfactorily answered, the miracle report cannot be interpreted as anything other than allegory, or a poetic metaphor. It would be patently unjustifiable to demand that a physicist (or other scientist) forego all appeals to scientific methodology and uncritically accept the claim as truth simply because it appears in an ancient manuscript whose quality control history is highly dubious (e.g. 80% of the New Testament is comprised of inauthentic sayings or teachings of Yeshua, by the Jesus Seminar's analysis).

The approach of the scientist is much like that of a very cautious journalist: "The facts please, and nothing but the facts." I accept, of course, that it is perhaps impractical to expect that if such a "miracle" did occur - the gathering would be occupied with counting loaves or fish or providing measurements and scientific controls.

But saying this does not imply I am relieving the miracle claimer of shouldering the burden of empirical proof. In the end, he is introducing the novel phenomenon - which contravenes established scientific laws - into the cosmos. Those who would add to established reality, are obligated to justify the need for proposed additions.

The alleged miracle by which Lazarus was brought back to life is a serious violation of the entropy law (2nd law of Thermodynamics). A truly dead body (not near death!) is in a highly disorganized state, indeed it is in a process of decay. The entropy law makes clear that the associated molecular energy changes are irreversible, and that the tissues and cells of the body's organs can never again recombine or participate in metabolic processes which require useful energy. There exists no medical or other evidence that a dead individual (certainly for 2 or 3 days) can return to life. One can choose to believe it, of course, but this belief is devoid of any scientific support. This means any reported witnesses were likely fooled or tricked. Even back then, for instance, there may have been potions (such as we know exist in Haiti) that can make a person APPEAR to be dead, then later revived.

Apart from the above considerations, there is no logical reason to invoke miracles to support a uniquely divine plan in the first place. Paul Davies, for example, notes that apart from convincing the rational skeptic that such phenomena can occur, the believer is faced with the added burden of:

“convincing him that miracles are in any way connected with God. This means either accepting all supernatural events (even the unpleasant ones) as the work of God or somehow establishing a clear distinction between God's miracles and the
rest” (Which entices the skeptic to ask: How do we consistently discriminate a Satanic miracle from a "holy" one? What IF the Gnostics are correct and an evil god- Demiurgos- is the one written about in the "good Book"? Then all the 'miracles' would be demonic ones intended to foist belief in the Demiurge!)

The pastor then waxes facetious:

“GOLLY GEE WILLICKERS ,WALLY - he's right! I DID forget to define
"miracle" didn't I? Shame on me for assuming that an individual who professes to
have such high academic credentials would already know the definition”

But see, you can’t do that! It's not cricket! Whenever you're forging a proposal or a premise, e.g.: “Miracles are real”, “God is Real” etc. you are the one obligated to provide your definitions! You can’t assume mine will be the same as yours. So, in effect, by refusing to provide yours you attempt to prevent being ‘boxed into it’.

Academic credentials figure not at all in my trying to read your mind as to YOUR definitions. If you don’t know your mind enough to define what YOU are discussing, I can’t be expected to do it for you!

HE then veers to the indirect ad hominem:

“But , I forgot , he had briefly attended a neo-Nazi Jesuit college in New Orleans before completing his "degree" in some other "college" located outside the U.S. somewhere in a "VOODOO" country. Given that , I can certainly understand why he wouldn't know the definition of "miracle" - my bad , sorry.”

The Jesuit University, Loyola, is consistently ranked among the top 50 private accredited universities in the South. It is known for remarkable scholarship including being the home of the physicist (Dr. Carl Brans) who with Robert Dicke mounted the first serious test of General Relativity.

The other university to which he refers is the University of the West Indies, affiliated with the University of London in its founding charter. I guess if I knew nothing and was pursuing online studies, I would also believe London was based in a “Voodoo country”(not realizing the British West Indies were all British colonies until relatively recently) - while Barbados (where the main university is based) - possesses the OLDEST parliamentary democracy in the hemisphere!

“So , the SECULAR definition of "miracle" is”

Yes, there does exist a SECULAR definition which is the REAL one because it’s apart from a biblical legendary one!

The actual secular definition is: “A claimed or perceived pathological event that overturns one or more laws of nature or physical principles.”

Again, the definition assures we don’t accept the alleged event at face value!

He continues his ramble:

Now , I don't expect him to accept even the secular definition above , as you can see , it states "ascribed to a supernatural cause." Oh..Oh...he don't want nuthin' to do with anything that could be "supernatural," huh?”

The trouble is that no online dictionary meets the rigorous requirements of secular science. Thus, “miracle” (to be an object of inquiry worthy of scientific investigation) must meet more rigorous criteria. From the Oxford Dictionary of Science we have:

“The claimed apperception of an anomalous event that violates one of the laws of physics, biology or chemistry such that the happenstance is of supra-physical parameters and can’t be analyzed quantitatively within ordinary physical parameters or using normative physical criteria.”

Note that the term “supra-physical” is employed, not supernatural.

The problem with use of the term “supernatural” is that most who employ it don’t do it properly. For example, Pascal Boyer in his (Ch. 2), ‘What Supernatural Concepts are like’, p. 51, in his book Religion Explained: The Evolutionary Origins of Religious Thought, Basic Books)shows what is required to have a supernatural concept or to claim such exists (e.g. to even formulate a premise):

“The information contained in key tags of the statement or concept must contradict information provided by the ontological category”.

But at no time have religious folks- who insist a “supernatural” exists- met these conditions even remotely! In most cases they give maybe only one key “tag” but even there the information is severely limited. In no uses of the term supernatural have I ever seen the tags contradict the information of the ontological category.

For example, if the ontological category is “invisible” how or where do key tags exist in any of the claims that contradict its information? This criterion is never ever met.

But in truth, I would actually have been seriously remiss by accepting that “secular definition” (what I actually call a pseudo-secular definition) for the reasons given above. Again, I don’t deny the possibility of reports of events that – on initial apperception- seem to violate physical laws. I only say that they must be rigorously investigated to conclude the apperceptions of alleged events are in fact, real in space and time and not merely ideations of the brain.

This is crucial because the experiments of J.M. Persinger suggest that most of the claimed “supernatural” events religious folk perceive arise from micro-seizures (called TLTs, or temporal lobe transients) in the temporal lobes, and manifestations are therefore akin to those of a mental disease, including hallucinations. Persinger proceeded by electrically stimulating the temporal lobes of numerous subjects with specially designed helmets. In each case, religious visions, “miracles”, or "insights" emerged, as well as beliefs. Eventually, Persinger had to call it quits after receiving death threats.

The point is, without rigorous test, one will not discriminate an actual physical law violating event from a brain-confected one. Thus, it is quite infeasible to accept a “biblical definition of miracle” because that is already tainted by prejudice (bias) and selection effects, including that the authors may have deliberately inserted “miracles” in order to bolster their Messiah claims for J.C. Geza Vermes actually cites numerous instances of this “artistic license” in his book, The Authentic Gospel of Jesus.