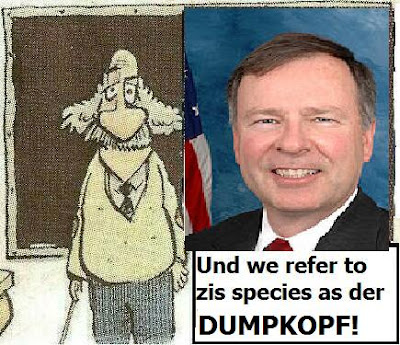 Over the past five years I’ve sent at least three letters to my Representative Doug Lamborn, two to do with Social security and one on U.S. energy policy. In none of those cases did I receive anything other than the usual conservative codswallop, i.e. “congress needs to rein in the red ink and set difficult priorities” and “by 2015 the program (S.S.) is expected to pay out more than it takes in” etc. In other words, the usual bunkum, obviously to justify either cutting back benefits, or worse, privatizing it. As for an alternative energy policy, Lamborn has none.

This is referenced in order to show that Lamborn's most recent moves are therefore not surprising at all. As noted in yesterday's Editorial in The Denver Post, Lamborn has his sights set on "eliminating funding for the National Renewable Energy Laboratory in Golden, CO" which they rightfully added is an ill-conceived notion that would decimate the nation's premiere renewable energ research facility. Never mind that the NREL provides the best hope for an energy future which will not much longer sustain the consumption of 1,000 barrels of oil per second.

Never mind also that the laboratory has an annual budget of about $350 million, and "has made significant contributions to the development of renewable energy technologies"(ibid.) Never mind also that 2,300 dedicated workers will find themselves out on the streets. But does Lamborn or his clique of conservo cutters care? Hell no!

The worst travesty in all this? NREL has incepted private ventures, including venture capital, for new private businesse to seed more job growth in the state. For example, recent advances have enabled the discovery of a particularly thin and efficient solar film developed at NREL. This was subsequently spun off into a small Arvada company called PrimeStar Solar.

Meanwhile, in April, General Electric announced it would acquire PrimeStar and mass produce its panels at a new manufacturing plant. In a news release, GE said the solar facility will be larger than any U.S. solar panel manufacturing plant currently in operation and will employ 400 people. That will be in addition to the 2,300 already at NREL.

What is Lamborn's problem? Bear in mind even as he calls for cuts in the NREL he is humping and pumping for a new "combat air brigade" (CAB) to be brought into his home district of El Paso County, at a cost of nearly $1 billion ($750 million for construction costs, contracts and $250 million for the 100-odd helicopters to base there- putatively for assisting in Afghanistan, though the Army's own internal report published in 2007 claimed they'd be of little use there. (See my previous blogs on this fiasco project).

The odd thing is this CAB won't be up and ready before 2013 while Obama plans all troops to be pulled out of Afghanistan by 2014 (as well they should, since we simply can't afford to sustain that occupation any longer, nor should we be in the business of costly nation building!) Thus, the CAB will be of almost no use at all for the claimed purposes, and will also add more than 2,400 troops and dependents to an area whose services and budgets have already been pared to the bone, and also top heavy on military pork. But that is the key reason for it: military pork to keep Lamborn's conservo constituents happy as pigs in slop. Feeding on the federal trough even as others do without.

Meanwhile, even as Lamborn's pet military chopper project will only churn out millions of barrels of burnt fossil fuels each year, plus endless 'thwop-thwop' noise and vexation, the NREL has actually developed a high-efficiency windmill blade that has been adopted by industry. In other words, Lamborn's pet pork project stands to consume more valuable energy while NREL stands to lower our overall costs and consumption.

Sadly, there are even idiots that defend this dolt's anti-ambitions, as in today's Letters section of the Post. According to Terry W. Donze:

Kudos to Rep. Doug Lamborn for his courage in standing up to the environmental and government employee lobbies by calling for cuts in government financing of science. Much as I like the people at NREL, they should all be doing their research for private entities, and would probably be getting paid more to do so.

As anyone in research knows, 90-plus percent of what researchers do leads to dead ends. Why should I and the rest of the citizenry have to pay for something that will end in failure nine times out of 10?

The people working at NREL will gain nothing for their efforts, as any monetary benefit of discovering something useful that may actually help society will go to government coffers, not their own.

Lamborn should have gone one further and called for closing of the entire Department of Energy, which would save us billions..

This moron and neo-Luddite applauds cutting government funding for science, but sees no problem for government's exhorbitant funding of pie-eyed military B.S. like Lamborn's white elephant CAB for Fort Carson, or manufacturing the problem-riddled F-35. Those are hunkey dorey, A-ok. Despite the fact that military -related waste spending has already consumed more than $3 trillion, for two useless occupations which will gain us nothing but more losses in blood and treasure, not to mention the immense medical treatment costs of returning vets far into the future. By contrast, the DOE budget is nearly 10,000 time LESS! However, the cost -benefit tradeoff is more than 10,000 times better than any military project or boondoggle - all of which are hostage to ever spiraling higher costs from defense contractor parasites.

As the Denver Post editorial also notes (ibid.): Furthermore, NREL is an economic engine for Colorado. As of August 2010, the federal laboratory had 329 contracts totaling $414 million with Colorado companies, according to a study by the University of Colorado's Leeds School of Business.

Note that this is an engine for PRIVATE venture capital and jobs, NOT federal pork which milks all taxpayers to subsidize a few communities, like Colorado Springs, at the expense of many others.

The other imbecilic comment made by letter-writer Donze is that "90-plus percent of what researchers do leads to dead ends. Why should I and the rest of the citizenry have to pay for something that will end in failure nine times out of 10?"

Well, Einstein, because it is in those 1 of 10 instances that the payoff arrives! Remove basic research and we'd never have benefited from an array of inventions and devices, such as tunnel diodes (the basis of most modern solid state electronics) or from radiation therapy (one of the primary modes of cancer treatment), far less preventive medical applications such as MRIs, EEGs, and so on. Jet engines were also the product of basic research, though mayhap clone dolts like Donze might prefer to bicycle wherever they go, or maybe hitch hike on yachts or ships to get across the seas!

But as my wife observed this morning on reading Donze's balderdash: "What a purblind a-hole! Can't he see that this is tunnel vision?"

Well, no he can't! Neither can Lamborn or most of the right wing morons who actually believe global warming is a "hoax" and want to pull the EPA's funding too! This is the sort of menial intellect we must now deal with, and hope that our governance doesn't devolve further after next November's elections!
Posted by Copernicus at 1:32 PM