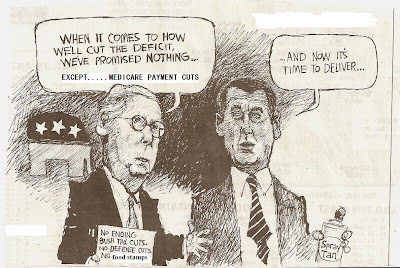 "Let me be clear! Tax hikes are OFF the table!"

So said House Speaker John Boehner on Thursday, confirming again the GOP's bargaining position from bad faith in terms of raising the nation's debt ceiling, since they are prepared to reject ab initio the ONE solution that would most easily and rapidly solve our problems! This shows the GOP, aka repukes, are not serious about deficit control, but only wish to exploit it as a means of extortion on the Democrats to cut long-term social programs. (Ironically, at the same time, the GOP refuses to entertain any significant military spending cuts!)

This brash posturing comes on the heels of a non-partisan Congressional Budget Office (CBO) report on Wednesday, outlining a projected "explosion" in government spending. The CBO names Social Security and Medicare, but let's be frank about what's really going on here. We need the perceptions of deep politics for this, not superficial or pundit-cheap politics such as on the tube.

The population has more than tripled in the U.S. since FDR initiated the Social Security program, and more than doubled since LBJ initiated Medicare (in 1966) and so basic arithmetic stands at the foundation of most the increase. In addition, it was a Republican president, Richard M. Nixon, who approved the go ahead for cost of living (COLA) increases in Social Security, realizing if this wasn't done, then rising medical expenses and fees from Medicare would soon swallow ALL of a retiree's money.

The real basis then for the "explosion" of government costs is NOT Social Security and Medicare per se, but the unwillingness to fund them! (While simultaneously raiding Social Security monies to pay for military adventures and pork to hide the size of deficits!)

The Republicans have known all along that if enough tax cuts and expensive military interventions, occupations could be mounted, the government would eventually spend down its assets and reach the point where the social programs would be in jeopardy- unless drastically pared back. The GOP and anti-tax terrorist Grover Norquist (who designed an insane "pledge" against raising taxes that all new Goop-ers must sign) have succeeded in achieving this condition by:

- ten years of military occupations at a total cost now of nearly $3.4 trillion

- ten years of Bush tax cuts at a cost of over $3.1 trillion (including the last extension in December), and

- increasing the defense budget to 3.9% of GDP in 2004 (which former defense analyist Chuck Spinney called "the start of a war on Social Security and Medicare")

Thus, the "ballooning costs" of Social Security and Medicare as reported by the CBO have only been because the Repukes have refused to allow the tax revenue which is needed to pay for them - including for their own Republican constituents known as "values voters" (especially in the Deep South). They have even disallowed raising the payroll cap to $1m, requiring more rich folks to pay in, which would immediately make Social Security viable for another 75 years. But they know if they did that, the current Generation X and Y'ers would also be assured of receiving their benefits so might well become long time program defenders - by becoming Dem voters!

Meanwhile, in a separate pragraph, the CBO validated this by noting that these current and future expenditures could be kept pace with provided the Bush tax cuts be allowed to expire next year and allow the AMT (alternative minimum tax) to hit higher income families. If not, according to the CBO, "under current tax policies, revenue will barely cover the cost of the health and retirement programs alone by 2035."

But again, this is what the GOP wants! They want to put the Democratic Party under severe political pressure,in any ways they can. Just as they're now doing it behind the scenes in many Repug-held states (by governorship) thus requiring strict photo IDs for any future voters (i.e. next year), which they know many of the elderly, African-American and young will never be able to meet.

Here's the dirty filthy truth these anti-tax miscreants don't want people to know: current tax rates as a percentage of GDP are the LOWEST they've been in nearly 40 years! The other dirty secret is that even without the military adventures and "wars" of choice, the Bush tax cuts themselves would've bled us into massive debt. The extended occupations, being unpaid for by higher taxes, just exacerbated the horrific debt ratio much more! The CBO in its report states if current tax rejection policies remain unchanged (and the national debt continues to grow as a result) then U.S. economic output could be as much as 6% smaller than current projections by 2018 and 18% by 2035.

This again, isn't startling or amazing! As early as 1995, economists James Medoff and Andrew Harless, in the The Indebted Society (p. 84, 'Let Them Eat Cake'), found that that "high tax rates are associated with higher productivity growth". There is a consistent and strong relationship. By contrast, for the years when supply side dogma held (during the Reagan and Bush Sr. years), productivity retreated by more than 30% and debt exploded- exactly the opposite of what we've been sold. As they wrote:

"For the health of the economy, Reagan's policies turned out to be just about the worst thing that could have happened: investment did not increase, growth continued to stagnate, and the federal deficit ballooned to new dimensions.

This was validated (for the Bush tax cuts, or as we call them, "Reagan Supply side II") by a Financial Times detailed analysis of the Bush Tax cuts in its Sept. 15, 2010 issue (page 24), wherein it was observed:


"“The 2000s- that is the period immediately following the Bush tax cuts – were the weakest decade in U.S. postwar history for real, non-residential capital investment. Not only were the 2000s by far the weakest period but the tax cuts did not even curtail the secular slowdown in the growth of business structures. Rather the slowdown accelerated to a full decline”

Contrast this with the hike in taxes (to only 39.5%) immediately after Bill Clinton took office, leading to the accumulation of more than $600 billion in surpluses by the time he left in 2000, and the creation of 20 million jobs.

Meanwhile, the FT analysis observes that “during each decade from the 1950s to the 1990s, growth in real gross non-residential investment averaged between 3.5 percent and 7.4 percent a decade. During the 2000s it averaged a mere 1%”

It is evident to anyone but a certified idiot, that higher taxes are the path out of our financial morass. On the other hand, the continued stubbonr refusal to raise taxes is the path to national fiscal suicide and the U.S. rapidly becoming a very large third world country - with a few elites at the top, but the mass of people groveling.

THIS is why the GOP anti-tax position is not only dishonest and despicable, but fiscally traitorous as well. The Dems, for their part, must not yield to this extortion - no matter what threats the Repukes make! Or how many times Eric Kantor pitches a tantrum or Boner weeps his eyes out!
Posted by Copernicus at 3:53 PM