Money Mistakes? They BEGIN with the Stock Market! 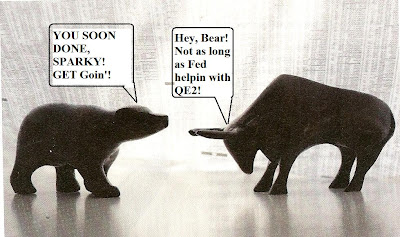 MONEY magazine is a very interesting and intriguing journal. On the one hand they proffer much useful advice, such as in their June, 2011 issue, on how to deal with an elder parent's finances and problems arising therefrom. Basically good practical advice (except the part about "helping them with mutual funds" - where I don't think any 80-year old should be in mutuals, period!) But they also feature some articles for which one can express skepticism such as 'Stay Cool When News Gets Scary' (p. 35, op. cit.) and 'Fix Your 5 Biggest Money Mistakes' (p. 56)

In the first piece, by Paul J. Lim, people are warned against "over reacting" to bad news and selling prematurely. As he says: "For every unexpected crisis, count on some to over react". Maybe, but maybe they are just practicing some inbred wisdom and caution that might save them having to work into their 80s! He also has an inset feature (p. 57) that 'Markets Absorb Shocks' - giving examples after major environmental catastrophes, earthquakes and hurricanes. But this is no big deal, since what people- investors (mostly small time) are really worried about is the long term returns of stock market investment.

The fact is, ever since 2000, the stock market and specifically the S&P 500 returns have remained essentially static, or barely keeping up with CDs and money markets. Worse, people that have been invested in stocks (including indirectly via mutual funds) have been the biggest losers when the markets did tank, as in October, 2008. Many of these folks are still trying to recover the 40% or more lost in their 401ks.

Thus, while Lim focuses on transitory episodes - which I agree markets can "absorb" to an extent, he makes light of the essential structural deficiencies of today's stock market which include: manipulation by large institutional investors, market timing by assorted funds, managers, flash trading using high speed algorithms that can sell and buy back millions of shares before a small fry investor can dial his phone. All of these are at work, but none of the stock or mutuals panderers ever mention them.

Less mentioned or noted is the fact that the laws of probability make it unlikely that continuous gains would be reaped over 45 straight years. More likely significant downturns will intrude - and each time they'll wreck the accumulation of principal. (Especially as the shysters on the Street meddle in accounts, as do Mutual fund companies - what with high expense ratios etc.) If this occurs a year or two before retirement, it can essentially scuttle those plans. For example, some retirement calculators (e.g. T. Rowe Price) disclose that a person who retired at the height of the Bull ca. 1999, would have his or her money last eighteen years longer than a person retiring in 2003. Assuming the same size portfolios and other factors. This is serious stuff, but seldom do the money-investing mags broach it.

A Stanford University study- based on the median return of 62 mutual funds- showed that $1 invested in 1962 would have grown to $21.89 by 1992, on a pre-tax basis. The study disclosed that the $1 would have grown to only $9.87 on an after-tax basis. And the investor would have had to come up with $12.02 to pay the taxes. By contrast the same study showed that a “conservative” investor who put assets into a U.S. Savings Bond in 1962, turned each $1 into $10.93 by 1992. It is easy to work out from these numbers which investor actually fared better over the thirty-year interval according to the study. Hint- hint: it wasn't the sucker in stocks.

Unless mutuals investors do the math and watch the numbers they cannot be aware of how little they're actually taking home. It is also well for small investors to understand that, to a large degree, they are in a game with a 'stacked deck'. Not only that, but under current laws their investments are almost entirely blind. Like buying a pig in a poke. This point was emphasized in a London Financial Times article (‘A Metaphorical Proposal’, Mar. 13, 2004, p. 11A) by Michael Skapinker. He cited remarks by Joseph Berardino – chief exec of Arthur Andersen- who noted how the current reporting system “fails to communicate essential information about the real risks facing companies” to the small investor. Thus, EVERY small fry remains at a distinct disadvantage particularly since the rules for reporting haven't changed.

Skapinker quotes Berardino as noting how accountants can only issue ‘pass’ or ‘fail’ judgments on companies but can't disclose the actual red ink being bled by a company that’s been passed. (What's referred to as a “bleeding edge” company wherein auditors are actually resigning). As the author notes, to do so would precipitate a collapse in share prices. Under such conditions, the small investor risks his money and security, by investing in ANY non-FDIC insured monetary device.

This brings up the 'Money Mistakes' (by Carla Fried) in the same issue, chief among which is 'Thinking Risk is Enemy No. 1' (p. 62). Fried cited a recent MFS Investment Report survey showing that "barely a third of investors consider stocks a good investment these days". But why should that be surprising? As I noted in many earlier blogs, the small investor is quite correct to take such a dim view. The fact is this current market has been built on quicksand since the financial collapse of 2008. There are still 13 plus million unemployed, half long term (over 6 months) and another 5-6 million dropped totally off the unemployment rolls since they're deemed no longer looking for work. Hence, no longer unemployed but 'discouraged'. (This is almost as goofy as the fundies who assert there are no real contradictions in their bibles only 'problems'. Yeah, right!)

The point is that none of those 20 -odd million can spend and prop up the consumer economy. Hence, any company that provides services or products that show growth in excess of 3% or so, e.g. reflected in more than 3% returns, can't be on the up and up and must be playing the numbers (e.g. buying back their own shares to jack up their value). One way this has been done is via the Federal Reserve's 'quantitative easing 2' (or QE2) which has enormously helped to prop up stocks that otherwise would've collapsed by now. QE2 like QE1 has at the same time made loads of cheap money available for parasites to latch onto, while it has driven yields on bonds and fixed income investments so low (including by keeping interest rates near zero) that it's literally driven desperate people into the maw of Maul Street.

Of course, Fried trots out the usual codswallop, i.e. that "over the past 50 years inflation has averaged 4.1% and during that time large cap stocks returned an annualized 9.8%" This false statistic, since it isn't useful at all to anyone with a short time horizon or living in an aberrant financial environment (as we are now) is seen by these stock peddlers as some kind of balm. What honest writers need to do is direct people (including their friendly "green eyeshade" advisors) to one of the most enlightening articles that ever appeared in The Wall Street Journal, on Nov. 27, 2003, page D1, 'A Harsh Truth: Most of Your Investments Won't Make Money- Even in the Long Term. The piece basically blows to kingdom come the standard nonsense Fried tries to run by snoozing MONEY readers, and shows more realistically that most folks (certainly small fry) get returns only barely near high end CDs (3-4%) after paying taxes, fees, etc.

Thus, Fried's citation of Charles Schwab's Colleen O'Brien (ibid.)that "investors are stuck on protection of principal when they should be focused on what their principal can do for them", doesn't hold water. Indeed, it is more a case of those like O'Brien braying in tunes of sour grapes that they aren't getting the usual easy money from "dumb order flow" (the Street's term for small fry investors) like they used to. She talks about "your principal supporting your golf games" but who the hell needs golf? The most environmentally wasteful, dippy-doo "game" ever invented, just so a bunch of pot-bellied pols, rich parasites, has -beens and hacks can get 2 ergs of "exercise" by ambling on a green. (Hell, most won't even do that, using carts instead!)

The last element of nonsense is that a "comfortable retirement" depends on one being in stocks, or mutuals. And this is total, absolute bollocks. The usual reason cited by the finance flacks is that if one isn't in stocks, then that horrific, evil bogeyman called inflation, will eat up one's principal anyway. In fact, let's look at it logically: the average American male who hits 65 this year can expect to live only another 13 years. Oh sure, the financial hacks cite living to 90 or so, but dream on! Less than 1 in 10,000 American males will achieve that milestone and those that do will likely be in an Alzheimer's condition so it won't matter what goes on around them anyway.

There are also a gazillion ways to beat inflation, including with prescription drugs, and utilities etc. Those interested should consult Vicki Robbins and Joe Domniguez excellent book on simplicity, Your Money or Your Life.

Remember that the siren calls of the financial hacks and flacks are mainly because they want your money: easy money! They want you to also forget the havoc in the recent 2008 market collapse, how much was lost in toto($6.8 TRILLION)and to just buy into a new "Bull", which economist G.P. Brockway has noted has been the usual vehicle to part common folks from their money. It's been ever thus, since the "investment trusts" of the 1920s. Pay no attention to them, but do save and invest only in vehicles you fully understand and which won't turn you into "dumb order flow" or "chickens to be plucked" (to use another turn of phrase popular amongst the Street's movers and shakers!)
Posted by Copernicus at 8:43 AM