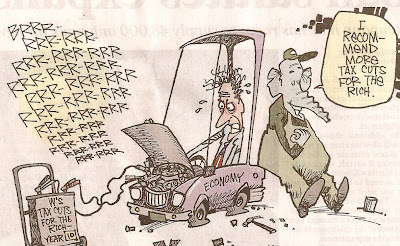 I was finally elated to see some fire in the belly of Mr. Obama at his press conference. His eyes flared, and he aimed emotional daggers at the obstructing repukes - who remain foursquare against raising any revenues as part of deficit reduction. But as I've repeatedly shown, any sane person or group would know we can't get to $2.4 trillion in deficit reduction by cutting spending alone! As one British economist noted, quoted in The Economist: "Saying you can improve the economy by just cutting taxes is like saying you can run faster by cutting off a foot!"

So true! But why don't the Republicans get it, and cooperate for a true, beneficial deal for this country? Well, because they've all signed "pledges" (compliments of Grover Norquist) not to. If any ONE of them breaks from the pack, there'll be hell to pay and not only will Norquist go ballistic, but all the other Rs will lose it as well - probably even more than my bro over me denying him his "loan" some days ago. (At least in his mind, I actually didn't!)

This obstinacy and perverse obstructionism, refusal to genuinely cooperate, puts the Dems and Mr. Obama in a hellacious bind. As calamitous as a default would likely be, giving in to crazed, spending cut frenzied repukes would be much worse. Bank on it! If the Ds cave on this extortion, and give in to allow ALL spending cuts with few or no tax hikes, then as I showed a few blogs ago it will mean the implosion of the economy (due to 40-50% reduction in aggregate demand) and plausibly 18% unemployment by next summer. This will be an unmitigated catastrophe for the Democrats and Mr. Obama - especially with the general election only months away - but the Republicans will be in 7th heaven. They will have effectively gotten the Dems and the President to cooperate in the destruction of the economy to advance the Repukes' own partisan political agenda. It means that what transpired in November last year, that election debacle, will be like a 'tea party' compared to what will occur next November!

In effect, what this means is that Mr. Obama (like Mr. Clinton also facing the repukes over a gov't shutdown 16 years ago) must choose the lesser of two evils. As incredible (or appalling) as it may sound, this means he must not merely use rhetoric - even charged rhetoric - but be fully prepared to take the Repukes to the wire, and - if it means allowing a default- then he must do it! He cannot allow himself to submit - or the nation to submit- to this vicious blackmail by the rethugs, to this fiscal "gun" to the nation's head. (To use blogger Andrew Sullivan's turn of phrase).

The polling figures are on Mr. Obama's side, as only 8% believe he's responsible for the debt impasse and problems. What people are thus looking for, is bold and unintimidated leadership such as Bill Clinton displayed when he stood up to similar Repug extortion threats (from Gingrich & Co.) on his watch. Then the government actually did shut down, at least temporarily. Clinton never blinked, Gingrich and the repukes did. The same must play out this time, no exceptions. Under NO circumstances must Obama blink, or he will look like a rook, a newbe, a callow former state Senator ...and an easy mark for all further dealings (including the extension of the horrific Bush tax cuts in 2012, an election year!)

The bottom line: Obama cannot and must not go along with the Republicans in their insane, economy-destroyng spending cut orgy! Any give-in here can only be a Pyrrhic victory, at unaceptable cost and far worse than any bond pirates might threaten! If it means default, so be it. We must also stop hearing ANYTHING, any mild words from the Ds circulating in the media, to the effect that even smacks of Repuglican-memes and narratives. Thus, Max Baucus must be made to shut up about "Medicare cuts" (which plays into the Repuke dynamic) just as Joe Lieberman in his courting of Tom Coburn to try and elicit $600b in such cuts. Obama needs to repeatedly remind these cheese eaters that his own Affordable Health Plan incorporates $500b in Medicare cuts and so this is already the solution.

Meanwhile, Mr. Obama himself must cease his own tax cut pandering, especially after last December's extension of the Bush tax cuts. That means ceasing forthwith any more talk of another year of "payroll tax cuts". No, no, no and NO! As an article in MONEY magazine noted, the benefits from the existing payroll tax freeze have only been marginal and consumers continue to be defensive in their spending. One year of such a freeze was bad enough as it denied badly needed money to support Social Security and Medicare. TWO years would be a freaking catastrophe and play right into Repuke memes that both are approaching insolvency and lacking money! By adding an additional year of payroll tax freezing, Mr. Obama would abet this, so even if he wants it congress must turn it down. (At least the still D-held Senate).

We will wait to see what occurs, but I want to see not just strong rhetoric but action driven by spine...plain old-fashioned intestinal fortitude as opposed to another capitulation. That means taking the Republicans to the cliff and beyond, if need be, in order not to destroy this nation's economy! As I said...the lesser of two evils.
Posted by Copernicus at 10:13 AM