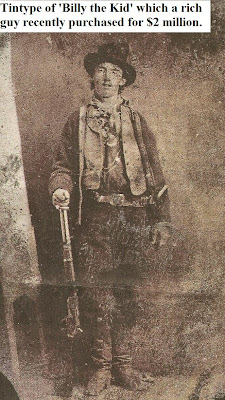 William Bonner, aka "Billy the Kid", was a loathsome scumball, one of the worst vermin to inhabit the West. Before he was gunned down (by Pat Garrett) he had one of several last photos taken about 130 years ago in which is called "tintype" today. The photos, slightly larger than modern baseball cards, should all have found their way into sewers or dumpsters by now, but one actually made its way to a Denver Auction.

There it was purchased....get this... for TWO MILLION DOLLARS! This sent waves of absolute revulsion through me, when I considered what that sum of money could otherwise have accomplished...how much good it could have done... as opposed to pissing it away for the 130-year old image of a rat. For example:

- Purchased six months worth of nutritious meals for 100 homeless kids.

- Enabled construction of a 40-room shelter for homeless families.


But what was the money used for? To purchase a little tintype photo of one of the worst villains of the Old West!

Later word has it that the purchaser was one of the billionaire Koch brothers. The same Koch brothers who use their other extra, excess monies to fund the Tea Party's exploits. (Though most Tea Baggers don't have clue one who's behind their agenda!)

It is now time, given that they have so much EXTRA, unneeded money to piss away, to tax the bastards to the hilt! That's why I now propose increasing the marginal tax rate at the top to what it was during the Eisenhower years: 91%. Also, bring back the estate taxes and put all kinds of provisos on them (i.e. no gifting beforehand to family members, trusts etc.) to ensure all gets paid to Uncle Sam.

Anytime a rich guy can just piss so much way discloses he has excess money, in fact more than he reasonable knows what to do with....or NEEDS. I make the same claim for the Koch bro that purchased the Billy the Kid photo, as I do for the other rich dude that paid $6 million (at an auction sponsored by Debbie Reynolds) for the dress Marilyn Monroe wore (when the subway draft blew it up around her waist) in 'Seven Year Itch' (1955) and the other character that tossed out $1.8 million for Michael Jackson's favorite jacket.

All this money wastage shows the rich have way too much...as well as time on their hands.

Of course, with the repukes in power, and now yammering incessantly to give the richest even BIGGER tax cuts (while they take Medicare from poor seniors and replace it with useless vouchers), we will have to expect even more obscene purchases that will only make normal humans wince at the chutzpah, arrogance and depraved flaunting. This is the Republicans' plan: to give each rich millionaire another Lexus each year in tax cut equivalents, and each billionaire enough to purchase a new Lear jet.....or maybe....the last photo ever taken of Adolf Hitler before heading into his Berlin bunker as the Russians approached.

I am sure the next billionaire who buys that will have much to share in common with the subject!
Posted by Copernicus at 9:30 AM