Question: What is the mass-luminosity relation and how is it used in astronomy?

Answer:  The Mass-Luminosity relation is a quantitative equation, e.g.

where L, M refer to solar luminosity and mass  values and L', M' to stellar values.  The equation  enables us to infer the actual brightness of a main sequence star based on its mass, and also to compare stellar luminosities (intrinsic brightnesses) and deduce other stellar properties  such as mass and radius.  I will provide a number of examples to show how this can be done. 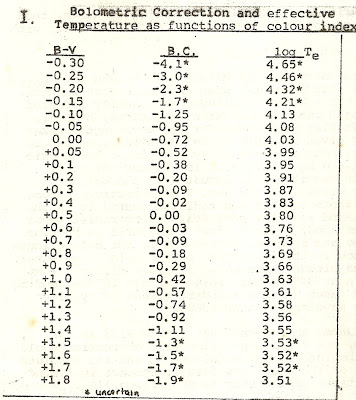 Note the difference (B - V) is the "color index" representing the difference in magnitudes m_B and m_V, e.g. (m_B - m_B) where m_B is the apparent magnitude from a bule filter and m_V is the apparent visual magnitude from the  standard yellow or visual filter - most sensitive to wavelengths near 550 nm. (Nanometers)Now, if the absolute bolometric magnitude (M_bol) of a star is known, then its luminosity can be found as a function of the Sun's luminosity with the relation:Log (L'/L) = 0.4 (M_bol - M_bol*)

So Almach has over 1400 times the intrinsic brightness of our Sun.

To get the hang of it here are two problems to work on your own, following the examples I've given:

The Trumpie Base - Collateral Damage In Trump's Trade War With China

Coded map (cf. WSJ yesterday, p. A1) shows the Trumpie base has been hit hardest by the blowback from Trump's tariffs.

While the front page article in yesterday's Wall Street Journal focused on the emergence of a new "cold war'  between the U.S. and China, the less prominent story was how the Trump base has become collateral damage in the ongoing trade war.  According to the piece, by Bob Davis and Lingling Wei:

"China and the U.S. are on the brink of a new Cold War, with tensions over trade at the top of the agenda. Both are erecting increasingly punitive tariff barriers on either side of the Pacific, putting into play their reputations on the world stage and the fate of major industries from cars to cellphones."

Before moving on let's please be clear Dotard Donny started this trade fracas and also escalated it.   Thus, coming off Air Force One in Fargo, ND on Sept. 7, the Orange Baboon barked, in respect of his tariffs on the Chinese, warning:

"There's another $267 billion ready to go on short notice, if I want!"

"This places the burden on American families, manufacturers and farmers, who will pay the higher tariffs and bear the brunt of retaliation."

The news at the time was that Trump planned to impose $200 b more on Chinese goods starting the following week.  The new round of tariffs would start at 10 percent then rise to 25 percent on January 1st.   No harm, no foul? Hardly! The scheme will further economically pulverize his sorry base - who tried for an existential cry - but will end up in an existential mess.

All of which brings to mind the  infamous Smoot-Hawley tariffs, as described below in an article at Britannica.com:

"What exactly was Smoot-Hawley? Its stated purpose sounds eerily similar to the goals that Trump has espoused. It was, said its title, “an Act to provide revenue, to regulate commerce with foreign countries, to encourage the industries of the United States, to protect American labor, and for other purposes…”

But in the end, the act of so-called "protection" ended up roasting most American workers even more badly in the Great Depression. Do people ever learn from history? Not Donald Trump. As William Galston wrote in an Aug. 8, WSJ op -ed:

Never mind that, according to yesterday's WSJ piece,  while China has been "unable to match" the size of the Trump tariffs ($130b   vs. $200b), it has still exacted a cost - mainly on the twits that voted for The Dotard.  Mapping the counties that voted for Trump in 2016 and those affected by China’s tariffs,  shows the extent to which Trump voters’ jobs rely on the products being targeted. Beijing hopes it can convince those voters — and their elected representatives — that Dotard Donny's trade war could hurt them. A look at the WSJ map shows clearly it has.

Look carefully at the scarlet -coded areas on the map.  These show the regions hurt most by the Chinese punch back tariffs (i.e. in response to the Trump initial tariffs on Chinese imports).  They also disclose the regions of highest Trump support. The green areas by contrast show the areas of least Trump support - which also reaped the most benefits, i.e. in terms of % of GDP exposed to benefits, minus the share at risk of harm. Start with the fact China used to buy a quarter of American soybeans but has now pulled back - leaving most soybean farmers (mainly in the midwest) without a crop to sell, and hence taking huge losses.

Meanwhile, local papers across "flyover" nation are replete with tales of woe regarding value destruction, foreclosed homes and farms and lost income from Trump's trade wars.  We can debate from now until doomsday the definition of "trade war" but the fact is that Trump's tariffs are already costing millions,  millions.

To fix ideas, think of the workers assembling Harleys on the shop floor and the truck drivers hauling hogs to port. The geography of the retaliation — two rounds from China and one each from Mexico, the European Union and Canada — reveals the common calculations.  Think also of the recent GM release of thousands of auto plant workers in five locations.  Much is being made of the redesign of GM cars to fit a new market, but less is said concerning the effect of the Trump tariffs on steel - which have cost GM auto makers an estimated $1 trillion.  Yes, GM likely would close those plants anyway, but the Trump tariffs sped the process - and hit auto workers right before Christmas.  They barely had any time to plan or think of even moving to new locations.

Tariffs are, in the first instance, a dumb round fired into the nation's foot. They raise the cost of imports, hurting domestic consumers as well as companies that import intermediate goods — from steel to integrated circuits — that go into their finished products. The Trump bunch, including Wilbur Ross- and the Dotard himself - also don't grasp that trade itself is not purely transactional in the Trump real estate grifter sense of being a zero sum game. Trump barked at one point during the summer, highlighting his ignorance:
"Why should I allow countries to make massive trade surpluses as they have for decades?"

Well, dummy, because those  trade surpluses mean more Americans are able to buy those goods because they are cheaper!  More cheap goods =  more items bought, i.e. from the Chinese, so the Chinese run up a trade surplus.   Trump, senseless buffoon that he is, can't seem to appreciate that lower income Americans (i.e. the Trump base) benefit from competitively priced Chinese electronics, or Mexican produce, Japanese cars and Canadian steel. What does Trump want, his voters reduced to having to pay 50- 100 percent more for everything when his tariffs are already eating away at his tax cut benefits?  (One WSJ Editorial has estimated that those in the lowest income quintile "could lose 49 percent of their tax cut gains")

So who is Trump fooling? Well, his own base for sure if they fail to see through what he's doing. Brookings Institution  researchers have estimated that 13 percent of export-dependent jobs in rural America were affected by the tariffs, in that they depend either directly or indirectly on products hit by tariffs. Big, diverse cities (like LA)  with large service economies are somewhat more insulated. In large metropolitan areas, only 3.5 percent of export-dependent jobs are exposed.
So who do you think is getting clobbered the most?

The other aspect is that Trump and most Trumpkins fail to process that trade deficits are neither good or bad. Indeed, the WSJ's Greg Ip  answered the question of why the US. itself runs a trade deficit. e.g. U.S. Trade Gap Widened in June - WSJ   :

Hence,  the only way to counter that is for Americans to invest less, and save more.  If then average people-  even Trumpies - saved more, they'd be able to afford higher end U.S. goods if they wanted them, as opposed to buying cheaper Chinese, or Japanese electronics or cars.  Buying more  high priced (and probably better quality) U.S. products would narrow the trade gap.

Basically then tariffs don't solve any trade or economic imbalance problems other than in the short term.   They're basically a cudgel to whack at the symptoms of an economic dysfunction, not the cause.  Trump and his lackeys may brag about the steel jobs being "saved"  thanks to his 25 % tariffs on foreign steel imports, but left unsaid are the estimated 11,000- 15,000 job losses for the steel users. That is, those who USE steel to manufacture other goods - say like the GM auto makers, and Harley-Davidson motorcycle manufacturers (who've had to move production overseas because of the tariffs).

All of which makes one wonder how long the Trumpies will hang on to their bombastic leader before they figure out he doesn't have their back, never had. Well, maybe the time is already at hand, according to a recent NY Times op-ed ('Trump  Is Beginning To Lose His Grip') by Stanley B. Greenberg .  We learned, for example:

"Interestingly, the white college women who were supposed to be the “fuel for this Democratic wave” played a smaller role in the Democrats’ increased 2018 margin than white working class women, because the former were 15 percent of midterm voters and the latter 25 percent. "  (According to  an election night survey for Women’s Voice Women’s Vote Action Fund and a study of the exit polls conducted for Edison and Catalist.)

"Yes, House Democrats increased their vote margin nationally among white women with at least a four-year degree by 13 points compared with the Clinton-Trump margin in 2016. But Democrats also won 71 percent of millennial women and 54 percent of unmarried white women ."


Most compelling of all is this revelation:


"Working people are not fools, and Mr. Trump promised them a Republican president who would never cut Social Security, Medicare, or Medicaid; who would repeal Obamacare but provide “insurance for everybody”; who would get rid of bad trade deals and “drain the swamp,” ....But his tax reforms were heavily weighted to large corporations and the top 1 percent. So it is no surprise that more than half of white working class men now believe that Mr. Trump is “self-dealing” and corrupt."

At least these white working class men seem to have figured out their misplaced investment in this putz, and one hopes that flyover country's farmers will soon get it as well.   Time will tell, but the omens for the Dotard are not sanguine. If they continue, he will find himself either in the dock in two years, or perhaps given a one way ticket to Monaco with his loser, grifter family - to remain there with other international predators, pariahs and populist pretenders.

Posted by Copernicus at 8:14 AM No comments: