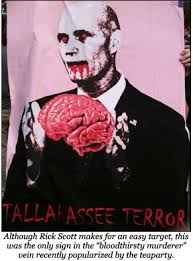 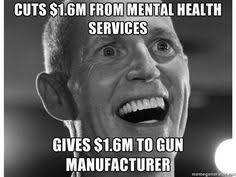 The scenes of Rick Scott - Florida gubernator - going off half cocked and belching he will not allow "liberals to steal votes"-   is choice.  This SOB has been in the habit of sophisticated voter suppression for years in the Sunshine state. Recall, for example, the ungodly lines caused by his deliberate inefficiency and fell plan to limit voting 6 years ago, i.e.

Scene at one of the polling places in , compliments of Gov. Rick Scott who cut early voting days by half. And now this asswipe vermin has the nerve to bitch about liberals stealing votes?

"Scott did not do diddly about extending early voting times, thereby causing unconscionable voting line waits of up to 6 HOURS as reported in The Miami Herald. Now, Scott has forced the hand of the Florida Democratic Party to file a lawsuit early today to force Scott and the state to extend early voting. This followed a stream of complaints from voters (mostly African-American, Hispanic) who reported voting line waits of up to SEVEN hours Saturday. It also followed an ardent request on Thursday  from both the Florida Democratic Party and the League of Women voters to extend early voting hours. But Scott, unreconstructed asshole of the month that he is (maybe asshole of the year) has done neither. As a number of outside observers have put it: "The extraordinarily long lines and extreme delays created have unjustifiably burdened the right to vote"

Let's also be clear Scott is a degenerate scam artist, con man and  criminal. Which too many Florida voters seemed to ignore - or were ignorant about - when they put this turd into office.

To jog memories, his healthcare outfit Columbia HCA was once found guilty of overcharging Medicare over $600m while Scott was CEO. Scott himself admitted "As I have said repeatedly Columbia HA made mistakes, and I take responsibility for what happened on my watch as CEO."  What were those 'mistakes'? The Miami Herald in an expose of Scott's Columbia HCA and the aftermath (June 27, 2010) noted, despite Scott denying that he knew frauds were taking place: "However, federal investigators found that Scott took part in business practices at Columbia/HCA that were later found to be illegal -- specifically, that Scott and other executives offered financial incentives to doctors in exchange for patient referrals, in violation of federal law, according to lawsuits the Justice Department filed against the company in 2001." The doctor payments were among 10 different kinds of fraud identified by the Justice Department in its 10-year probe of the company, records show. Three years after Scott left Columbia HCA, the company admitted wrongdoing, pleading guilty to 14 felonies -- most committed during Scott's tenure -- in addition to paying two sets of fines totaling $1.7 billion..."

This degenerate, (like Calif. Rep Duncan Hunter very soon) ought to have been a jailbird not a sitting governor of a major state.

No one ought to take Scott's barking (or Trump's, obviously) seriously given his background. Every vote, including absentee ballots and provisional ballots, needs to be counted - not dismissed or ignored. Not to do so, to capitulate to a maggot like Rick Scott and his gang of thugs, is to cause citizens to lose confidence in the electoral process. Thereby democracy, and our Republic, is imperiled. Because if citizens are disallowed the fair expression of their ballot, they will resort to other less peaceful means.

Let the vote counting continue in Dade and Broward counties, unlike in 2000 when a Reeptard mob besieged the counting venue, e.g.

Scott then, can shut his mutt mouth, and keep out of the Democratic process, as well as his goon brigade.

Georgia Voter Purge Victim: “This Was a Strategy From Kemp”
Posted by Copernicus at 7:52 AM