The Earth Is Shrinking From Climate Change - But Is Anyone Paying Attention? 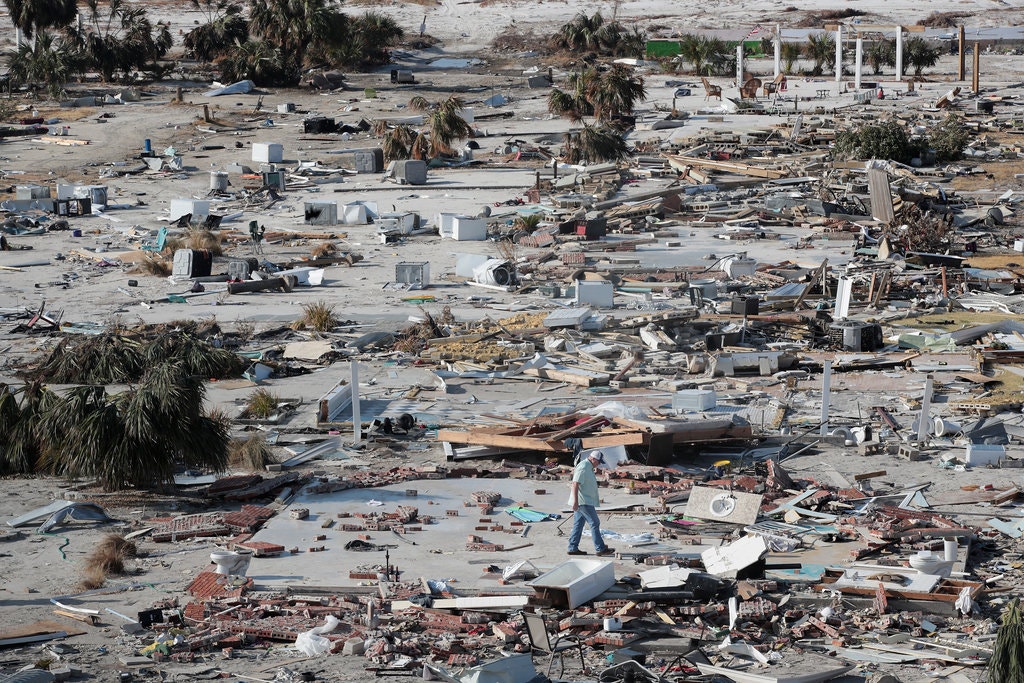 "Already, even in affluent areas, many of us hesitate to walk across a grassy meadow because of he proliferation of ticks bearing Lyme disease - which have come from the hot weather. We have found ourselves unable to swim off beaches because of jellyfish - which thrive in warming seas- have taken over the water. The planet's diameter will remain eight thousand miles and its surface will still cover two hundred million square miles. But the Earth, for humans, has begun to shrink - under our feet and in our minds."  Bill McKibben,  'How Extreme Weather Is Shrinking The Planet',  The New Yorker)

The more intelligent and sensible citizens agree the horrific California wild fires were largely spawned by climate change.   Indeed, the Camp Fire  has become "the deadliest and most destructive fire in the state's history", according to a main section (p. A3)  WSJ piece yesterday.  Most ominously is what it portends for the future given the California wild fire season is typically waning by November. But now, with ever higher yearly temperatures and drier conditions expected, this may be only the beginning- and  there's every chance these monster fires will not be confined to the Golden State.

The spread of such horrific wild fires with tornadic qualities, is also making large areas of land uninhabitable - as the northern California town of Paradise has found. Over the planet this means less habitable land for housing, for water and to grow food crops- not to mention recreational activities.  Point of fact, we've now learned the accessible Earth is shrinking because of the ravages of climate change. (See the quotation at top of post).  What does this mean?  It means that because of the effects of  rampant global warming and expanding human population there is now less of the planet that is livable.

This conclusion is from Bill McKibben, founder of the website 350.Org, in his New Yorker piece, 'How Extreme Weather Is Shrinking The Planet', e.g.

"In 1988, George H. W. Bush, running for President, promised that he would fight “the greenhouse effect with the White House effect.” He did not, nor did his successors, nor did their peers in seats of power around the world, and so in the intervening decades what was a theoretical threat has become a fierce daily reality. As this essay goes to press, California is ablaze. A big fire near Los Angeles forced the evacuation of Malibu, and an even larger fire, in the Sierra Nevada foothills, has become the most destructive in California’s history. After a summer of unprecedented high temperatures and a fall “rainy season” with less than half the usual precipitation, the northern firestorm turned a city called Paradise into an inferno within an hour, razing more than ten thousand buildings and killing at least sixty-three people; more than six hundred others are missing. The authorities brought in cadaver dogs, a lab to match evacuees’ DNA with swabs taken from the dead, and anthropologists from California State University at Chico to advise on how to identify bodies from charred bone fragments."

I also appreciated that McKibben took on the pie -in- the sky optimists - like Steven Pinker  and more recently Matt Ridley (WSJ, 'The Pessimism Reflex', Nov. 17-18, p. C19)- who attempt to convince us that pessimism is merely an aberrant "reflex" -  which is "disproven" when one consults actual statistics - i.e.  telling us everything is "getting better".   (Such as the proportion of people in poverty worldwide, leaving out the fact eight multi-billionaires boast of more wealth than the lowest paid 3.8 BILLION on this planet!)

No things are not getting better,  and this is apart from the fact I agree with Ridley that the news - yes - mostly contains the 'bad' because it is that which grabs attention.  But this doesn't reckon in that if the climate collapses, as we are now witnessing,  so does civilization. Duh!  As McKibben writes:

"For the past few years, a tide of optimistic thinking has held that conditions for human beings around the globe have been improving. Wars are scarcer, poverty and hunger are less severe, and there are better prospects for wide-scale literacy and education. But there are newer signs that human progress has begun to flag. In the face of our environmental deterioration, it’s now reasonable to ask whether the human game has begun to falter—perhaps even to play itself out. Late in 2017, a United Nations agency announced that the number of chronically malnourished people in the world, after a decade of decline, had started to grow again—by thirty-eight million, to a total of eight hundred and fifteen million, “largely due to the proliferation of violent conflicts and climate-related shocks.” In June, 2018, the Food and Agriculture Organization of the U.N. found that child labor, after years of falling, was growing driven in part by an increase in conflicts and climate-related disasters."

And yet we are continually confronted with balderdash such as appeared in the weekend WSJ,  as Ridley writes:  "For us New Optimists, however, it's an uphill battle. No matter how persuasive our evidence we routinely encounter disbelief and even hostility."

As it should be because your "evidence" is nowhere near persuasive, as McKibben clearly shows.

McKibben's take of a shrinking planet  is not exaggeration. McKibben himself points out that the "last thirty years have seen all twenty of the hottest years ever recorded.   Also, "the melting of glaciers and ice caps, and rising sea levels have arrived decades early".   Most mind -blowing, a climate team fro Univ of Illinois reported in May that the UN's "worst case scenario" for global warming effects was "too optimistic".  A point I've made over and over, e.g.

To fix ideas, by the end of this century some parts of the world could face as many as six climate-related crises at the same time, according to a paper published Monday in Nature Climate Change,   The paper shows the effects of climate change across a broad spectrum of problems, including heat waves, wildfires, sea level rise, hurricanes, flooding, drought and shortages of clean water.

Lead  author Camilo Mora of the University of Hawaii at Manoa,  noted that Florida had recently experienced extreme drought, record high temperatures and wildfires — and also Hurricane Michael, the powerful Category 4 storm that slammed into the Panhandle last month. Similarly, California is suffering through the worst wildfires the state has ever seen, as well as drought, extreme heat waves and degraded air quality that threatens the health of residents.

Things will get worse, the authors wrote. The paper projects future trends and suggests that, by 2100, unless humanity takes forceful action to curb the greenhouse gas emissions that drive climate change, some tropical coastal areas of the planet, like the Atlantic coast of South and Central America, could be hit by as many as six crises at a time.

The paper explores the ways that climate change intensifies hazards and describes the interconnected nature of such crises. Greenhouse gas emissions, by warming the atmosphere, can enhance drought in places that are normally dry, “ripening conditions for wildfires and heat waves.". In wetter areas, a warmer atmosphere retains more moisture and strengthens downpours, while higher sea levels increase storm surge and warmer ocean waters can contribute to the overall destructiveness of storms.

In a scientific world marked by specialization and siloed research, this multidisciplinary effort by 23 authors reviewed more than 3,000 papers on various effects of climate change. The authors determined 467 ways in which those changes in climate affect human physical and mental health, food security, water availability, infrastructure and other facets of life on Earth. The paper concludes that traditional research into one element of climate change and its effects can miss the bigger picture of interrelation and risk.


The paper includes an interactive map of the various hazards under different emissions scenarios for any location in the world, produced by Esri, which develops geographic information systems.  According to Dawn Wright, the company’s chief scientist:

“We see that climate change is literally redrawing the lines on the map, and revealing the threats that our world faces at every level,”

Michael E. Mann, a climate scientist at Pennsylvania State University who was not involved in the paper, said it underscored the urgency for action to curb the effects of climate change and showed that “the costs of inaction greatly outweigh the costs of taking action.”

Dr. Mann published a recent paper suggesting that climate change effects on the jet stream are contributing to a range of extreme summer weather events, such as heat waves in North America, Europe and Asia, wildfires in California and flooding in Japan. The new study, he said, dovetails with that research, and “is, if anything, overly conservative” — that is, it may underestimate the threats and costs associated with human-caused climate change.

Not mentioned yet is the extent to which new species of ticks and other parasites - including brain-infecting amoebas and parasitic worms - will make large tracts of the country uninhabitable. This is likely within the next 1-2 decades. Schistosomiasis? As the Wikipedia entry notes:

"The manifestations of schistosomal infection vary over time as the cercariae, and later adult worms and their eggs migrate through the body. If eggs migrate to the brain or spinal cord, seizures, paralysis, or spinal cord inflammation are possible."

In the years ahead, look for it in lakes from Florida to North Carolina and possibly even New York state and Vermont. What was once a horrific parasitic malady in the Caribbean will now become endemic in the US of A.    The takeaway is that hundreds of square miles may become uninhabitable as assorted pests take over, including dengue fever -spreading mosquitoes.

"Parasitic worms  seem to be proliferating and causing an epidemic as global warming intensifies. Mainly one species, identified as Taenia solium, or the tapeworm. Best known for inhabiting the human intestine, where they can reach a length of 21 feet - and make the victims feel as if they're constantly hungry.

Less well known is that before the worms become adults they spend time as larvae in large cysts, which may find their way into the brain (see image) and cause a condition known as neurocysticercosis. Lowball estimates suggest 5 million cases of epilepsy arising from this condition, worldwide. The numbers seem to be increasing as the worm -cyst invasion of the human body is increasing. Most of the cases, understandably, are in the less developed world.    But once the larvae migrate to the brain the cysts can live there indefinitely feeding off nutrients.

Has this likely been the agency affecting Trump's own mental state? Is he the victim of worms digesting essential nutrients in his brain? We don't know- but it would be the height of irony given how often he's dissed human-caused climate change.

For the rest of us,  we need to recognize the planet we once had is no longer. This, as our growing population combined with the deleterious effects of rampaging global warming - manifests. This is the disabled  world we will now have to bequeath to our kids and grand kids. Let us hope they don't curse us for doing too little!


Environmental Pol
See also:
http://www.smirkingchimp.com/thread/judith-schwartz/82177/concerned-about-climate-change-nature-wants-to-help
Posted by Copernicus at 7:49 AM