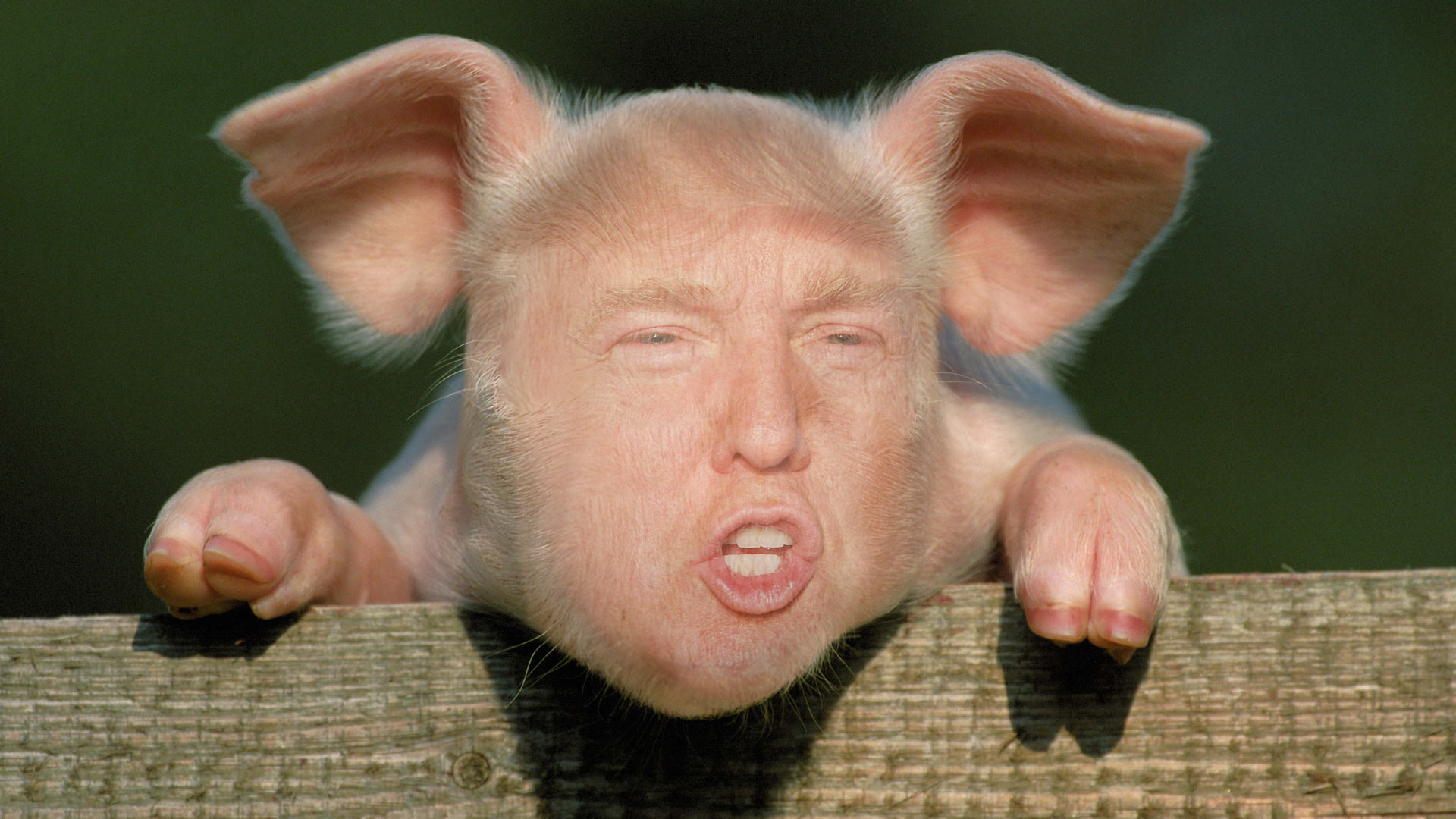 "I think Cindy Hyde-Smith is the greatest! Plus she's a white racist just like me! Oink! Oink! Sniff!"

Sadly, but predictably in racist Mississippi, Cindy Hyde-Smith won the state's special runoff election for the US Senate based on results coming in as I write. These show the racist harpy with a margin of 55% to 45%  over Democrat Mike Espy with 77% of precincts reporting. in a closer than expected race that stirred up Mississippi’s  nefarious racial history.

I myself only learned of the vile nature of said history in my freshman year at Loyola given I was situated across the Biever Hall dorm from two good old boys from Jackson:   Roy Woody and Bill Dooley. Late into the night we'd  vigorously argue the issue of race and  how their state - in the fall of 1964- could harbor backward laws that kept African -Americans from using the same restaurants, beaches, facilities that whites could.  According to Woody and Dooley, it was just the "way things were" and besides, the "blacks folks were happy 'cause they wanted to kinda be with their own."

My hostility to the South's Jim Crow laws originated from those Loyola bull sessions, and  was again incited yesterday when wifey and I saw the terrific, Oscar -worthy movie entitled 'Green Book'. It was about a black classical pianist (Dr. Donald Shirley)  traveling throughout the deep South in 1962 on a concert tour - with a tough  Bronx, Italian bouncer ("Tony Lip", played by Viggo Mortensen) as his driver and body guard. Well, he certainly needed the tough guy in a number of situations.

Anyway, the film reminded me once again of how things were in Mississippi in the 1960s, as well as neighboring states.  Janice herself was appalled especially in he scene where Dr. Shirley - who wanted to use a rest room at a particular venue - was directed outside to an outhouse instead. He wasn't allowed to step foot into the facilities in the mansion where he was to play.  "Good god! What kind of people were these?"   Janice asked. Well the same type as Hyde-Smith now.

To clarify, this runoff drew national attention after Hyde-Smith made a series of racially loaded remarks, most notoriously when she said of a supporter “if he invited me to a public hanging, I would be on the front row.”   The statement provoked controversy in a state that had more lynchings than any other  in the country, considering she ran against an African -American opponent, Mike Espy. Hyde-Smith was initially defensive about the comments - especially after more than a half dozen businesses pulled their backing and demanded their donations back.   She eventually offered the standard non- apology, i.e. regretting her remarks to “anyone that was offended”.  In other words, putting the blame on the offended for being "snow flakes" rather than her garbage self for spewing racist hate about lynching black citizens.

Her behavior and flippancy also recalled the "sundown" laws enacted throughout the deep South (and shown in at least one of the movie scenes, in Georgia) where all black people had to be inside by sundown or face lynching.  Both Bill Dooley and his roommate Roy Woody, confirmed for me they were still carried out in Mississippi in 1964.

A more notable question is why Dotard was out campaigning for this racist witch spewing his usual lies, like he was doing for a whole month before the midterms?  Well, the answers are obvious. First, he came out to support a kindred spirit, a fellow racist, and especially in order to increase the Repuke margin in the Senate.  Second, he wanted....needed....to get out and away from the White House -  a place that merely reminds him of his abiding incompetence and laziness. A place that continually mocks all he stands for because he knows he doesn't measure up. He is incapable of any serious activity, and is reduced to watching FOX news, tweeting and gobbling KFC chicken-   that is when hes not taking golfing breaks- more than any other president in history.

But we've known this, most of us, since day one when the swine arrived. Hell, five days into his presidency he  even bawled that the job had  turned out to be too much for him to deal. Too many details, too much stuff to master for an extensive government bureaucracy.  Hence, his penchant for becoming a cable TV and tweet addict. See e.g.

Much insight also arrived with Michael Wolff's book, 'Fire and Fury' - reporting that wife Melania cried after late returns showed Trump had enough electoral votes to win.   But it doesn't take a Mensan IQ to figure out that Wolff's  report on Melania weeping  was true and not fake news.  Why?  Because she - like the other Trumpkins - knew the Dotard.....errr,....."the Donald", was not cut out for a real job and especially one so intense, hyper scrutinized and high profile as the President of the United States. One in which he'd be lashed mercilessly if he didn't live up to the sane and sober standards of previous office holders, like FDR, JFK and Barack Obama.

As one reads from the book adaptation in The New  York Magazine:

"Even though the numbers in a few key states had appeared to be changing to Trump’s advantage, neither Conway nor Trump himself nor his son-in-law, Jared Kushner — the effective head of the campaign — ­wavered in their certainty: Their unexpected adventure would soon be over. Not only would Trump not be president, almost everyone in the campaign agreed, he should probably not be. Conveniently, the former conviction meant nobody had to deal with the latter issue."

The proof and evidence the Dotard ought not have been president was clear within weeks of his inauguration, and his many getaways to Mar-a-Lago or Bedminster. Why? Because the actual job of running the nation daunted him.  It is a job for which one needs all active brain neurons, and also keeping them working at full attention level. This Dotard Donnie Trump couldn't do, and so he wasn't even able to read a one page briefing or keep his mind on a meeting with staff or a head of state. Hence, the many references to him as a "fucking idiot", "moron",  "imbecile" and on and on.

Recall also the guy had never really worked at a real job outside of owning his family branding business wherein he could order anyone to do his bidding. Oh, and  a real estate weasel and con man who used bankruptcy (of multiple casinos) to make more $$$ mostly at the expense of state governments.

Bottom line? There is little evidence that Trump's campaigning for Hyde-Smith helped her one iota. More than likely, as analyst Cornell Belcher put it on 'All In',  Mississippi's own racial history would ensure that Hyde-Smith would win.  He cited solid historical facts from previous elections that indicated rarely if ever were Mississippi whites going to vote more than 25 percent for a Dem or a black man.  Hence, Espy basically didn't stand a chance- with or without Trump.  He needed at least 20-25 % of the white vote and he didn't get it.

What this shows me is that Mississippi (my late brother Mike's favorite state)  still doesn't get it.  The state would rather continue to grovel in its sordid and sorry racist past than to step boldly into the 2st century.  It's no wonder then on nearly every quality of life indicator - from education to health care- Mississippi ranks dead last, or near to it.

And so long as they keep electing racist dog whistlers like Cindy Hyde-Smith, that won't change.