What Does A Traitor Do When He Loses? He Starts A Constitutional Crisis!

"If Donald Trump's newly installed political hack of an acting attorney general takes action against special counsel Robert Mueller, the Democratic House of Representatives will bring Robert Mueller to testify publicly about exactly how the acting attorney general has interfered in his investigation. And the Democratic House of Representatives will move to impeach the president of the United States for obstruction of justice.  They will do it, they will have to, they will have no choice. The new members of the House will demand it."  - Lawrence O'Donnell, last night, 'The Last Word'

As Rachel Maddow put it last night, generally when a sitting president's party loses big in the midterms, he adopts a conciliatory - not combative - tone afterwards.  This hasn't been the case after the Dems yesterday reclaimed nearly a third (333) of all the state legislature positions lost in the Obama years, as well as recapturing the House. The House, let us be clear, confers full investigatory as well as impeachment powers. Any sane or normal, i.e. non-traitor president faced with this, therefore would have not adopted a bellicose tone the day after. He'd have bent over backwards to be a Mensch instead of an asshole.  This is why the WaPo proclaimed today that "Washington has now entered the prelude to a state of war".   Peace? You want peace? Not with Trump at the helm!

That is the nature of the depraved, deranged creature we have occupying the White House, as he defiles and divides the nation.   This is a despicable orange maggot who not only threatened the new Dem House if it launched any kind of long overdue probes ("I'll investigate them too!" ) but also fired the first shot in a looming constitutional crisis.

What  did he do? He fired current AG Jeff Sessions, and then -  in a blatant display of high thuggery and disrespect for law-  he appointed a two-bit political hack and Trump loyalist instead of the next man in line of succession, Rod Rosenstein.  The stooge and puppet appointed is  Matthew Whitaker , a name that will now live on in infamy. Why?  Because he shares the same gangster mentality as Trump, and a gangster attitude that says one is above the law, because you are backed by those who would corrupt the law. Why else accept an appointment for which all DOJ rules state he ought to recuse himself? Well, because now - after blabbing his intent as a pundit - he is in the very position to kneecap the Mueller probe he targeted.  This is why Trump dumped Sessions and inserted this jag off.  As MSNBC legal specialist Ari Melber put it last night ('Last Word'):

Is Whitaker's failure to reject the appointment surprising - based on glaring conflicts of interest-  not to mention prejudgments and broadcast intent to stop Mueller? Nope. Not when you have thug DNA in every fiber of your being. Thanks to primo investigatory work by The UK Guardian we now know this new acting attorney general was part of a company accused by the U.S. government of running a multimillion-dollar scam. In it, Whitaker was paid to sit on the advisory board of World Patent Marketing, which was ordered in May this year to pay a $26m settlement following legal action by federal authorities, which said it tricked aspiring inventors.

In other words, we have here not only a puppet stooge but a sleaze bag. Court filings in the case against World Patent Marketing - according to the Guardian --  show that Whitaker received regular payments of $1,875 from the Florida-based company, and sent a threatening email to a victim of the alleged scam.  Whitaker publicly vouched for the company, claiming in a December 2014 statement that they “go beyond making statements about doing business ‘ethically’ and translate those words into action”.

Whitaker’s role in the alleged scam was first reported by the Miami New Times in August 2017, shortly before he joined the Trump administration as a senior aide to Sessions.  This linkage itself came after shamelessly touting his willingness - as a so-so CNN pundit - to go to bat for Trump against Mueller if he needed him. Voila! Whitaker gets a nice cushy job at Justice as Session's puppet....err right hand man.

World Patent Marketing and its founder, Scott Cooper, were sued by the Federal Trade Commission in March last year. The government said it had “operated an invention-promotion scam that has bilked thousands of consumers out of millions of dollars”.  The company was accused of tricking hopeful inventors into paying it thousands of dollars to obtain patents and licensing deals for their inventions. In fact, they “failed to fulfill almost every promise they make to consumers”, the complaint said.

Emails filed to federal court show that in August 2015, Whitaker cited his former role as a federal prosecutor in a threatening email to a customer of World Patent Marketing who had complained about the company to the Better Business Bureau. Whitaker is shown below with Scott Cooper: 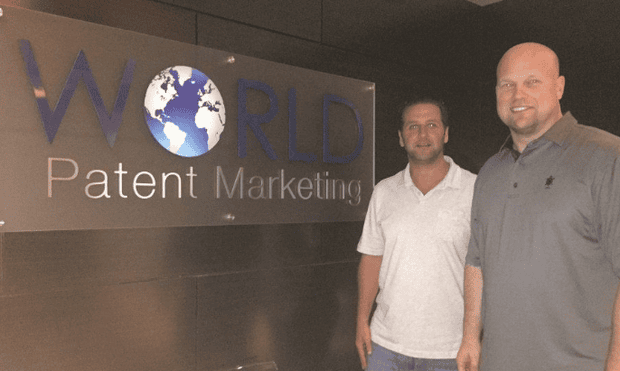 In May, a judgment requiring World Patent Marketing to pay the government $25,987,192 was entered against the company by a federal court in southern Florida. Whitaker was not named among the defendants in the case.

Now the relevant details in regard to Dotard's continued treason and obstruction of justice, of which this appointment reeks...in spades.  Two weeks ago I predicted two things to Janice: 1) The Dems would retake the House in a blue wave (though the exact definition would be subjective) and 2) Realizing a Democratic controlled House meant possible impeachment and reinforced protection for Mueller, Trump would a) get rid of AG Sessions and b) appoint a Nunes clone in his place to run interference against Mueller.

This is exactly what Traitor Trump has done with Whitaker's criminal appointment:  flouting the statutes for succession at DOJ.   In doing so let us understand, Trump has also taken the media's attention off his midterm losses and onto this disruptive act of a self destructive madman.   What can Whitaker do? Well, a lot to make Mueller's probe and life miserable if he wanted, and for at least 7 months - by which end point he either needs to be confirmed in the Senate, or vacate.  In the meantime, according to  Sarah Isgur Flores, a DOJ spokeswoman, in an email: “The acting attorney general is in charge of all matters under the purview of the Department of Justice.”

One thing Whitaker has openly proposed, by which standard he definitely needs to recuse himself, is pulling back funding for Mueller.  Yes, he has publicly proposed choking off funding for Mueller’s investigation and wrote an article for CNN last year declaring that the special counsel was “going too far” and needed to be brought under control.  According to Whitaker:

"The president is absolutely correct,  Mueller has come up to a red line in the Russia 2016 election-meddling investigation that he is dangerously close to crossing.”

So not only does the Traitor have a willing pawn to issue a 'get out of jail free' card on the Supreme Court in the person of Bawling Brett Kavanaugh, e.g. 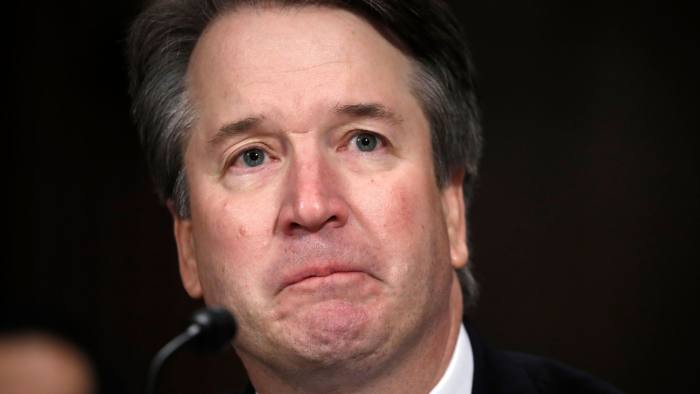 He now has a surplus toady, a 2nd "Devin Nunes" if you will, running interference for him as acting AG.  (Though as Lawrence O' Donnell correctly warned last night, if Whitaker has any ruminations about interfering in any way - even via lowballing Mueller's funding - he had better think twice because he also will be investigated for obstruction of justice.)

The whole thing smacks of a blatant,  in your face act of desperation and crass thuggishness fully worthy of impeachment proceedings. (Laurence Tribe, a constitutional law professor at Harvard, said Trump’s replacement of Sessions with Whitaker was arguably an impeachable offence in itself. “This rule of law crisis has been a slow-motion train wreck for a long time,” said Prof. Tribe).

The aim is clear: To use a pet puppet and political loyalist to derail or defund the Mueller probe. This ain't astrophysics, folks.  It shouldn't take a Mensa-level IQ to spot what's going on here, and how it is tied to the Ds midterm success, now acknowledged as the 'blue wave' it is, i.e.

Fortunately, at least some Reeps appear to have found spines and good sense and are warning the Dotard not to do anything else. Senator Susan Collins was among the first Republicans to warn: “It is imperative that the Administration not impede the Mueller investigation … Special Counsel Mueller must be allowed to complete his work without interference."

Mitt Romney, who won the race on Tuesday to become a senator for Utah, aimed his first broadside at Trump, tweeting: “It is imperative that the important work of the Justice Department continues, and that the Mueller investigation proceeds to its conclusion unimpeded.”

WSJ columnist Dan Henninger today ('Trump 2.0 Begins', p. A19) finally conceded in one of his least objectionable offerings: "Trump will have trouble reassembling his 2016  coalition unless his behavior changes."

Seriously? First, Trump will never change his behavior. He is a perverse, authoritarian narcissist for whom everything is about him. Asking or expecting Dotard to change his behavior is about as sensible as expecting the Pope will become a Buddhist monk tomorrow.  Second, this "coalition" was never real in the first place, at least in terms of getting the presidency for Trump.   On Nov. 8, 2016 MOST Americans rejected Dotard, by almost 3 million votes. In other words, the candidate who came in second in the vote was awarded the presidency through the outdated and anti-democratic institution of the Electoral College.  As Lawrence O'Donnell put it: "American voters did not want Donald Trump to be president".  So in fact there never really was a "winning" coalition, and even if one strenuously argues the EC is legit, it did not function as the Founders intended, i.e. in allowing an unqualified demagogue through.   See e.g.

The fact is that the Blue wave was the embodiment of the majority of Americans' disapproval of the Dotard residency from the day it began. This majority has been waiting patiently, mainly in a resistance movement to deliver its verdict. It did on Tuesday, with a number of results still being counted.

Meanwhile, Moveon.org and other progressives activated a plan for mass protests across the United States, starting today at 5 p.m. in all time zones.  John Brennan, former CIA chief, also predicted that it was likely Mueller had already completed his report for the deputy attorney general, Rod Rosenstein, who was yesterday relieved of his duty overseeing the investigation into Russian election interference and any collusion with the Trump campaign.

As I told Janice yesterday - and have the same advice for blog readers:  "Buckle your seat belts and hang on because we are a long way from any domestic tranquility!"

If you are tired of the chaos and division, maybe you need to consider moving to Canada.


2018 Elections | Donald Trump
Trump Appealed to the Very Worst in America. Too Often, It Worked.

Donald Trump Jr. Told Friends He Could Be Indicted This Week — and the President Is 'Depressed' About the Possibility: Report
Posted by Copernicus at 7:22 AM