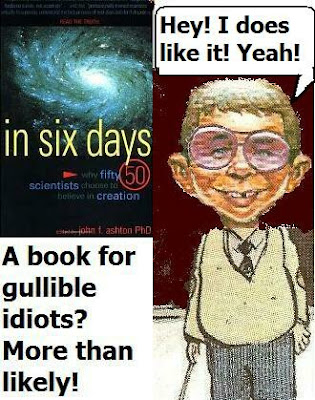 Over the decades my run-ins with pseudo-science have been numerous and telling. Starting with Immanuel Velikovksy's Words in Collision foolishness (which I devoted a full journal article to a takedown) to "Jupiter Effect" codswallop and most recently the Mayan "2012" End of the world malarkey. In whatever guise it arrives in, pseudo -science (which I define as specious nonsense practiced in the name of science) has more often than not held progress back by causing intellectual capital to be squandered on bogus issues, red herrings, or phantasms that have no business remotely being called science! But try to tell that to its indefatigable peddlers.

The latest addition is a book now making the rounds among the brain-dead segments of society entitled, In Six Days: Why Fifty Scientists Choose to Believe in Creation and edited by John Ashton, a man who ought to be thoroughly ashamed of himself as well as the other twits who lent their "testimonies" to this farrago of foolishness. I deliberately write testimonies because that is what I saw delivered in its 380-odd pages, not evidence for their claims. The word 'testimony then is appropriate, being the word for what one beholds at religious revivals and assorted similar events. People stand up (at the call of the "spirit") and spout off for hours (or minutes) on experiences to which we're supposed to allocate gravitas.

Let's also get certain preliminaries out of the way here, once and for all. There is NO such critter as "creation science"! In order to qualify as a bona fide science one must demonstrate objects of inquiry and investigation unique to one's thesis, as well as disclose at least ONE test for the falsification. Creationists have done neither, merely recounted assorted grievances they have with Darwinian evolution. Hence what they have is a dogma of religion, NOT a science! As Victor Stenger put it in his book, The New Atheism: "Faith has no checks and balances, no follow up investigations to see if an intuition works. Science does".

Moreover, it does so in the context of a specific PROCESS that embodies successive approximations to objective truth. Something "religulous science" and its phonies will never comprehend. It pays to look in detail at how this process unfolds.

You have data, and accessory information which leads to some initial result which tests a particular hypothesis- call it 'x'. Say that x = “the Sun is a variable star”, i.e. it varies in its luminosity or energy output over time.

This might read, based on our example: “The Sun is a variable star which changes energy output coincident with the numbers of its sunspots”

Here the additional term “P(x)” embodies the sunspot component for energy. A good example of this was during a specific period (1645-1715) over which there were very few or no sunspots. The interval, called “the Maunder Minimum” featured much colder than average temperatures which also adversely affected crop outputs. Cooler temperatures have also been found over the last 5 or 6 years which coincide with a sunspot dearth that has lasted from the end of one cycle (23) to the beginning of a new one (24).

Thus, the term “x(n +1)” denotes an improvement via iteration, with P(x) the process acting on x that allows it. In this case, sunspots modulate the energy production, at least over some short or periodic times. To fix ideas, the maximal magnitude of inherent solar -induced climate variability was probably first highlighted by Sabatino Sofia et al in their paper: Solar Constant: Constraints on Possible Variations Derived from Solar Diameter Measurements, in Science, Vol. 204, 1306, 1979. Their estimate was a solar change in irradiance of roughly 0.1 % averaged over each solar cycle. (Irradiance is a measure of the energy per square meter received from the Sun).

Thus – if the solar irradiance effect at Earth (solar constant) is normally about 1360 watts/m2, this would imply an increase of roughly 1.36 W/m2. More recent space-based observations appear to show a variation in solar irradiance of at least 0.15% over the standard 11-year solar cycle. (E.g. Parker, E.N., Nature, Vol. 399, p. 416).

Going on from our original hypothesis and its subsequent refinement, we may determine:

Described perhaps as: “The Sun is a variable star which changes energy output coincident with the numbers of its sunspots – but not always"

Such a modified hypothesis may well allow for the existence of secondary energy modulating effects, perhaps owing to more esoteric processes deeper in the Sun. The part of the term seen as the factor (x + 1) applied to P’ means there is some datum or data forcing a change in the hypothesis to a less falsifiable statement.

In terms of solar data, we have found up to an 8% difference in the computed mean irradiance from differing perspectives. One explanation put forward is that the meriodonal flow just below the solar surface is slowing, or perhaps almost ceased. This would delay formation of sunspots at the proper solar latitudes even when high sunspot counts ought to be expected (from standard Babcock-Leighton solar dynamo theory)

How might we get to the next iteration of our hypothesis? Say:


For that, it appears we may require maps of subsurface solar flows, not merely the generic “dopplergrams”. The latter are not as useful as they might be for data to force the refinement of the hypothesis onward, because they exhibit brightness variations in different (spectral) bands which may not always arise from motions. Thus, differential brightness changes observed in dopplergrams may yield motions that are erroneous.

Here, we see that a given datum based on some specific instrument, can lead to a false result or interpretation. This necessitates more refined devices or instruments to press the case forward.

In the preceding, I have only given a very rudimentary outline of how the development of a real, as opposed to specious, hypothesis might progress. The core aspect to take from this is that each x, x(n+1), x(n+2) etc. represents a successive approximation to what the objective, genuine statement of hypothesis should be.

My point in conducting this exercise, is that THIS is exactly what the reader needed to see from one of those fifty illustrious "scientists" included in the 'Six Days' volume but which was glaring by its absence. In no case, not one - in all the fifty testimonies - did any of these 50 goof balls take us through a process similar to the one I demonstrated above, to arrive at the conclusion that there is any real (falsifiable-testable) evidence for design, or that the law of gravitation is anything other than what it is: a coordination of forces, masses and constant to achieve a particular prediction in time for some event in celestial mechanics. None of these idiots has demonstrated one thing, in other words.

One of the worst travesties in this whole pile of gobbledegook, is in "Testimony 16" where one Mr. Larry Vardiman proves he ought to have all his academic qualifications pulled in one fell swoop. This looneytune actually writes:

"The Second Law is undisputed by all reputable scientists and contradicts the basic premise of evolution."

But, as I showed multiple times, this is bollocks! BARE ignorant bollocks! The Second law (which I recently treated in Sec. 15 of my Thermodynamics Basic Physics blog, cf. the Kelvin-Planck and Clausius statements applicable to heat engines and Prob. #5) says no such thing! The Second law of thermodynamics does not apply to the Earth (or organisms on it)in the sense that entropy can only increase because the Earth is not a closed system. Thus, for any two bodies (e.g. the Earth and Sun) the total entropy either remains constant or increases, and more likely the former if the (coupled) energy exchange system isn't closed. There is plenty of energy input every day from the Sun. This is why the creationists' arguments that evolution can't be true due to the 2nd law are wrong.

It's estimated that solar radiation hitting earth could supply about 25,000 times the total amount of energy currently used in the world. Every second, some 1360 Joules is incident on every square meter of surface, much of which will be absorbed by any green plants for photosynthesis. Animals can then consume these plants and thereby obtain the (chemically bonded) solar energy constantly flowing in. This they will then use for further evolution! Yes, entropy may then statistically increase a bit, but as the new influx of solar energy occurs, the total becomes constant again, since entropy (unlike energy) isn't conserved.

And then, as if to compound his earlier foolishness, Vardiman writes:

"The most telling argument for me in rejecting evolution, however, is the meaninglessness and lack of value it signifies. If evolution occurred, then my existence is not a special event in the Creator’s plan."

But see, the problem is that's no argument! It's a value judgment made by Vardiman to try to support a conjecture the universe had to be created. Not only is he guilty of appealing to the argument from ignorance (imputing existential meaninglessness to evoluton as a process because he doesn't understand natural selection), but also to begging the question (invoking a "Creator's plan" as an answer to address his existence) as well as affirming the consequent, i.e. starting out by stating that which he needs to prove or demonstrate. Again, this is the "Creator's plan" upon which he rests his "special existence"! However, he's proven NO "Creator's plan" exists other than in his own febrile brain! What is the empirical evidence for this plan? How can its existence be tested? How can it be integrated into existing scientific forecasts, say for looking for new black holes, or even pinpointing the location of soalr flares?

It is pathetic gibberish like this which renders the book unfit for any serious person to base any life lessons upon, far less intellectual substance. This load of dreck and drivel is expressly designed for the "born again choir" and their brain-damaged associates. It certainly won't provide any "ammunition" against atheists - who will easily be able to rip it to shreds- but it will provide loads of jollies and laughs for any unbelievers. It discloses the levels of desperation these outcast "scientists" will go to in order to try to attain some level of respect, even though the vast majority of their peers will regard them as pathetic. They could as well have save their "testimonies" for their churches.
Posted by Copernicus at 1:27 PM