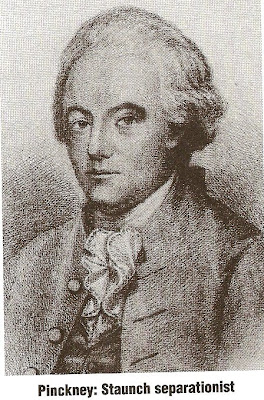 One of the most crucial articles of the U.S. Constitution is Article VI. Three paragraphs long, it essentially makes clear that document is the supreme law of the land and judges, elected representatives are bound to adhere to it. The provision also states that all public officials will be required to swear an oath, NOT to the bible, but to the Constitution. It then adds in clear English:

"No religious test shall ever be required as a qualification to any Office or public trust under the United States."

This stipulation was entered compliments of one Charles Pinckney, a 29-year old delegate to the Constitutional Convention from South Carolina. Though Pinckney knew such religious tests were common in many state constitutions he had no use for them in the federal system which would always supersede that of the states. Thus, he fully rejected what passed for muster in the states. This didn't mean that he got his way unopposed.

He actually resorted to good old fashioned political maneuvering to get his way. At first his "no religion test" clause was shunted off to a committee, but undaunted Pinckney brought the proposal up again on the full floor. The measure was seconded by Gouverneur Morris and adopted by the entire convention "by a very great majority" as one member put it. In fact, given the background from which most colonists came -that of internecine religious warfare and persecution - this should not have been suprising. The only real surprise is why there was any hesitation adopting it at all.

Of course, the new Constitution had to be then approved by the states, and delegates from North Carolina provided opposition, with one member fulminating about the possibility of "pagans, Deists and Mahometans" seeking office. Hmmmm.....reminds one of the climate today when so many fret about any non-believers seeking office!

Nonetheless, James Madison leapt to the defense of Article VI in 'The Federalist Papers' calling it one of the highlights of the proposed Constitution. Thus, the provision for no religious tests remained intact. Beyond this, Pinckney also tried to go further, drafting another provision that "the legislature of the United States shall pass no law on the subject of religion". However this didn't make it through. Had it done so we might have been spared such bunkum as changing the words of the Pledge of Allegiance, and even remotely considering prayers in public meetings.

The sad aspect today, is that Article VI is almost unheard of among Americans, espcially that percentage who in poll after poll ignorantly assert there must be a religious test for public office. What the hell country are these bumpkins living in? Do they even KNOW their nation's Constitution? Can they even interpret it? Yet most forlorn voters today seem most comfortable with candidates who embrace a "faith" considered part of the mainstream. Atheists get special short shrift, but this need not be astounding.

A University of Minnesota study (in March, 2006) by Penny Edgell, Associate Professor of Sociology, and co-authors, Doug Hartmann and Joseph Gerteis reported that a significant number of respondents associated atheism with an array of moral misbehavior, including criminality and materialist emphasis. In addition, the findings “seemed to rest on a view of atheists as self-interested individuals who are not concerned with the common good.” This is nothing short of astounding given that as a nation and people, Americans are notorious for giving short shrift to the “common good” as evidenced by consistently voting for no-tax or tax cutting candidates, when they know the outcome will starve government of the resources needed to advance the needs of the vulnerable, such as the 47 million currently without any health insurance.

Sadly, until and unless Americans of every stripe become more informed about their own national history and especially their Constitution, this type of myopic and self-serving idiocy will continue. When the nation gets its first Atheist president, who also has no truck for any "national prayer days", we will be sure that has changed.
Posted by Copernicus at 8:00 AM