How Cyanobacteria Saved the Earth - for Humans! 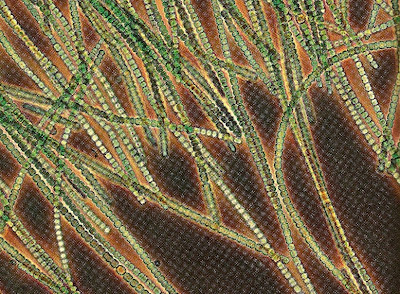 Some 3.85 billion years ago, our planet wasn't an abode humans would've been able to live 5 seconds in, far less five minutes or five hours. Apart from the temperatures, the atmosphere was an unbreathable reducing one comprised mainly of methane (CH4) and some ammonia and CO2. Not a very healthy environment for "Adam & Eve"! Does that mean that NO extant life forms were around then? Not at all!

In earlier blogs I noted the presence of methanotrophic bacteria, or primitive organisms able to actually ingest and use the abundant methane for their metabolic processes. The key research on discovering these bacteria was done via the use of the radionuclide (isotope) 'delta- C13' and published in the paper: Evidence for Life on Earth More Than 3850 Million Years Ago, in Science, Vol. 275, 3 January, 1997, p. 38, by H.D. Holland. Now, new research appears to show that the emergence of a radically new type of 'cyanobacteria' (see image) some 2.5 billion years ago resulted in a mass-extinction of the earlier methanotrophic bacteria. This has been published in the Journal BMC Evolutionary Biol., Vol. 11, No. 45 (2011) by Shirrmeister et al.

Few humans today (apart from microbiologists) may appreciate just how critical a role was played by these cyanobacteria. They essentially were single-handedly responsible for chemically converting a toxic atmosphere of methane, NH3 and CO2 into an oxygen and nitrogen one conducive for the evolution of higher life forms, including the fish, amphibia, reptiles, and ultimately humans. Their key trick for doing so was the development, perhaps by a random mutation, of chlorophyll units or organelles (giving them their color) that enabled the conversion of CO2 via photosynthesis, to O2.

Then, over the course of their slow evolution, these prokaryotes (note: a prokaryote has one chromosome only, dispersed in its cytoplasm) 'donated' their light-harvesting organelles to plants while also acquiring a nitrogen harvesting mechanism which then paved the way for a whole diverse array of multicellular organisms. In no small measure, humanity has these tiny bacteria to thank for even being able to have a chance to evolve and lay claim to this 3rd planet from the Sun!

Alas, few cyanobacteria have actually been gene-sequenced so their evolutionary history and phylogeny is relatively unknown. This is where Shirrmeister et al's research proved even more important. They employed multiple phylogenetic analyses on the existing limited number of (165rDNA) cyanobacterial sequences available to compare the resulting (phylogenetic) trees with established morphologically derived neighbors and to the fossil record. This investigation resulted in uncovering a monophyletic (single phylum) tree that identified Gleobacter as the nearest outgroup, and Chlamydia as the closest eubacterium. (Readers may recognize the latter as being the culprit responsible for one form of sexually transmitted disease, or STD).

The interesting aspect of these bacteria is that despite their rates of evolution being relatively slow, they organized into multicellular forms several times to acquire some specialization. Are they some kind of bacterial "shape shifters"? Could be! Astoundingly, they also acquired this multi-cellular ability long before the eukaryotes did (note:A eukaryote has multiple chromosomes dispersed in its cytoplasm). Since achieving this shape-shifting ability, the cyanobacteria evidently have evolved into three major clades or "families" which have shifted between unicellular and multi-cellular forms.

Maybe one can more truthfully argue that these strange bacteria remade the planet to enable all other higher eukaryotes to inhabit it. We certainly have these tiny shape-shifters to thank for our being here at all!
Posted by Copernicus at 9:45 AM