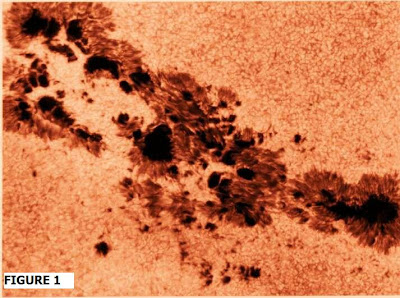 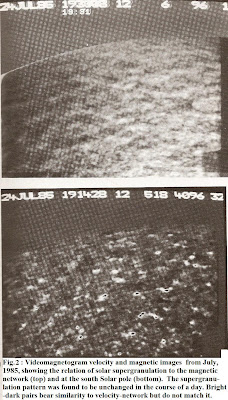 Jason Lisle, in his Ph.D. dissertation ('Probing the Dynamics of Solar Supergranulation and its Interaction with Magnetism'), makes the claim that by using Michelson Doppler Imager (MDI) velocity data (from the SOHO spacecraft) in concert with local correlation tracking techniques, he was able to develop adequate "refinements" in the latter and thereby excavate enough signal to ascertain a "persistent N-S alignment" which is taken to be a polarity preference associated with the supergranules. As I intend to show, this conclusion is suspect and doesn't hold up when the foundational assumptions (and error techniques) are examined more closely.

One thing any solar researcher or worker ought to be able to relate to, and to concede, is the ever present trap of selection effects. These can often creep into an investigation even conducted with the best intents. As an example, in my (1980-86) investigations of the origin of SID flares associated with certain active regions, an early conclusion was that the most geo-effective (i.e. able to disrupt terrestrial communications, or cause the most intense sudden ionospheric disturbances) were associated with the most rapidly growing and magnetically complex sunspots. (Fig. 1). These were typically the largest delta -class spots with numerous magnetic polarity intrusions (e.g. one magnetic polarity intruding deeply into another causing large magnetic field gradients).

However, on performing a deeper analysis which included cross-referencing all SIDs to all optical flares (of all classes) appearing on all available H-alpha films (e.g. over all Carrington rotations in 1980) and validated via the x-ray signatures from the SMS-GOES satellite) it was found this was a premature conclusion. Indeed, contrary to the overall rubric that only large area, delta spot- populated ARs spawned powerful SIDs (and hence associated SID flares) I found that nearly 35% of all major SID flares (which generated the largest SID effects) were associated with optical subflares. (Solar Phys., Vol. 92, p. 259). In other words, the counter-intuitive finding was that just over one-third of the largest SID flares arose from the smallest energy optical flares (typically 10^21 J ). A test of the sampling errors using the coefficient of determination confirmed this.

I point this out because very early in his dissertation (p. 17), Lisle concedes an inability to properly resolve granules via his MDI data, though he does make an appeal to local correlation tracking (LCT) as a kind of savior since it allows motions to be deduced from the images even when individual moving elements aren't well resolved. (I.e. the granules are the individual elements or units of supergranules). The question that arises, of course, is whether the product of such LCT manipulation is real, or to put it another way, an objective physical feature that is not associated with instrumental effects, distortions or errors.

Exacerbating this suspicion is Lisle's own admission (ibid.) that LCT "suffers from a number of artifacts". One thing any worker in the field ought to know is that any time an artifact appears, however it does so, it's time to put on the warning radar. (Lisle evidently does this but as I will show, this isn't enough).In Lisle's case the warning is sounded by the emergence of a "large-scale, disk centered convergence anomaly". He notes this is due to a selection effect on granules and the anomaly can be mitigated by further treatment.

This is normally attainable, but again, removal of scale selection effects depends on the scale of the anomaly- especially in relation to the sought after signal. In my SID flare studies at a particular scale, it appeared that solar spicules in the vicinity of large, delta-spot penumbra were scenes of emergence of optical subflares that spawned major SIDs. But when all the incidents of these correlated spicules were assembled, then subjected to a Fourier analysis (and compared with velocity field and vector magnetogram data) the signal vanished. Evidently, aberrantly bright spicules (in the centerline) were erroneously recorded as optical subflares though they were nearly 10-15 x less in energy. (Correction could be made when the spectrum was observed in the wings, which disclosed darkness). In this sense, the anomaly manifested itself as a much diminished signature which appeared more energetic than the actually sought signal, while in Lisle's case, the anomaly was already much larger than the sought signal scale (by about ten times). In their Astrophysical Journal paper (Vol. 608, p. 1170), 'Persistent North-South Alignment of the Supergranulation', Lisle, Rast and Toomre assert that:

supergranular locations have a tendency to align along columns parallel to the solar rotation axis.... this alignment is more apparent in some data cubes than others

They also add: The alignment is not clearly seen in any single divergence image from the time series of this region (Figs. 1a–1b) but can be detected when all 192 images comprising that series are averaged

This also ought to have raised some suspicions as to whether it is really a spurious signal emerging in the series averages. For example, an averaging of SID-flare intensity data would show that the original (spurious) conclusion I gave above was the appropriate one, i.e. "only large area, delta spot- populated ARs spawned powerful SIDs (and hence asociated SID flares)"

Going back to the same Ap.J. paper, the authors write:

The anisotropy observed in the time-averaged image of Figure 1c is not a property of the individual supergranules but is instead due to a weak positional alignment, producing vertical striping with nearly the same horizontal length scale as the supergranulation itself.

The north-south alignment of the solar supergranulation is observed only after long temporal averages of the flow. After 8 days of averaging, the striping is quite strong, while shorter averaging times show the effect less well.

In Figure 3a, s[x], s[y] , and their ratio s[x]/s[y] are plotted as a function of averaging time. The plots show the average value obtained from two independent well-striped 15 deg x 15 deg equatorial subregions of the data set

In the above, s[x], s{y] refer to the rms or root mean square errors.

Now, the key link to the persistence of the "polarity" alignment as the authors put it:

" s[x]/s[y] shows a smooth transition from values near one at low averaging times to values exceeding 2.5 for the full time series. This increase reflects the slow decrease in x compared to y due to the underlying longitudinal alignment of the evolving flow. The random contributions of individual supergranules to s[x] or s[y] scale as 1/(Nl)^½, where Nl is the number of supergranular lifetimes spanned over the averaging period. Vertical striping of the average image emerges visually when the averaging time exceeds the supergranular lifetime by an amount sufficient to ensure that the contribution of the individual supergranules falls below that of the long-lived organized pattern. The slowly increasing value of s[x]/s[y] at very long averaging times suggests that the underlying organization is persistent in time, with a lifetime > or = 8 days.

The underscored segment above is critical, since Lisle in his dissertation refers to a "false flow" whenever his larger tile size includes more granules. In effect, an additional flow anomaly has been engendered because of the effects of including larger boxes (usually 5 pixels by 5 pixels) which have more granules. This is in addition to the large central convergence artifact. Which brings us to the use of the asymmetrical outcomes for the rms error ratio: s[x]/s[y] upon which the conclusion of persistence appears to rest, i.e. from the authors' foregoing description, which is also based on Lisle's dissertation - but which one is prevented from extensively quoting from (owing to copyright restrictions!) Hmmm...wonder why?

Anyway, the use of the error ratio s[x]/s[y] as a "rosetta stone" to uncover this "persistence" of pattern can't really be justified, and it's a pity that the referees of the Ap. J. paper didn't see this - but then my own original Solar Physics paper had to be referred to more capable statistics-trained referees because the first one couldn't handle it!

Without wishing to make this overly long, I refer readers to the excellent paper by James G. Booth and James P. Hobert ('Standard Errors of Prediction in Generalized Linear Mixed Models', appearing in The Journal of the American Statistical Association (Vol. 93, No. 441, March 1998, p. 262) in which it is noted that standard errors of prediction including use of rms errors, and ratios thereof are "clearly inappropriate in parametric models for non-normal responses". This certainly appears to apply to Lisle et al's polarity "model" given the presence of significant "false flows" and "large convergence artifacts" (the latter with 10 times the scale size of the sought signal). The authors meanwhile recommend instead a conditional mean-squared error of prediction which they then describe at great length. They assert that their methods allows for a "positive correction that accounts for the sampling variability of parameter estimates".

In Lisle et al's case, the parameters would include the propagation speed of supergranule alignments, after their s[x]/s[y] is replaced by the rubric offered by the J. Am. Stat. Soc. authors, including the computation of statistical moments (p. 266) to account for all anisotropies and other anomalies which appear.

Until this is done, it cannot be said that there exists any "persistent alignment" in the solar supergranulation! Sorry, boys...and Ap.J. refs, and editors!
Posted by Copernicus at 10:34 AM