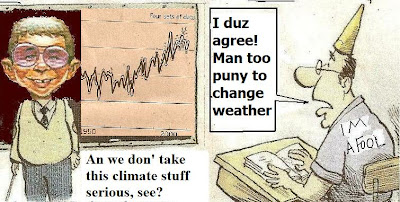 We've already beheld the imbeclility of Texas Governor Rick Perry in believing he can actually alter the momentum of climate change (caused by humans) simply by getting on bended kness and making some appeals to an imagianry higher power. Now, on perusing today's paper (Denver Post) I see other climate change deniers are given more space than those with a sober, realist outlook. Where does it end? More specifically, when does the mainstream media cease giving attention to these ignorant loons?

The letters published today followed an excellent article that appeared on Sunday past by Auden Schendler, noting his own observations of how severe climate change has disrupted the natural weather cycles here in Colorado and what it portends. He also had the prescience to warn of the dire effects if we continue to do nothing to change our behaviors which incepted the problem in the first place. Of course, the worst case scenario is the runaway greenhouse effect, and it certainly isn't a phantasm of anyone's mind!

Anyway, let's examine more closely what two of the nitwits (in the mold of Jim Inhofe, R-OK) had to say. Chris R. Holz writes:

Thank you for publishing the guest commentary by Auden Schendler. Mr. Schendler mentions Colorado’s higher-than-average anticipated spring runoff and uses it to project global disaster and a pure survival future devoid of schools or hospitals. By inexplicably adding comments about funding for schools and our highway system, Schendler exposes his political agenda, using fear-mongering about climate change as the catalyst.

You are doing your readers a tremendous service in publishing this type of nonsense, because it exposes what is becoming an increasingly irrational fringe group of extremists. While the scientists themselves are much more humble in their efforts to understand our climate, people like Mr. Schendler just need to look at a healthy snowpack to conclude mankind is doomed. Forgive me if I don’t panic.

In fact, what Schendler wrote was the following as per the issues of catastrophic consequences raised in Holz' first paragraph:

The science tells us that one of the consequences of climate disruption is a world like Cormac McCarthy described in his novel "The Road," a pure survival society, stripped of discretionary pursuits, stripped even of schools and hospitals. The fear is that emergent challenges — floods, droughts, storms, threats to food and water supply, damage to infrastructure — will trump all else.


While Holz hasn't a clue, Schendler is spot on in what he projects: a pure survival society. The pity is that critics like Holz and his ilk lack even the basic insight and intelligence to be able to piece together and extrapolate to future conditions. But let's explore this a bit.

Right now two ancillary climate change agents are operating in tandem to incept just the type of world one found in 'The Road' (except the one we face will have unrelenting heat as opposed to cold). The first is the increasing acidification of the oceans, which if it continues much further- turning ocean water to highly concentrated carbonic acid (H2CO3) will kill most of the plankton, as well as larger marine life. A least one half of all the world's food sources could be gone inside of 20 years.

The second agent, is the spread of tropical diseases (such as cholera, and dengue fever) to temperate zone lands as the ambient temperatures increase. A first warning of this appeared in the paper: Global Climate and Infectious Disease:The Cholera Paradigm, in Science, Vol. 274, 20 December, 1996, p. 2025. The power to make this diseases even more lethal (and beyond even the power of any drug to halt) is the horrific superbug gene NDM-1 (first traced to New Delhi, hence 'ND')that has been identified with super-cases of cholera as well as dysentery in India. The potential for this bug to embed in a host of pathogenic organisms and wreak absolute havoc (in a world grown antibiotic resistant) is truly terrifying.

If people think the current invasion of West Nile fever is bad, wait until they're faced with dengue fever (which I caught in the West Indies - and which can - after the 3rd successive bite-infection - lead to hemorraghing from all body orifices). Wait until cholera becomes endemic and other hitherto unseen (and unheard of) diseases appear. Then the morons will understand the enormous downsides of their 'warmer' world and huge price for their 'longer growing seasons' (sic).

The other aspect that dolts like Holz don't wish to face is that even if temperatures increase another 3F, it will translate into extended heat waves possibly lasting weeks or months. The demand on power grids, power supplies, will be such that even nested utilities won't be able to meet it. People will then be without electricity perhaps for days or weeks at a time. Much longer, and with major food spoilage and NDM-1 fueled diseases lurking, and you have a situation not far from that depicted in 'The Road'.

Thus, Holz is merely demonstrating his abominable ignorance if he claims Schendler is using "fear-mongering about climate change as a catalyst" for a political agenda. To put it bluntly, the man's an idiot - certified through and through. And no, when I encounter such dolts I don't make nicey-nicey. The time is short, and we can't afford to lull people into thinking we have all the time in the world by practicing niceties on idiots that are using their palaver to render even more fellow citizens as brain dead as they are.

Holz is also dead wrong if he believes Schendler's prognostications are merely from "an increasingly irrational fringe group of extremists". In fact, most climate scientists I know (in the American Geophysical Union) are absolutely terrified of the prospects that - indeed - we may be well on our way into the runaway greenhouse effect. They simply don't come out and say as much out of fear of inciting panic. Also, there are political downsides to consider, which also impacts on their continued funding for further research. If they make too much noise about the real impending nature of the threat, they're liable to be denied further funding (in a turnabout from the half-cocked theory of deniers that climate scientists use fear to get more funding). But truth be told, the powers-that-be don't wish to be reminded by smarmy scientists of such impending threats, which reflects on how little they (the politicians) are doing in meeting this crisis.

On that note, we surely can forgive a bozo like Holz if he "doesn't panic". But I will tend not to have too much sympathy for him when he catches the next case of dengue fever anytime soon, or otherwise experiences devastating climate -induced traumas. I will simply say: "Told you so, buddy!".

Letter write Kevin Woolley, who also had his say, is also a wooly thinker. He writes:

I’m not aware of a single scientific group that would agree with the assertion that global “climate disruption” will result in the annihilation of all life forms on planet Earth. Perhaps Auden Schendler is spending too much time at the movies.
Global temperatures have risen 0.75 degrees Celsius in the last 100 years by most estimates, and I haven’t found myself battling with my neighbors for the last tin of sardines on Earth, and my life hasn’t been anything like “Mad Max.” In fact, if the last 100 years are any predictor, humankind will continue to improve its lot even more dramatically, especially in Asia, where billions of people are moving from abject starvation and poverty into relative self-sufficiency and even wealth.
Somehow “joy” will still exist even if the Earth warms a little.

Again, his not being "aware" doesn't mean there aren't hundreds of climate scientists worried about immediate climate upheavals, including the collapse of the Greenland ice shelf. He also ought to be GLAD he isn't aware (as I am) of all the climate scientists who think that a runaway greenhouse is imminent and in our future, even if at the cusp. This process would certainly lead to the annihilation of all life on this planet, because the ultimate end is as the name suggest, a "runaway greenouse". More and more heating, and more prevention of heat escaping - until we become another Venus.


Hadley Center predications for runaway by 2050

Woolley is also a bit off in his temperature increase estimates, which most climate scientists now accept as ~ 2F or 1.1 C. But even another 0.9 C is capable of producing catastrophic effects, such as massive ice melt in the Arctic and rising sea levels - perhaps as much as 0.6- 2.0 m.

As for the time of "battling with neighbors for cans of sardines" - well, by then it will be too late! Such a scenario would show a severe food shortage and likely transportation incapacity as well ...perhaps as a result of severe buckling of roads from heated asphalt, as well as heated rails. Neither trucks nor trains would then be able to get goods to markets, stores... So unless people grow their own foods (which would also make them subject to praedial larceny) they're out of luck.

As for Woolley's forecast that "humankind will continue to improve", based on the past 100 years, that's plainly idiotic. First, at the start of the last century Earth's population was barely 2.3 billion compared to 7 billion now. That difference also translated into much less CO2 produced, since more people means more fossil fuels consumed, as well as food. The fact we will shortly have 10 billion people, means even more will be at risk given food shortages from climate change and new diseases spreading from antibiotic resistance. Thus, all the indicators show WORSE conditions even if one uses the most rudimentary markers to project ahead.

But will these dense Pollyannas listen and learn? I doubt it! They are too ensconced in their coccoons to stir themselves to action...real action. So.. I guess they'd rather get on their knees and pray to Jesus for deliverance. Meanwhile, a savage scenario like that in 'The Road' awaits!
Posted by Copernicus at 10:32 AM