The "God Particle": A Synthetic Reality? 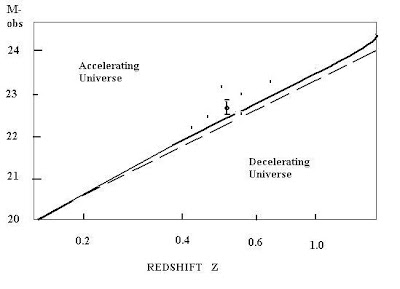 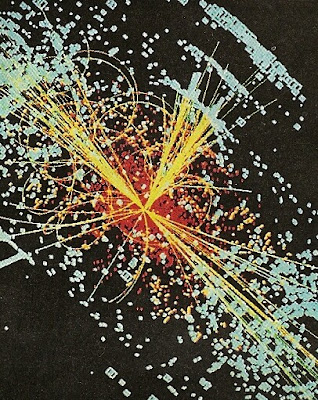 Accepting that much of modern physics is derived from secondary or tertiary artifacts and effects is no easy thing. We want to believe, despite the fact we must generally invoke an arduous, supplementary parsing process, that entities such as black holes, quarks, leptons and positrons just spring directly from reality to the observer's eyes. But this is a fiction. Most of what we have assembled in modern physics (maybe 95%) is only established by virtue of the ineluctable process of filtering and removing accessory phenomena.

By way of example, dark energy is detected primarily based upon plots of Type Ia supernovae (using observed magnitude v. redshift z). In the graph shown (accompanying diagram) , the type Ia data points all fall to the LEFT of the thick dark line, or in what we call the 'accelerating universe region'. On the other side of the diagonal is the "decelerating region". (See, e.g. 'Supernovae, Dark Energy and the Accelerating Universe', by Saul Perlmutter, in Physics Today, April, 2003, p. 53.) In the paper cited the conclusion is drawn that the only agent able to produce the acceleration is dark energy. Precision measurements of the cosmic microwave background (CMB), including data from the Wilkinson Microwave Anisotropy Probe (WMAP), have provided further evidence for dark energy.

In terms of solar physics and the supergranulation of the Sun, a related discovery by way of secondary data filtration and extraction (and which I will attend to in more detail in future blogs) was the "discovery" that super-granules exhibit a preferred N-S orientation or polarity. However, Jason Lisle et al (who first claimed this discovery) didn't observe it directly but rather had to extract a SIGNAL they interpreted as a preferential orientation of supergranules. They did this by assembling "data cubes" bearing "merit tiles" and having specific scale dimensions (e.g. 5 x 5 pixels) which they then imposed on the supergranulation via specific instrumentation (e.g. Michelson Doppler Imager) with its own associated errors, after trying to remove selection effects (such as 'centered convergence artifacts') possessing flow motions of 10 times that observed for supergranules. Obviously, the large scale effects of the latter would tend to blot out any signal for the less pronounced supergranule alignments, in the same way clouds of ancillary particles would tend to distract from identifying the Higgs.

In terms of particle physics, the identification -detection of the "Higgs Particle" (also called the "God Particle") poses a similar challenge. (The graphic attached depicts how the Higgs may be discovered after all extraneous particle signals are removed). Thus the Higgs will be "conjured up" as it were, in the Large Hadron Collider (LHC) by smashing billions of heavier particles (hadrons) together, then removing the "noise" (non-Higgs intruders) and subjecting the filtered data to a rigorous statistical analysis. This will be determined by the "sigma" (s') - the key marker of statistical significance for these type of tests. If s' = 3.2 it translates to one chance in 1, 300 of being a random fluctuation. It's also well short of s' = 5 (less than 1 chance in 3.5 million) which is the threshold to pronounce a new discovery.

What all the above implies, is that just like Jason Lisle's "polarity- bearing supergranules", the detection of the Higgs is unlikely to be clear cut, but rather dredged up out of a morass of partially conflicting data and then confirmed (with the introduction of more messy noise and need for filtration) in another detector. Hopefully finally reaching the s' = 5 mark. In many ways it will likely follow (or maybe more convoluted) than the detection of the top quark in 1995. Readers may recall that discovery (at Fermilab) trickled out over months in maddening drops, drabs and dribs.

The process of explicating such exotic fare was even conceived by philosopher Immanuel Kant, in his Critique of Pure Reason. On page 463 he writes:

..Reality in space, i.e. matter, is ..something conditioned, whose inner conditions are its parts, and the parts of those parts are the remote conditions, so that there occurs a regressive synthesis, whose absolute totality reason demands, and that cannot occur otherwise than through a complex division, in which the reality of matter disappears either into nothing or else into that which is no longer matter..

It is almost as if he conceived of confirming the basis of all matter (or at least MASS) in the far future. Let us recall here the Higgs is called the "God particle" precisely because: a) it's believed to pervade all space, and b) its interactions with other elementary particles (e.g. quarks, neutrinos) are that confer on them mass. It's also the missing piece of the so-called "Standard Model".

Kant's quotation is of immense interest, because he encapsulates the tortuous detection process, and also sees- by the end- what one really has is none other that a product of statistics, a statistical artifact- on which is conferred actual material reality by virtue of attaining the magic mark of s' = 5.

In a similar fashion experiments in the 1920s, 1930s, starting with the Davisson-Germer experiment, disclosed the rings seen in tiny diffraction patterns (from the heating of Ni crystals) were none other than 'matter' waves or de Broglie waves. By that stage, and that definition, matter had already ceased to be matter and had become something else: waves! Again, validating Immanuel Kant's perceptions embodied in his paragraph.

Should we be satisfied that ultimately most discoveries, such as in the particle domain, arise from a bout with statistics? I believe so. Because it shows that modern discovery isn't merely as simple as direct observation (always affected by biases, conditions, and defects - including of the biological observation system)but also a product of the diligent application of human intelligence, knowledge and .....sometimes tortuous logical effort to separate wheat from chaff.

Would that the religious and dedicated faithers would work as hard in making their claimed insights valid.
Posted by Copernicus at 1:25 PM