Bad News for Atheists: 9 in 10 'Muricans Believe in "God" 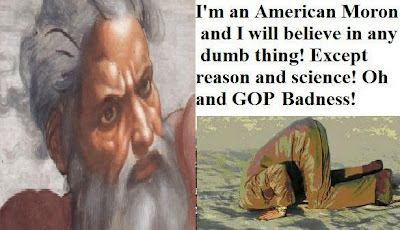 Just when we thought the light of day of reason might be breaking a bit, along comes a recent Gallup Poll taken over last weekend. It shows that more 9 in 10 of our country men remain ensconced in the drivel of irrationality and superstition, probably what explains much of their disconnect with realism, and scientific thinking. (Ninety-two percent of Gallup's 1,018 respondents (hailing from all 50 states) answered "yes" when asked whether they believed in God.)

"Despite the many changes that have rippled through American society over the last 6 ½ decades, belief in God as measured in this direct way has remained high and relatively stable. Gallup initially used this question wording in November 1944, when 96% said "yes." That percentage dropped to 94% in 1947, but increased to 98% in several Gallup surveys conducted in the 1950s and 1960s."

Of course much of this can easily be explained by the fact most godsters are poorly educated or, if they did get to college, they never truly applied the basic thrust of humanist emphasis in most places of higher learning to their lives. If they became scientists some how, they clearly sold out, probably because they found a longer tenure track dispensing bull pockey than sticking with research. But in general, we know the majority of god-fearin' Americans remains poorly educated in history and science, and these go hand in hand with god belief, along with lower economic status. The fact many Americans have few or no government supports to depend upon, means their only last option is to try and curry supernatural favor.

On the bright side, belief in God drops below 90% among younger Americans, liberals, those living in the East, those with postgraduate educations, and political independents. Also, in recent decades, the Gallup pollsters have expanded the survey to also ask the more generic question, "Do you believe in God or a universal spirit?" Thus, it is easy to see many more will come on board with a wider definition. For example, my Eckist sister-in-law believes in a "universal spirit" as does my Spiritual Master friend, John Phillips. (Of course, both were roundly condemned to a Hell cartoon by a certain innominate pastor!) So at least this more elastic definition gives cause for hope.

On the downside, belief in God is nearly universal among Republicans and conservatives and, to a slightly lesser degree, in the South. This ought not surprise us either, because we know the Republicans and conservatives in general are all about destroying people's future security (such as resides in Medicare) so of course they'd be seeking a Pharisaic cover for false piety. Whited Sepulchres anyone?

What about comparison with other advanced nations? The most recent Eurostat Eurobarometer study by the European Commission was conducted in 2005. It found that 52 percent of European Union citizens responded that "they believe there is a God" while 27 percent said "they believe there is some sort of spirit or life force" and 18 percent said that "they do not believe there is a spirit, God, nor life force." (The same European survey showed Turkey and Malta to be the only European countries on par with America's figure of over 90 percent of citizens believing in God).

Again, the significantly lower belief stats for Europe should not be a great surprise given that their nations feature more economically secure populations. Statistics from many sources appear to show the greater the economic security the less the need to appeal to supernatural forces for succor and assistance.

A final consideration, as a recent issue of TIME makes clear, is that Americans have been suckers for false optimism or unrealistic over -optimism since time immemorial. And since the circuits in the brain that wire people for hyper-optimism are pretty well the same ones bearing the "God centers" it might make sense that a people who cultivate so much surreal optimism would also overwhelmingly cultivate belief in a surreal, impossible fiction. Stay tuned!
Posted by Copernicus at 2:40 PM