Why Fundies are the World's Worst Bullies 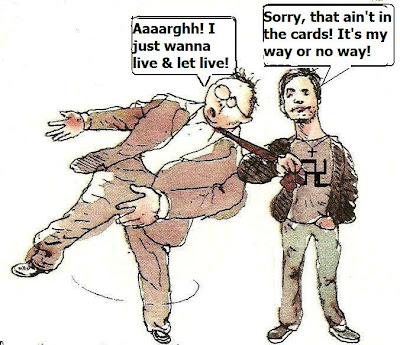 In an issue of SKEPTIC magazine (Vol. 15, No. 2, 2009) from last year, a particular article by Robert Kurtzban and Peter Descioloi caught my attention. The article, entitled ‘Why Religions Turn Oppressive’, explores how and why religions (at least most) turn fascist, based on evolutionary psychology.

The thrust of their article is extremely important, in the context of unbelievers in the world, especially in the god-crazed US of A, because it shows the extent to which we can expect any possibility to live and let live with the other side. Or whether they won't be satisfied until they either convert all of us, or hurl us into ovens and gas chambers (as Joe Conason's fundie interviewees suggested in his 1992 Playboy piece, 'With God as My Co-Pilot'). But wait, that's the shtick of Islam, right? Either kill the Infidel or convert him? (At least according to Howard Bloom writing in his book, The Lucifer Principle.)

Actually not: it applies to all religions of any orthodoxy, but particularly to those which embrace an absolutist meme: that their beliefs are the one and only true ones and everyone else must heel to....or else...

According to the authors of the SKEPTIC piece:

“…religions are like bullies. One feature of bullying is that attacks are often made for no reason, aside from the ease of attacking the target. Such attacks can be used to establish dominance, or at least a reputation as someone to be feared and obeyed. …By forcing obedience in trivial matters – even harmless ones- religious leaders establish a reputation for punishment that allows dominance in more meaningful aspects of life. In this view the content of rules is relatively arbitrary"

This is exactly what we've found in the past four or so of a certain "pastor's" blog as he lashes out at atheists seeking to answer questions that he himself put out for atheists to address.

But from the looks of things- depicting each of his atheist responders as demonic or Satanically-controlled, there isn't the slightest hint of any respect. He uses the posting of their honest answers merely as an excuse to belittle them with his own absurd "rebuttals". He then follows that calumny and belligerence with further blogs trying to "argue" that other religions (the non-bullying type) use TOLERANCE to try to dominate!

Has anyone ever heard or seen such twisted reasoning since the words: 'War is Peace', and 'Freedom is slavery' writ large in Orwell's '1984'? Where each normalized thought is aberrated and transferred into one that is useful for the bullying Big Brother and his Thought Police.

Obviously when one uses such tactics, or the perennial "Hell" threats launched at those of us who espouse unbelief, then one can see the bully hard at work. The Bully, you see, doesn't seek co-existence, that word isn't in his vocabulary, No, he seeks dominance! Living must be on HIS terms, no others. Friendships must be predicated on his biases and fundamentalist preferences, beliefs, memes, chatter, books (mainly the KJV Bible) and no others. He doesn't want to hear about the films you've seen, books you read...not unless they have something to do with his good Book.

His yen for dominance is driven by his absolutism ....and it is the same whether we're talking about a Christian Fundie, an Islamic Fundie, or a Jewish one.

In their perverted world -universe, all thought outside their limited cosmos of precepts and passages is "false". All doctrines other than theirs are "heretic" or demonic. Free thinking is the next thing to cursing or blasphemy.

And don't ever expect a fundie to honestly attempt to answer or address OUR questions, like we do THEIRS! Oh, no! For we are regarded as "fools" to ask THEM questions, and they will excavate all the biblical crudpola they can to show why they must not answer "fools", e.g.

"The fool hath said in his heart, There is no God. They are corrupt, they have done abominable works, there is none that doeth good" ( Psalm 14:1 )

And the justification for proffering such vile offal is usually in terms of swift, sound bite gibberish like this (from the same Pastor's blog).

Although it is, in fact, fundamentalist religions that do that - because they extol the very bullying, genocidal behavior carried out by their anthropomorphic, psychotic god as GOOD.

Some examples of what I'm talking about, and why I wouldn't even trust a pet turtle to a fundie:

"And he went up from then unto Beth-el: and as he was going up by the way, there came forth little children out of the city, and mocked him and said unto him: 'Go up, thou bald head, go up , thou bald head'. And he turned back and looked at them, and cursed them in the name of the LORD.

And there came forth two she-bears out of the wood, and teared up forty and two children of them"

You can find a satirical re-enactment here:

"If a man has a stubborn and rebellious son, who will not obey the voice of his father or the voice of his mother, and - though they chastise him he will not give heed to them, then his father and mother shall take hold of him and bring him out to the elders of his city at the gate of the place where he lives, and they shall say to the elders of the city,'This our son is stubborn and rebellious, he will not obey our voice; he is a glutton and a drunkard. Then all the men of the city shall stone him to death with stones, so you shall purge the evil from your midst"


On examining and considering these examples (which are in no way "misquoted" as the fundies might claim), which is more likely: 1) that a psychotic entity-deity with ten screws loose could actually exist and mete out "justice" as manifested in these stories, or (2) the stories were purely the fabrications of vile, debased minds and cruel hearts? In other words, the mental detritus of inherently evil men masquerading as wise fonts of ineffable wisdom, in order to confer a future basis for bullying to its most regressive descendents. That they may try to enslave the rest of us!

The atheist, meanwhile, must fashion his ethics and morality from human values and intelligence. He can't invoke some insane "good" predicated only on what an insane deity will do. The atheist demands any valid moral or ethical code feature a basis for which acts are ethical or not on their merits and specific valuations, not because a god did or condoned them!

In the evolutionary psychology context, the biggest, baddest religious bullies are the ones that inspire the most fear while they intimidate with physical or other threats. (Note the recent campaign against abortion providers in the South, using 'Wanted for murder by Jesus" posters - that include the name, address and photo of the provider) These are the ones most likely to survive the longest and compete most efficiently with other "bullies". It’s no surprise then that most of these religions employ the myth of 'Hell' to instill obedience, even while they mutually threaten each other with Hell! Thus, do Roman Catholics warn evangelicals that they are destined for Hell's eternal fires even as the evangelicals call this punishment down on RCs for not accepting the Lord JC as personal Savior.

Thus we see that the alleged "moral" mandates of the biggest bully religions (like Christian and Islamic Fundamentalists) are designed as a form of selection to assure their survival in the competition with other religious memes. All their affected morality is actually expeditious in terms of use of physical or psychological force, to control as many docile minds as they can. Still, this doesn’t get to why religious authorities (or even pretend ones) go after non-members who really should pose no threat. Unless their ideas do! Again, the SKEPTIC authors chime in:

"Perhaps the attention paid to suppressing the freedom of non-members is a way to signal the will and capacity to use force. Religions can condemn outsiders to remind followers of the social and physical consequences of disobedience- while avoiding provoking skirmishes within the group”

The authors go on to also point out that the most picked on outsiders are “limited in the ability to retaliate”. Thus, favorite targets of bully evangelicals like James Dobson, Fred Phelps and Pastor Mike are homosexuals and abortion service providers, doctors. It’s like shooting fish in a barrel for them. Atheists are less likely targets, since we’ve become more empowered over the last five years, and will now strike out and hammer anyone who attacks us. We don’t “take it” anymore and will also launch criticisms where we see fit, without waiting to be criticized ourselves. Hence, because we fight back so often and with force, counterpunches, many fundies regard us as "looking for theological fistfights".

In fact, not - all we merely want is respect. But if you don't give it to us by accepting us for who and what we are, we will keep coming back to bash you - like you bash us- over and over again.

Lastly, all atheists need to bear in mind that peaceful co-existence with any bully is impossible on HIS terms. If said bully isn't prepared to compromise, we have no choice but to literally tell them to go to hell - ours, not theirs. And we promise we will fight their yen for control of our lives and minds to the very bitter end- family or no family- we don't care. If you are going to be a bully, we are going to fight back.

Deal with it.
Posted by Copernicus at 3:03 PM