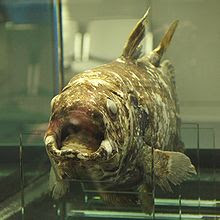 Left: The fish caught off Japanese waters in 1938 and claimed to be a "Coelacanth". In fact, it was not the same species, but rather Latimeria menadoensis. (See text) 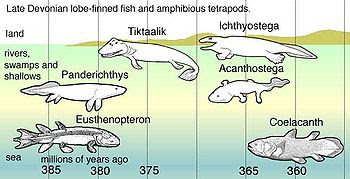 
A recurring theme among backward anti-evolutionists is that Darwin's theory of evolution by natural selection is somehow "missing in action" or accepted when evidence contradicts it. This is typical, especially of the ID-creationist crowd, who have no independent evidence of their own (that stands on tests of falsification) but is rather based on nitpickings to do with perceived "failings" of evolution.

In a recent issue of Integra (the Journal of Intertel), for example, author Delmar Ray Riffe spews dozens of conjectures aimed at trying to show evolutionary theory is wrong, or accepted without basis. It's interesting as an exercise to go through a number of his claims and dispel them one by one, hoping the process serves as a learning basis for other creationists who may be tempted to emulate it. So, let's look at some of Riffe's canards:

(1) Darwin never said where the first cell came from.

This one's a simple non-starter, a 'macguffin' that marshals no negatives against Darwinism! The reason? It isn’t part of Darwinian evolution proper, but rather abiogenesis: the theory of the original inception of life, as opposed to its later evolution by natural selection. The consensus of current research is already fairly clear about the nature or form of the first primitive organisms. They were prokaryotic autotrophs, where a prokaryote has one chromosome only, dispersed in its cytoplasm. An autotroph is an organism that doesn’t depend on others for nutrition.

More specifically, they were suspended colloidal micro-spheres capable of exchanging energy with their surroundings. To get energy, these self-sustaining coacervate droplets could use one or two basic reactions involving adenosine triphosphate (ATP) and adenosine diphosphate (ADP).

In the above, L*M is some large, indeterminate, energy-rich compound that could serve as ‘food’. Whatever the specific form, it’s conceived here to have two major parts capable of being broken to liberate energy.

Compound R is perhaps a protenoid, but in any case able to act on L*M to decompose it. Concurrent with the first reaction is the possibility of a second, entailing autocatalytic molecules designated X*Y. These molecules can accelerate their own formation, using ATP. On the basis of the chemical reactions, the hypothetical coacervate would consist of the combination: X*Y + R.

Now, what properties might we expect for any such primitive life form? They’d include: simple organization, ability to increase in size, and ability to maintain itself over extended intervals. Does the coacervate meet these condition? Well, it has a very simple organization consisting of the molecules X*Y and R. It can increase its size by synthesizing more of X*Y, growing until unstable. Finally, it can maintain itself over indefinite intervals, so long as it can extract the chemical components it needs. What about replication? We expect that this is feasible when it splits into ‘daughters’ after growing too large. Then, so long as each has some of the protenoid R there is the capacity for replication.

A logical question is whether there is anything that can remotely compare to the theoretical construct above. In fact, there is, and it’s called a pleuro-pneumonia like organism or PPLO for short. The PPLO is as close to the theoretical limit of how small an organism can be[1]. Some figures clarify this. It has about 12 million atoms, and a molecular weight of 2.88 million Daltons[2]. Compared to an amoeba, it weighs about one billions times less.

This one is often invoked by crazy creationists to try to show that evolution “messed up” or went awry, given an alleged ancient fish (deemed extinct for tens of millions of years) suddenly shows up alive and well in 1938. Problem is, they get it all wrong from top to bottom, with erroneous assumptions piled onto some early taxonomic errors in classifying the living species.

Before the living specimens were discovered, it was believed by some that the coelacanth was a "missing link" between the fish and the tetrapods. It was often claimed that the coelacanth had “remained unchanged for millions of years”; but, in fact, the living species and genus were unknown from the fossil record. The most likely reason for the gap is the original taxonomy becoming extinct in shallow waters only. Deep-water fossils, however, are only rarely lifted to levels where paleontologists can recover them, making most deep-water taxa disappear from the fossil record.

Again, we have the sad spectacle of too eager-beaver creationists seizing on poorly constructed speciation catalogs, or wrong taxonomic assumptions – to make specious cases. In this case, conflating the ancient –prehistorical coelacanth with the modern living species, the Latimeria menadoensis, caught off Japan ca. 1938. Thus the absurd question posed by some (like Riffe) as to “How can such a creature be found alive in 1938 when supposedly dead for 80 million years?” is easily answered: Because we are looking at TWO different species of fish, from two differing sea water levels!!

This one is technically correct, but factually wrong. Let me explain.

The problem is that Darwin didn’t logically make all the necessary connections that his observations disclosed at the time he made them during his Beagle sojourn to the Galapagos. Indeed, Darwin was so initially imbued with the creationist perspective that he failed to collect one single species of giant tortoise present in the islands. Fortunately, the occurrence of other species - and their recording- ultimately held away with the assistance of a consummate taxonomic researcher: John Gould - an ornithological expert at the London Zoological Society.

Indeed, had Darwin already been privy to natural selection, and how adaptations operate within its purview, he'd have easily seen that the variety of beaks displayed among the finches he found was directly traceable to the sort of foods they ate, in the respective islands. In point of fact, four of the fourteen finch species fed on seeds (as finches generally do), and another two species consumed fruits, flesh and flowers of cacti. Seven other finch species were primarily insectivorous, while one fed exclusively on leaves. Thus, from his creationist disadvantage point, it wasn't surprising that Darwin was fooled to the extent of believing some of the birds weren't finches at all.

According to Frank J. Sulloway, in his essay, ‘Why Darwin Rejected Intelligent Design’:

“Faced with an absence of critical information to resolve the finches issue, Darwin continued to give a nod to the prevailing creationist assumption that variation within immutable species can lead to new varieties or subspecies that are adapted to local environments”

However, Darwin's pserspective was subsequently rescued by his good friend, John Gould . Sulloway (ibid.) notes that:

“Darwin returned to England, on October 2, 1836. Three months later, he deposited his Beagle collections of birds with John Gould, the ornithological expert at the London Zoological society.”

THIS was the key breakthrough step since it was none other than Gould who “immediately realized the extraordinary nature of Darwin’s Galapagos specimens and analyzed and described them first”. In other words, it was John Gould who showed Darwin that he'd had the direct evidence for evolution via natural selection in his hands all the time. He just didn't recognize it!

Based on Gould’s analysis, contained in a full report he published March 1837, Darwin was finally informed that 3 of his 4 mockingbird species were distinct - new to science - and different from all other known mockingbirds. It was at that juncture Darwin found himself confronted by the problem of the origin of species that escaped him while actually in the Galapagos, imbued with his creationist mentality. And it was at this stage of discovery that the putative basis for his great work 'The Origin of Species' was forged.

Of course, it was no exaggeration to say Darwin was stunned by Gould's results. Indeed, if Gould was correct about the mockingbirds it meant that the supposed "barrier" between species had been broken by these birds on a set of isolated islands. Thus, gradual evolution through geographic isolation was the only plausible explanation that fit with the observational record (clarified by Gould, an expert ornithologist).

Fortunately for us all (now), as Darwin then came to examine more of his Beagle records from his new viewpoint, he realized he'd been blinded by the creationist codswallop. After reading Thomas Malthus' An Essay on the Principle of Population, Darwin realized that in the ongoing struggle for scarce resources, slight variations of beneficial nature would tend to be naturally selected - leading to increased survival and hence increase in adaptive traits.Thus, a finch peculiar to one island lacking in fruits, or other normal finch fare, could survive if it simply increased its adaptive repertoire, say by eating insects instead.

Again, we suggest to readers that the best strategy is to actually read Darwin's Origin of Species, to see first hand how much his viewpoint had changed and how (in his marvellous book) he was able to document visually the first hand evidence of natural selection - after being set straight by John Gould.

The best version of his book to get, therefore, is the one that is illustrated. Don't wait for it to appear on "Kindle" as it likely never will. None of the electronic book reading device manufacturers are going to have books older than about 40 years placed into their archives anytime soon! Get Darwin's book now, get it as a REAL book, and enjoy it as you read it late into the night.

[1] Viruses are smaller, of course, but they’re not regarded as free living organisms. That is, they require a host in order to live, replicate.
[2] One Dalton: roughly the mass-weight of a hydrogen atom or 1.66 x 10^-27 kg.
Posted by Copernicus at 12:42 PM