Are the Repukes Totally Nuts? 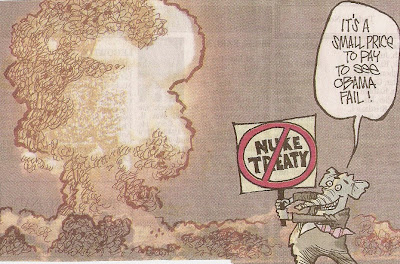 One must ask this as we behold this degenerate party attempting to block ratification of the START treaty, thereby leaving the U.S. open to a massive undermining of its nuclear security . And THIS is the party that professes to be all about "national security"! Well, I guess it just shows they don't really mean it, but merely invoke that buzzword when it's convenient to do so for their own political gain - and damned the national welfare.

START - for Strategic Arms Reduction Treaty- originated when the Union of Sovet Socialist Republics still existed. The initial signing occurred on July 31, 1991, and the enforcement provisions were brought to bear by December 5, 1994. (Interestingly, this was barely one year before an incident in which Russian nuclear missiles were suddenly put on alert for possible counterstrike at the U.S., when they evidently detected a 'bogey' bearing down on them and believed to be a U.S. missile. It turned out to be the full Moon. And thanks to certain START protections in effect, a global catastrophe was averted by about 30 minutes)

Technically, START has two parts, I and II. That which was signed in 1991 has become known as "START I". It's basic thrust has been to limit the total number of nuclear warheads, to 6,000, not counting an additional 1,600 allocated to submarines and bombers. For anyone unable to process this magnitude, given the limitation applies to a total of 15,200 warheads or bombs on both sides- it is enough to blow up the world about four times over. Thus, given the dicey Russian episode ca. 1995, it is more than in our best interests to seek the continuance of warhead limitations as manifest in START II. (START I expired on Dec. 5, 2009).

START II (to implement continued control of the respective nuclear arsenals, as well as to provide for site inspections) was signed on April 8, 2010 by President Obama and Russian President Medvedev. Unfortunately, as critical as this second part treaty is, it can't be enforced until ratified by the Russian parliament and U.S. congress.

While the Russians appear to be heading for approval, START II is now bogged down in the U.S. because of Republican intransigency- determined to use this critical treaty as yet another means to exact a political victory over Obama by refusing him success for getting it passed. Never mind that this treaty is in our national interests, the GOP doesn't care - all they worry about is their own political interests.

Even GOP stalwarts such as George Schulz and Sen. Richard Lugar have tried to call this off the rails party to account, and appeal to the better angels of Sen. John Kyl (AZ) but with little success. Kyl and his cohort, intimidated by the Tea Party nation, are in no mood to give anything to Obama, even in the interests of national security.

What this means, as Sen. Lugar pointed out, is we have no means of actually observing Russian compliance with the treaty. Indeed, there's every indication that if the Repukes' folly continues, the Russians will go on a renewed missile, warhead -building jag, spurred on by NATO's determination to build anti-missile sites near the Russian border.

We can only hope that eventually sense and wiser judgment prevails, but in today's Tea Party-dominated political climate that commodity appears to be in short supply! Will any repubs at all actually act in the national interest, as opposed to their own political interest? That remains to be seen, but personally I wouldn't hold my breath or make any bets on it in Vegas!
Posted by Copernicus at 8:48 AM