Kudos to ‘The Human Ape’! But Beware! 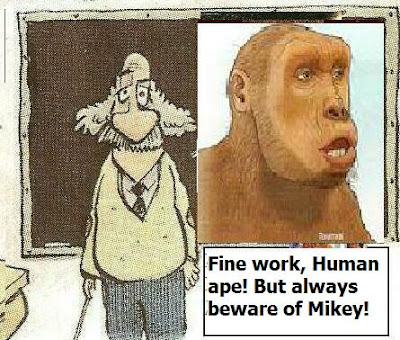 It is extremely gratifying to see yet another atheist and evolutionist attempting to educate a certain intransigent and obtuse “pastor” as to the basics of evolution. Seeing his answers to Mikey’s recent questions discloses the input of someone who’s actually worked in the field, and why Mikey ought to take it to heart.

But will he? Don’t hold your breath! We must recall here the old saying about "casting pearls before swine". (Not that Mikey is a literal swine, but rather ignorant like one- say your average brain-jacked Repub).

‘Human Ape’ needs to be appraised of several items concerning my pastor brother:

1) Though he will indeed post your responses, it's merely to use them as a "tackling dummy". Thus, he'll twist or distort them at will via his own irrational addenda - and by the time he gets done, the average reader won’t know which end is up. He’ll obfuscate everything with his religious craziness and claptrap.

And if you answer one of his rigged questions, then complain it’s unfair, he’ll merely mock you, e.g.

“You state in your very first sentence , "Since nobody can live millions of years, that's not a fair question." Oh , boo-hoo-hoo . Not a "FAIR" question? Gimme a break . ( But hey , maybe you can join the 'pity-pool' club with "Caleb" and ask "Phil,the atheist to help you out,huh? But be sure to "ask NICELY" ) .”

Of course, we can easily turn the tables on him by asking him:

Were YOU actually around in 33 A.D? Did YOU personally SEE Christ walk on water, raise the dead, cast out devils, get crucified and rise again?

But then you see, the rules he applies to others he’ll never apply to himself, he will merely quote chapter and verse of his KJV as if that’s a substitute for his being there!

3) It is impossible to educate him because, like a cult member, his mind’s already co-opted by his bible. If it isn’t in there, he’s not going to accept it. Case closed.

Human Ape’s honest effort to educate Pastor Mikey is seen in this part of his answer:

“I could spend the rest of this week explaining some of this evidence, but I suggest instead you could stop being lazy and stop being afraid, and study this evidence yourself without me holding your hand.Here's a good place to start:The Making of the Fittest: DNA and the Ultimate Forensic Record of Evolution by Sean B. Carroll.”


The trouble is Mikey has no intention whatever to stop being lazy. Being content that all truth, all knowledge resides in his bible, where would any motivation come from to seek outside sources? (Unless, as we've seen, it’s to lift passages from some specious source via Google to attack recognized science. Say copping any crappola put out by the Discovery Institute, or the Creation "Science" Institute).

We see this obduracy when he writes in response to Human Ape’s sound advice:

“Anyway , since you concede (and I agree ) , that "nobody can live millions of years," then all the evolution 'hocus pocus' is nothing more than a "theory." MACRO-evolution has never - and will NEVER be witnessed by ANYONE ( unlike the miracles of Jesus , and others ) that WERE witnessed ; even by Jesus' ENEMIES ! Yet even His enemies never denied them ! They only attributed them to the work of "devils" or "demons." Science is NOT "proof" of diddly-squat !"

Note here that in the first line he isn’t even vaguely aware what a theory is! He thinks it’s the same as speculation, when in actual fact it’s the highest refinement and reinforcement of a hypothesis – one that has actually had its predictions validated, confirmed! He also isn’t aware that though one doesn’t behold direct evidence for macroevolution (because of the time scales for change) we can obtain indirect evidence for it!

They also found that chromosome ‘17’ in the chimp differs from that in the human by only a pericentric inversion. In addition, they found evidence in their study that the human chromosome ‘2’ was the result of the telomeric fusion of the two ape chromosomes designated ‘2p’ and ‘2q’, which would also account for the dimunition of chromosome pairs (from 24 to 23) as one goes from the apes to humans. And then there's the powerful macroevolutionary evidence for common descent in the fact that the cytochrome-c protein sequence is identical in apes and humans!
But all of this will sail serenely over the head of a guy who’s never taken a basic course in genetics, far less biology – and still refuses to take a basic test on evolution to show he’s even qualified to be asking questions on it.

Note also, again, how he changes the context dishonestly in his response! Instead of admitting that no, HE likewise has never seen Jesus do miracles, so can't honestly attest to their reality - he invokes claimed “witnesses” who observed them. But that ISN’T the same as the response to asking (point blank) if YOU have actually seen ….whatever.. THEN. In other words, he changes the response basis to suit his own agenda. For him it's perfectly allowed to invoke distant (in time) putative witnesses to assorted biblical claims, but we must actually have been current witnesses of macroevolution.

Logically, if we accept his “witnesses” (whether they were ‘enemies’ or not is immaterial to the point) he must accept ours for macroevolution in the indirect sense! (E.g. the researchers Yunis and Prakash who published their findings on chimp and human chromosomes). He can’t logically demand WE must actually have witnessed x, y or z for ourselves, then excuse himself from the same demands. But we see this is a constant tactic of choice, because he simply doesn't want to engage in any fair way, being a bully at heart.

Note also his last sentence, the sign of a true scientific illiterate: “Science is not proof of diddly squat”.

We see he has no remote idea of proof, no conception of science, or indeed, how different sciences vary in their thresholds for evidence and criteria. (Thus, climate science has lower thresholds than celestial mechanics). He’s even oblivious to the fact of Men having landed on the Moon proving beyond a doubt the validity of one branch of science: celestial mechanics (which deals with predicting the future positions of planets, the Moon etc. Hence, if the future position of the Moon could not have been accurately computed for July 20, 1969 humans could not have landed there on that date. But again, he’s not intelligent enough to process this!)

All of this shows clearly that it’s a colossal waste of time to engage him on any level. He doesn’t even speak in our language as evidenced by his laughable catechresis of “proof”:

“Proofs have two features that do not exist in science: They are final, and they are binary. Once a theorem is proven, it will forever be true and there will be nothing in the future that will threaten its status as a proven theorem (unless a flaw is discovered in the proof”

Final and 'binary" my ass! He confuses mathematical proof with scientific! As anyone who's ever done scientific research knows, it's quite impossible to "prove" a particular solution to a scientific problem to be "true" (that is, true for all times and conditions). Solutions of scientific problems are instead assessed for adequacy, that is, in respect to the extent to which the researcher's stated aims have been carried out.

Two categories of criteria are those related to argument and to the evidence presented. To judge adequacy then, we look for the strength and consistency of logical/mathematical arguments, and the goodness of fit of the data in a given context. By "goodness of fit" I mean that two different datasets on comparison are either strongly correlated or anti-correlated. As an example, the rate of growth of tree rings is strongly correlated to the level of activity of a particular sunspot cycle. There is agreement and an excellent "goodness of fit".

All such determinations of adequacy perform the same function for scientific research that quality control does for industry. Most importantly, no determination of adequacy can be rendered until and unless the research is published in a refereed journal. If I am asked to invest mental and emotional energy in some extraordinary (e.g. “supernatural”) claim or other, then what exactly are the rational criteria of adequacy by which I can judge that claim?

Can it be set against original and actual scientific hypotheses? Can it admit the basis of numerous empirical tests- and moreover- can it be susceptible to any form of prediction?

If the answer is ‘No’, then we cannot place it into any scientific context! Of course, different theories of science represent different levels of abstraction: quantum theory is at a higher level than general relativity, and general relativity is at a higher level than Newton's theory of gravitation. But-- and here is the key point-- the limits of validity for each theory are ultimately founded in measurements, specifically through careful experiments carried out to test predictions.

It is this testing of reality which provides a coherent basis for scientific claims, and which bestows on science a legitimacy founded in reality rather than wish fulfillment fantasies. This is a basis, moreover, for which theological claims have no counterpart, despite that fact that theologians have often tried to make their claims sound like proven theories.

Why do we trust science, even over mathematical proofs? Because it is the only entity that enables and provides a self-correct real world process. A process that is able to find, examine and correct any errors. This is because science gives us an approach to objective truth by way of successive approximations, a concept that is totally alien to most religionists. It works like this: You have data, and accessory information which leads to some initial result which tests a particular hypothesis- call it 'x'. (E.g. the Sun is a yellow dwarf star)

where x(n +1) denotes an improvement via iteration, with P(x) the process (acting on x) that allows it. (E.g. P(x) is a photometric spectrometer which shows the Sun's maximum radiation output follows a blackbody (Planckian) curve and is near 5,500 F. (Peak of the yellow part of the electromagnetic spectrum)

(e.g. superior spectrometer readings in other regions of the spectra confirm the solar output bank is limited)

and so on, and so on and so forth. Each x, x(n+1), x(n+2) etc. being a successive approximation to what the objective, genuine value should be.

Religions - by contrast- simply impose their truth ab initio by fiat or decree. There is no attempt whatever to incorporate any approximation. Or to even acknowledge that 'truth' can't be accessed all at once. Rather, one must set rational truth aside and succumb to ‘faith”.

This is why Mikey the Pastor will never, ever speak our language or process our arguments - far less accept them- and why it's a waste of time for Caleb, Human Ape or anyone else to try to bring him enlightenment.

He is perfectly content to reside in his deluded, Medieval, Kingdom of Darkness.
Posted by Copernicus at 9:21 AM