The Money-Grubbing Demons: Will you be a victim? 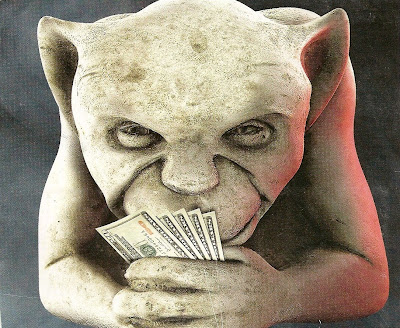 Despite a nation still in the throes of an economic morass, money-grubbing "demons" stalk the highways and byways ready to part gullible (or overly greedy) people from their hard-earned money at the drop of a hat. No, we aren't talking of gambling here, though to be sure - even remotely accepting some of these demons at their word is gambling with your future financial security. So, just as we earlier went through the hierarchy of the fictitious demons of "Hell" it now pays to examine each of the money grubbing variety:

These are exemplfied and embodied in Bernard Madoff who parlayed popular gullibility to a new high. He actually enticed many thousands of (fundamentally) greedy people to believe they could earn up to 11% through his investments in a down market. Eager to beat the existing indexes, they willingly entrusted their money to this demon, hoping to get back at least 8-11% more than they put in, despite the fact that a cursory glance at the numbers would show them this was pie in the sky.

But they bit, and now many of them are out all of their retirement savings. Should we have empathy for them? Of course, but only up to a point! At the end of the day people really DO need to ask themselves if something sounds too good to be true. And if so, avoid it. Recall Ben Franklin's old maxim: "A fool and his money are soon parted!"

But in this case, perhaps underlying greed made them fools. Recall again the old Bajan tale of the mouse whose greed got the better of him. The mouse spotted two morsels of cheese: one nearly his size but enmeshed in a trap. The other merely a crumb - enough for maybe one meal- which had dropped off near the trap and was easy to get with zero risk. But the mouse decided he preferred the bigger prize, and believed he could snatch it without penalty. So he slowly crept up and raised one tiny hand to drag the giant piece of cheese off its trap perch....almost....almost...a little bit more.....WHAM!

These demons were more popular in the 80s and 90s and were the basis of the famous film, Wall Street. The basic idea is that certain people get privy to certain deals being made which can affect stock share price, and they then either dump or buy the shares to make money. (Often later dumping them after the buy in).

Sad to say, these demons are still lurking around as related in a story appearing in today's Wall Street Journal. Evidently, Federal Bureau of Investigation agents raided the Connecticut offices of hedge funds Diamondback Capital Management and Level Global Investors amid a far-reaching insider-trading investigation.

These demons are dangerous because they're now nearly ubiqitous. "Flash trading” exists where high speed computers use special algorithms to detect large buy and sell orders to rapidly adjust their trades, volumes. Since the high speed computers can then act in nanoseconds to either buy or sell with the flash information, they inevitably get the better of the more conventional (slower) investors who use phones or computers. (More than a million flash trades can be done before you can call a regular broker to sell your XYZ shares)

Let’s look at one example. Say a flash trade system or firm is using its high frequency computer - algorithm combo and detects a large buy order for a stock listed initially at $20 a share. Then the flash trade firm will immediately begin scarfing up the stock – driving up the share price – say to $25 or $30 a share or more. The large conventional (institutional) investors then buy it at that price, and the flash firm makes a killing.

Usually the institutional investors are those who manage 401ks, for example, which means the little guy 401k owner ends up paying more in this case. (In another case, a mass flash trader selloff may see the little guy’s fund share value plummet). Bear in mind here 401ks are typically invested in mutual funds comprised of a body of stocks, maybe ten or so. The flash traders’ capability with their high speed system is such that it can control the numbers for all the stocks of a particular fund, though true, there are some funds (e.g. Vanguard Group) which offset some of the effects by systematically lowering trading costs. This is often done by narrowing the spread between what investors pay to buy and sell shares.

Other funds don’t fare as well since the flash traders’ systems “front run” them. Thus, a stock’s orders (or many stocks in a fund) get “picked off” by the flash traders’ computers that detect the orders, then adjust to benefit. Not surprisingly, large institutional investors and consortiums are now trying to fight back with anti-gaming methods

We have all been informed that these money -sucking demons are at bay, but I would believe it about as much as I'd believe Pastor Mike is ready to renounce his evangelicalism to become a Buddhist. Janus Worldwide fund was majorly involved in market timing shenanigans in the early 2000s and I actually received a an invitation to participate in a class action suit to pursue them. (I declined since I exited the fund in late 1998, well before the issues came up).

In market timing large institutional investors (like major funds) try to time the market with special algorithms to sell before a specific threshold. The problem is that little guy investors usually are the ones caught in the transaction. Readers can learn more about it in the book, License To Steal: The Secret World of Wall Street Brokers and the Systematic Plundering of the American Investor.

These characters are unfortunately, a dime a dozen. Their usual shtick is to come around - often through a friend, neighbor or family connection - and promise you the sea, the earth and the sky if you just part with a bit of money to invest in this hot, new "once in a lifetime" deal (that may vanish tomorrow!).....for whatever. Might be real estate, maybe it's some new product or a new innovative company that needs capital, or some other gimmick. The sharp person who's studied finance even a little can generally spot them from a mile away, and like all con-men (who prefer to get their money by not having to work for it) they're always exposed by the come-on.

The issue here, even if you're not a finance maven, is to at least learn about what your getting into before you hand over one buck. Ask for a prospectus (if an investment) or detailed land surveys (if real estate) and also information on the person controlling or managing the deal. Google him or her and find out as much as you can. Recall the law of avoiding Murphy's potential snares: "The less information found or available on a prospective offering the less confidence one must have in it!"

I don't care what the deal is, real estate, stock, or whatever. If there's zero or next to nil information, it's not worth lickspittle.

Finally, if you lack enough self-confidence and are shaky on financials, seek out a financial advisor if all else appears to pan out.

Whatever you do, don't be one to repent at leisure when the "demons" are about to laugh all the way to the bank...with your money!
Posted by Copernicus at 10:49 AM