What's 'Thanksgiving' to an Atheist? 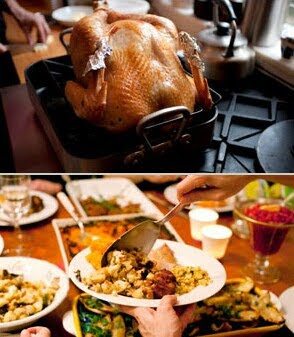 Well, it IS a special day! Let us bear in mind that atheists don't fall under one single uniform pool or mindset, as some fundies like to portray us. As such, atheists will respond to a day like today in almost as many ways as there are atheists. Let's look at some:

1) For the strong (explicit) atheist, this is just another day, although likely served up with more food, bigger helpings.

2) For the weak (implicit) atheist, there'll likely be a subdued thanks to his fellow atheists for support in trying times, keeping up correspondence, and especially helping him get into the hair of certain pastors!

3) For the immaterialist atheist, there'll likely be a hearty 'thanks' to the cosmos, for engendering his or her consciousness via cosmic evolution.

4) For the spiritualist or even agnostic atheist, there'll be an unspoken thought endorsing the universal energy surrounding and binding us all, and hopefully impelling us to do better.

What do any or all have in common? Well, the acknowledgement that this is emphatically not "a Christian nation" as the fundies would like to brainwash their minions and other 'Muricans into believing!

How did the claptrap of a nation “under God” ever get started? Most historians point to the alterations in the original words of the pledge of allegiance (composed in 1892 by Socialist minister Francis Bellamy), rendered by a pathetic, fraidy cat insecure U.S. congress ca. 1954 because it was petrified of not being exclusive enough in the club of nations. The big, bad Soviet commies had scared them to a tee.

The original pledge by Bellamy never used or had the words “Under God”. As a young student at St. Leo’s School in 1952 Milwaukee, the words we used when we recited the pledge were:

“I pledge allegiance to the flag of the United States of America, and to the republic for which it stands; one nation indivisible with liberty and justice for all."

There was no “under God” in the words. But two years later, hysteria reigned as the despicable McCarthy hearings heated up (Sen. Joseph McCarthy from Wisconsin, under the aegis of his “House UnAmerican Activities Committee"- made his name by conducting an inquisition of military, actors, decent citizens, political leaders….in order to discern who was a “real American” and who was a commie or commie symp). The whole McCarthy circus was an outgrowth of the unthinking political fear, demagoguery and hysteria at the time, which had otherwise sober people looking for ‘Reds under the Bed’.

In this ratty (rat out your neighbor or teacher or parent) environment, the alteration of the words in the Pledge to include “under God” was inevitable. Since it was widely accepted that only the absolute “godless” could ever be commies, then the thinking in the retarded congress was that, "Hey, if we include the words ‘nation under God’ we’ll automatically distinguish the United States from all the godless nations. And we will be above them too!”. Add to this the instigation of the Knights of Columbus (which had begun using the changed pledge on its own from 1951 and campaigning for it) and all the pieces were in place to deform Bellamy’s words.

And so, the ad hoc, mutated words were signed into law on Flag Day, June 14, 1954. Thereby, a sinister collusion of religious malcontents and wacko "commie" (e.g. godless) haters, had officially begun a perverted path toward a de facto theocracy, trampling the Establishment Clause and rights of unbelievers in the sordid process. This reached its apotheosis with the Supreme Court’s recent cross ruling (see earlier blog) but even before that saw an even more outrageous manifestation when Bush Senior (now believed to have been the key CIA station chief at the time JFK was assassinated in Dallas) said in a 1988 campaign stop in Chicago:

"I don't know that atheists should be considered as citizens, nor should they be considered patriots. This is one nation under God."

Of course, the man demonstrated himself to be a total idiot and fascist to boot. Atheists are every bit as much citizens as any Christian, since this isn’t a theocracy and citizenship isn’t contingent on god belief. (No new citizen for example, is required to take an oath to God or even swear on a bible that he or she will believe in god to accept American citizenship) Bush therefore was way out on a limb and his thinking as distorted and misbegotten as other things he said while president. (Oh, and let’s not forget his “godly” Christian use of the racist, “Willie Horton” ads to attack Dem candidate Mike Dukakis in the same ’88 campaign. )

As I already showed also in previous blogs, the “God” the Founders invoked was not a theist God but a DEIST one. This is an important distinction, never mind people like a certain FLA pastor like to conflate the two in order to make a specious case. A case predicated on citing state constitutions which have no heft on the level of the federal constitution (which only recognized a Deist “Creator” or God).

The states’ constitutions, no matter how many times they cite a nebulous “God” or “Supreme powers”, have no mandated and specific rights. Thus, as Prof. Gary Wills notes ('A Necessary Evil: A History Of American Distrust Of Government', Simon & Schuster, 1999, p. 108) there's no such entity as “states’ rights). Only citizens can have rights, under the Bill of Rights, and since atheists meet every real criterion for citizenship (under the U.S. Constitution) their rights trump the artificial “powers” and prerogatives of the states. Thus, no state can ever ban an atheist from exercising his or her franchise based on “godlessness”. (For this same reason, states can’t impede or remove a citizens’ unenumerated rights under Amendment IX of the Bill of Rights).

As Alexander Hamilton first observed, governments have prerogatives, people have rights - so Hamilton referenced "abridgments of prerogative" in the state to protect rights of citizens. In other words NO state could exercise any prerogative to rescind a right already granted citizens under the U.S. Constitution.

In order for states to be able to deny atheists (or Jews, or Buddhists or any other minority) voting rights, then, they would have to be able to withhold all the Bill of Rights in the particular state. Since states’ exercise only powers and prerogatives – no rights- this could only be feasible if they secede from the federal system. In that case, their dubious constitutions would take the place of the federal one with its Bill of Rights.

For those interested in learning, that the U.S. is NOT a "Christian nation" was formalized in a declaration as part of the Treaty of Tripoli. sent to the floor of the Senate, June 7, 1797:

Art. 11. "As the Government of the United States of America is not, in any sense, founded on the Christian religion; as it has in itself no character of enmity against the laws, religion, or tranquillity, of Mussulmen; and, as the said States never entered into any war, or act of hostility against any Mahometan nation, it is declared by the parties, that no pretext arising from religious opinions, shall ever produce an interruption of the harmony existing between the two countries."


This is something the Christians inhabiting this land would do well to bear in mind today, as they prepare to gorge on their turkeys, apple cobblers, pumpkin pie or whatever.
Posted by Copernicus at 11:06 AM