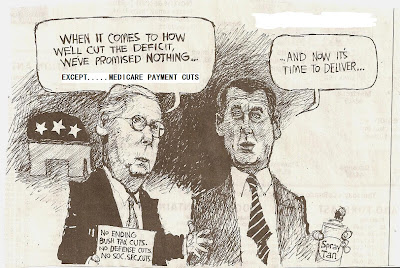 As we approach December 1st, many would-be Medicare beneficiaries are beset with trepidation. Thanks to an idiotic "budget balancing" law in the 1990s, Congress will be required to slash payments to Medicare physicians by 23%. If that is done, 99% of prospective physicians will take no new patients. So the supposed Medicare benefit will be worthless to millions. As one breast cancer surgeon in San Antonio put it, she's "exhausted with these annual and bi-annual threats to cut reimbursement" and may simply take no more Medicare patients, period.

Who can blame her or any other physicians, for whom Medicare reimbursement is already 40-50% less than they receive from private imsurance patients?

These potential cuts emanate from a failed system set up years ago to try to rein in costs, but have raised alarms to real ongoing damage to Medicare unless something is done besides yearly or bi-yearly "fixes". (The last occurred in June, and was resolved after both sides, Ds and Rs, agreed to come up with cuts elsewhere). But Medicare's survival and use for millions shouldn't have to depend on draconian cuts elsewhere.

As far as these yearly scuffles, it's claimed (by the corporo-media) that neither Dems nor Repubs "want the sudden cuts, but there's no consensus on how to stave them off". The fictious debate over "high deficits" complicates the issue because it is claimed every cent going to Medicare doctors will probably have to come from cuts elsewhere.

Well, not necessarily! What I will propose here is a solution two-fer: one that eliminates having to go through this yearly three-card Monte playing with seniors' lives, and which also eliminates the need to keep cutting other programs that are needed.

The basis of my solution is elementary. We know from CBO and other data that fully repealing the bogus Medicare cost reduction formula from the 1990s law will cost more than $280 billion over ten years. Where to get the money to afford it?

Simply allow ALL the Bush tax cuts for the wealthiest to expire one time! Over ten years, based on CBO estimates, those cuts would generate $700 billion in extra cost, added deficit. If allowed to expire, that money would pay for nearly twenty years of relief for Medicare beneficiaries and physicians - who'd no longer have to feverishly consult the news every 6 months to see if they still have a benefit.

It is rational, as well the fair and just thing to do. Let's face it, the wealthiest do not need all that extra money (nearly $113,000 a year on average) and they sure as hell aren't going to use it to create jobs. That's the biggest pile of BS since Bernard Madoff told his gullible marks their investments were earning 11% a year in a totally down market.

As The Weekend Financial Times reported today in its Luxury Section, the wealthiest are now splurging on new cars (Rolls Royces and Mercedes Benz novelty custom cars) as well as high end jewelry, e.g. big diamonds, ruby and 100-ct diamond- laced watches, diamond and sapphire necklaces, etc. Do we really want to give these bloated pompous punks more $$$ to waste, instead of assisting seniors who were promised a Medicare benefit, not a hollow one?

But a hollow one is what they will keep being threatend with, unless this nonsense is resolved once and for all.

Wake up, Dems! Vote down the Bush tax cuts for the wealthiest, and apply that money to removing this horrific, misbegotten "formula" that threatens the elderly each year. Do your damned jobs for once, and don't be intimidated by the repups. Take off your red tutus, as Michael Moore suggested last night on Bill Maher's Real Time, and put on your damned boxing gloves.

What are you, men or mice?

Champions of the People, or Caspar Milquetoasts? Millions will be watching to decide which. And if you turn out to be retaining those tutus, and dancing daintily to the Repukes' tune, don't look for any further support from your base.
Posted by Copernicus at 9:09 AM