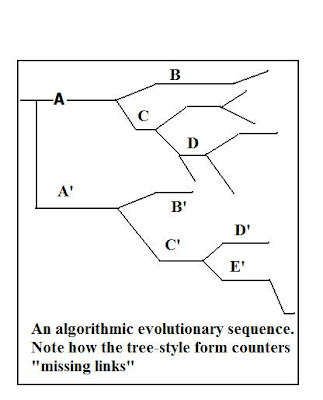 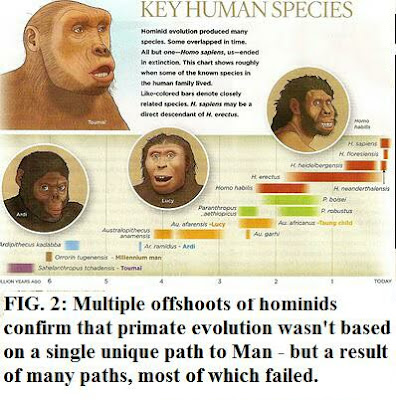 We continue now with one more howler to do with evolution, focusing here on the malarkey to do with "missing links". While technically not a howler-howler, i.e. on the level of those already described (previous blog), the use of the term "missing link" has exposed Darwinian evolution to a host of specious criticisms from the religious wackos and creationist crazies - who somehow believe they know the theory more intimately than bona fide Darwinians! At the same time, I believe it has retarded a fuller understanding of what evolution is actually about.

Look back the past twenty years through any media archives, say The New York Times or The London Telegraph or The Barbados Advocate, and you are likely to see at least 15-20 headlines with references to "missing links" - in terms of discoveries to do with evolution. Indeed, two of the most recent were: (1)the report from the April 3, 2010 London Telegraph on the discovery of an almost-complete fossilized skeleton belonging to a previously-unknown type of early human ancestor that may have been a intermediate stage as ape-men evolved into the first species of advanced humans, Homo habilis, and (2) the May, 2009 report (in numerous papers) of a lemur fossil dubbed "Ida' described as "the first link to all humans," and "the closest thing we can get to a direct ancestor".


Big but.... What IF another fossil is then discovered predating Ida by even a couple million years, then what?

The problem is the whole template vastly oversimplifies the nature of fossil finds, as well as the biological importance and meaning. In a way, the use of the term "missing link" in any context, is simply a copout by either scientists or media to try to simplify a complex notion for people who may never even have taken a single high school biology course. (As in most Americans).

Who can blame them? When I attended a conference in Fairbanks, Alaska in January, 1986, on the role of the Media in Science, I was appalled at the lengths of simplification of ideas resorted to, as told by a former NPR reporter. Across the whole spectrum from astronomy to physics, to biology, vast complex ideas were reduced to cartoons or caricatures simply for the consumption of would -be readers. Thus, as the NPR reporter also noted, was the term "missing link" also invoked by science reporters- starting with Richard Leakey's finds in the 70s- to transmit in a concise form complex evolutionary ideas.

Problem is it doesn't work! Let me show why: take the line below to denote a path of evolutionary development for some species, with the time increasing to the right:

In this simplified format, an original species - say a root -eating shrew at (A), evolves over time to become a leaf -eating shrew at (C) (with different taxonomic adaptations). The time differential is maybe twenty million years. In this linear unfolding or sequence of a linear development, it makes eminent sense to look for a "missing link" (B), say somewhere in between. Maybe this is a shrew that eats roots, but is also developing a taste for large leaves.

Now, mentally, the word "link" evokes an image of a chain, i.e. a chain typically has links and the more links the longer the chain. A "missing link" therefore refers to one piece or link missing in the putative long, linear chain. In the context shown, therefore, identifying (B) as a "missing link" makes eminent sense. However, in real world evolution of species, it doesn't.

To grasp this, consult the diagram above which displays the realistic algorithmic development of two hominid families, called A and A' - initially. Note here the primary differentiating characteristic is not a uniform linking in a linear sequence, but rather a TREE-like branching. The tree-like branching fits the evidence we have that while a 'shoot' of the evolutionary lineage starts off, it often quickly hits a dead end, then stops. Others continue to develop before they branch off...or don't.

In this case, the use of the term "missing link" is totally inappropriate since it skews perceptions of what is really happening in evolution. Thereby, people are led to believe or think of evolution as a simple linear unfolding process rather than a complex path of branching trees, at differing times. They then question the concept of some "missing link" when either multiple ones are found (or claimed to be) or expected finds don't materialize within the sequence. In either case, the wrong expectations are used to attempt to fault evolution, when the real problem is that an oversimplistic template is being employed which skews perceptions and judgment.

Here's where it stands in terms of hominid evolution: As of this writing more than 240 hominid individuals have been found and classified, one of the most recent being Ardipithecus kadabba or 'Ardi' as noted in a previous blog. The research that went into the composition of Ardi's fossil structure took nearly 15 years before it could be published. Even before that extensive pre-publication preparation, diligent work at the particular digs had to be completed. Even with dozens of fossils excavated the work wasn't finished, since CT scanners then had to be used on them and advanced computer imaging employed to digitally restore the crushed skull. The good news is that the effort was worth it. In the words of one Ardi worker:

So, much for the fundie classic simpleton belief or assumption that one just walks out into a closed canopy or escarpment and pulls out complete fossils at will, as if the dynamic Earth itself would cooperate with this. No freaking way. The brute fact here is that the deeper one goes into the paleo-anthropological record, the more difficult it is to not only recover intact evidence - but to assemble what one does find in ONE piece! (In the case of Ardi, she was assembled from 125 separate pieces of skeleton.)

Let's use common sense here. The ancient hominids that pre-existed us didn't have the benefit of embalming methods (say like used on the Pharaohs in Egypt) and certainly weren't able to preserve themselves against the ravages of fearsome natural forces, including shifting tectonic plates, earthquakes, etc. Thus, the bodies and skeletons of most ancestors decayed or were otherwise ravaged, and left few traces. To expect more then, say complete fossil finds over time, and at any time, would border on the imbecilic.

It would be as idiotic in this case to shout "You have no evidence!" as it would be for a crime scene inspector to assert the same (to an undertaker) for an exhumed body whose key features had completely decayed when the person had requested a "green burial" beforehand. (A green burial means no extenuating preservatives are used, and the body basically rots into the ground where it is as bacteria gain access).

Despite these obstacles, we have tens of thousands of hominid fossils in museums around the world that stand as an evidentiary testament supporting our current knowledge of human evolution (see, e.g. the photo snapshot shown). Moreover, the pattern that emerges from this vast array of hard evidence is consistent across thousands of independent investigations - which means all the key steps are confirmed. This means two things of overriding import:

(1) No new "missing link" is needed to validate the amassed evidence, and no subsequently claimed "missing link" will invalidate it. The evidence is what it is, fitting into an algorithmic skein, and in that mode it is consistent ...plus

(2) All myths or fairy tales based on any instantaneous "creation" of humans are resoundingly invalidated because the amassed, consistent, independently verified fossil finds support no such outlook or belief. If people (like fundies) wish to believe that humans are special creations, they can of course do so, but no empirical evidence supports that belief. Thus, they are no more secure in their assumed "scientific" support than say, flat Earth believers. Their best bet, rather than appealing to fraudulent claims, is simply admit they are making religious claims.

Now, those ancient "biblical" or other fables that originated with semi-literate sheep herders and nomads thousands of years ago are, of course, useful artistic or fictional metaphors available to people who have trouble grasping technical concepts like DNA, speciation, allele fitness & survival value, or gene frequency. But in that light, those crude cartoonish perspectives belong rightly in the context of religious studies, not any claimed "scientific research". (And indeed, "creation science" is itself an oxymoron, like "military intelligence")

The bottom line here? "Missing links" advance no case against the evidence we have for hominid speciation leading to man. "Missing links" represents a term fraught with basic misconception (often misused to identify intermediary fossils) and largely adopted by the media to try to relate difficult evolutionary concepts to a scientifically illiterate public. This term, while partially useful in a limited context, is too overused in the real panorama of algorithmic development - as shown.
In the end, the denial of evolution, however motivated (and the fear of evolution by fundamentalists -who tie their purpose to meaning and special creation -can be well appreciated) is a denial of evidence and a retreat to the backwaters of ignorance.

As someone said once before, people are entitled to their own opinions (and even beliefs) but not their own evidence!
Posted by Copernicus at 8:31 AM