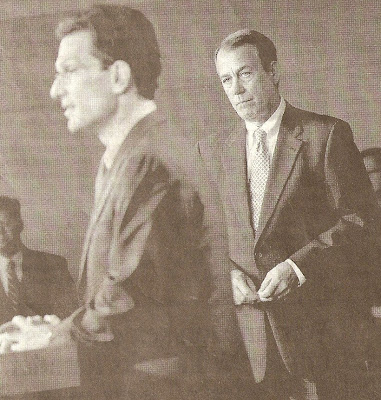 The Head Culprits: Eric Cantor (left) and John Boehner. We hope they and their fellow reeps are able to sleep at night knowing how many kids will go to bed hungry for the next few months or more.


This country is really and truly pitiful. Pitiful, in that a bunch of pukes beholden to big business and wealthy fatcats, would rather give the latter astounding tax cuts to buy more gold, diamonds, yachts and baubles - than give a break to the 2 million unemployed who need an extension by Nov. 30. Otherwise they won't have a red cent to live on.

Oh, there will be the teepee idiots who vent off their snark, by replying:

Despite the fact there are NO jobs, period. We have roughly 14 million chasing full time work, and only 2.8 million jobs for them. Why the hell do you teepee bozos think that every time a new round of job interviews are announced, ten times more people show up than can be accommodated? Uh,....it's because of the ratio between those seeking work and the actual available jobs being nearly 5 to 1. Ever heard of trying to make a silk purse out of sow's ear? Or, trying to fill a one gallon bucket with five gallons of water?

But let's leave that horrific stat and process this: Nearly all of those unemployed are in families and have kids. An estimated 3 million kids, already suffering food insecurity (meaning not enough food to last them the day and provide all nutritional requirements) are being held hostage too. If their folks lose an unemployment extension, we can expect them to then have to compete with many millions of others for precious food stamps. But what do the pukes want to do here? Well cut the food stamp amount from $4.50 a day down to $3. Now, try to figure that one out for say a family of four, or even three.

Projecting ahead, the Repukes are adamant they will not budge unless other cuts in spending come from the federal budget. Hello, asswipes! Ever check out the extension of the Bush tax cuts for the rich you are pushing? There are you damned spending cuts right there! Nearly $70 billion just next year. (If a one year extension for the rich is sacrificed for the needy kids.)

Why do these turds insist on giving all this largesse to the wealthy, increasing an already vast inequality in wealth, while letting kids essentially go into malnutrition? (Amazing in itself, because these jerks also insist they are the party of "values" and against abortions, yet they are prepared to let the living kids starve!) Well, because those are the same sleaze bags that donate the largest amounts to their campaign coffers!

Unemployment benefits one way or other will run out for two million desperate fellow citizens by Nov. 30th. Democrats, rightfully, sought to extend coverage in this holiday season to avoid the singular travesty of two million experiencing their Christmas with only cat food, and the kids' stockings filled with coal...compliments of the Republicans.

But those Republicans (and eleven psycho dems who really ought to leave the D-party) opposed using emergency funds for the $12.5 billion cost of the jobless aid. Get that now: $12.5 billion, or less than one fifth what extending the Bush tax cuts for the rich will cost, for a year. Talk about misplaced priorities! Instead, they want the aid paid for by cutting other programs, like food stamps or Medicaid.

One repuke, a Charles Boustany (La), actually had the temerity to argue that Dems, by bringing the bill to the floor without providing a way to pay for its costs, failed to heed the anti-spending message of the November election. However, as I pointed out in an earlier blog, that message was garbled. Also it was the message of a minority of activist voters, and would have been nullified had the 29 million missing voters (who showed up in 2008)appeared here. My point is that a minority of a minority does not constitute a "national message" and ought not be interpreted as such.

A more salient point for Boustany and his crass, fellow Scrooges to process, is that never before in a major economic downturn such as this, have emergency funds been disallowed to help the long term unemployed. We were always at least, civil and compassionate enough to assist our fellow Americans. But no longer it seems, and this is why atheists laugh on recognizing most of those responsible for this are "god fearin' Christians". Yeah right! If Christ did return now and behold how these "chosen" were carrying on, he'd need at least five barf bags to relieve himself! Obviously, they ignore his words: "Whatsoever thou doest for these, the least of my brethren, that thou doest unto me".

Thanks to these disgusting Reeps, millions will sit in cold homes this Christmas, at the mercy of already stretched charities and ravished food banks, while little Johnnie or Susie (with maybe a lone licorice stick between them) ask Mom or Dad:

"Mama, why did those men in Washington do this to us? DO they hate us that much, to make us starve?"


Hopefully, they will see the image shown here on this blog, to see just who they can blame for their predicament. And bear that in mind, especially Mom and Dad, when 2012 rolls around.


Footnote: If the repukes keep up their obstinacy, by March 1, five million will be deprived of extended benefits and will be seeing an Easter with maybe one egg to share per family.
Posted by Copernicus at 10:01 AM