Why Quantitative Easing (2) is a Bad Move 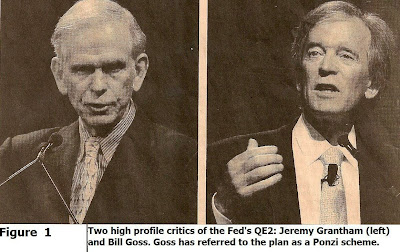 The "writing on the wall": Performance of (L-R), 10 year treasurys, equities (on equities index), the dollar (weighted index) and commodities (on CRB spot index) since the last Fed quantitative easing.
Unknown to most voting Americans today, and which will plausibly have a much bigger effect on their future financial health than anything else, the Federal Reserve's plan called "quantitative easing 2" - to be implemented tomorrow. Having already artificially lowered Treasury yields via "quantitative easing (1)", the Fed is now determined to go for its next trick for burning yields, in round two.

No less than Bill Goss - managing director at PIMCO- has let his views be known in no uncertain terms, comparing the vast Fed buy-ups of treasurys as akin to forging a giant Ponzi scheme and "not a bond holder's friend". (The Financial Times, Nov. 1, 'Asset Purchases like 'Ponzi Scheme')

According to Financial Times columnist Michael Mackenzie ('Fed Prepares to Play Higher Stakes in the Casino of Crisis', Nov. 1, p. 15):

"The presence of such a big buyer means the game of hot potato in the bond market will only become further entrenched, as traders and savvy investors focus on holding specific bonds with the epxectation of selling them at better prices to the central bank.

As the Fed's presence assumes a larger scale in the bond market, so the more distorted Treasury prices will become, rippling through the rest of the U.S. fixed income market which is priced over government bond yields"

Consider now at least one possible major consequence of the Fed folly: Millions of 401k holders who lost their behinds in the 2008 market crash have since parked their remaining savings in fixed income money market funds. Understandably, having lost 30-40% of their retirement savings they've no wish to lose any more. However, the pressure of the massively lowered treasury yields (which also comprise signficant money market holdings) will be to lower the value, and thus risk "breaking the buck" for all those firms holding 401ks.

By 'breaking the buck' we mean the money market fund dollar value falls below parity. In normal cases, the objective of the money market fund is to preserve principal by sustaining the 1:1 ratio so an investor with say $40,000 in such a fund will see $40,000 at the end of a given quarter. But, if the buck is broken (as occurred at one fund in 2008 during the height of the financial meltdown) then what? Let's say the parity is lost and each $1.00 held falls to $0.98. This means that two cents will be lost on each dollar held. That means if a 401k holder has $40,000 then he could lose nearly 2% of that in a quarter or $800.

But this isn't even the worst that can happen. If Treasury yields (which most U.S. debt holders like China now hold) drive down too steeply, the bond holders may simply decide to say 'Enough!' and call all their markers in. In the case of China, it would be nearly $900 billion in t-bonds. The effect would be catastophic to say the least, including choice of a different "reserve currency" than the dollar, yet we hear not one politician talking about it on the hustings.

If such a thing transpired, you'd instantly see congress wake up for once, and be forced to pass an immediate emergency bill to cut defense spending (as the UK has, with its austerity program) to the bone. Without the assurance of one more cent being borrowed (and certainly no promise of higher taxes to pay for them)e.g. to sustain the U.S. empire overseas, half the volunteer army would have to be shelved overnight, probably more than 400 bases closed (including more than half overseas) and even veterans' benefits threatened.

If the Tea party brigade is mad now at Obama, they'd be livid at the Chinese, but what do they expect? For the Chinese bond holders to keep their money in U.S. debt when those bonds (held in good faith) are moving toward being next to worthless? Come on, folks! Wake up and smell the coffee....errr...tea!

Why is the Fed playing this game? According to Mackenzie (ibid.):

"The rationale behind QE2 is to lower Treasury yields and force investors into riskier assets."

In other words, the Fed is hoping secretly to drive the same 401k and other investors back into risky equities which will have a "wealth effect". Translation: a greater expected return in the stock market "will help consumers weather the downturn in housing and sluggish wage growth"

So while Marie Antoinette is reported to have said about her subjects: "Let them eat cake!", the Fed is saying: "Let them go eat equities!"

The problem with this BS is that the same people now facing foreclosure and no wage increases (or loss of jobs) have already lost their asses....errrr....assets,...in the stock market and with equities, and have no desire to repeat that debacle! Why should they, especially as equities' values have remained essentially flat the past ten years. CDs and t-bonds had done better, at least until the Fed began its quantitative easing to bring the interest rates to rock bottom.

This is an act of folly, make no mistake. It is a blatant effort to create a casino (and stock Ponzi scheme) on the backs of one that already took up to 40% or more of Americans' retirement savings. More worrying, as Mackenzie points out, is that the bond market is already "gaming the Fed" and the Fed in turn will "try and game the market". However, as history shows, gaming seldom redounds to the benefit of either side. But in this case, as Bill Clinton learned in 1993, the bond markets always prevail. (In the end, they will likely demand interest rates to skyrocket and there won't be a thing Americans can do.)

Are Americans paying any attention? Any?

Nope! They're all fired up about "teaching Obama and the Democrats a lesson".

Maybe the lesson that is next to fall will be on them, given they lack the focus, insight and information to attend to what really matters, as opposed to political posturing, manipulation, and distraction via the blame game.
Posted by Copernicus at 10:56 AM