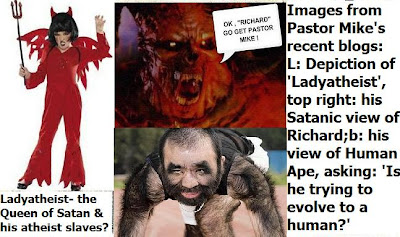 Seems poor Pastor Mikey, aka my recently converted and "saved" fundagelical brother, has more than he can handle now with a swatch of atheists entering his site and answering his questions - as he challenged them to do. Caleb Shay was first, but he addressed the questions on this site - knowing Mikey would read them (as indeed he did, because he gave specious 'rebuttals' to all of Caleb's answers!)

Then there was 'Human Ape' -an erudite poster on evolution - who tried to assist Mikey in finding educational resources to ramp up his minimal knowledge of human evolution (and we know he needs it, because he can't even pass a basic test on evolution). Mikey evidently couldn't take Human Ape's second set of replies so banned him from his site, as per the previous blog.

Then came 'Ladyatheist' who did her best to educate Pastor Perplex, but she also was given short shrift, and - as per his shtick - depicted in a less than complimentary way as a 'she-devil'. Seems whenever one does engage Mikey in an honest effort to address his questions, he can't help doing a predictable brain......errr....knee jerk whereby he draws caricatures to depict those he demonizes. He dare not dignify them as fellow humans, lest he lose what little mind or brain he has left! (The notion of a real, flesh and blood fellow human diverging from his beliefs, is enough to rock his fragile mental world.)

Finally, we have the latest atheist poster, Richard, who Mikey depicts as an emissary dispatched by Satan (see image from his blog) to do what else? Harass poor widdo Mikey..... Boo Hoo hoo, all those nasty Satanic emissaries, knocking at his net door! Whatsa poor little fundie to do? Well, hell, make up all kinds of stupid excuses to demean their honest answers, or else pooh pooh them!

Well, first we had his dismissal of Caleb Shay as really really me incognito! He argued (like a blind fool or idiot) that no one could or would possibly post his answer's to Mike's questions on THIS blog since he (Mike) wouldn't see them! But, within a day, he posted a series of "rebuttals" to Caleb's responses on his own fundie blog, showing for all the world that he HAD seen them! I had to even ask if Mike's IQ was really that low, that he couldn't process that one didn't have to post anything on his blog to be assured that he'd see the content. They merely had to post them HERE!

Then Human Ape tried his best, but Mikey banned him in perpetuity for "cursing", "blasphemy" and other related nonsense. This despite the fact he hasn't presented any evidence to show Human Ape merited that treatment. (We think it more because Human Ape's 2nd set of answers were too overpowering mentally for Mikey to deal with)

Ladyatheist arrived next, but she was dismissed as a "She Devil". As he puts it:

"Brothers and Sisters ; it seems there is no end to whom Satan will send in to try and dispute the Word of God and replace it with the ( ignorant ) word of "man." This time he sent in one of his "She Devils" with answers to my questions , who also goes by the name "LadyAtheist."

Note that at no time, despite his open invitation for atheists to enter his blog and address his questions (which he formerly complained they avoided) has he treated the atheists with a scintilla of respect. In each case, they are depicted either as agents of Satan or demonic embodiments. He can't help but giving their responses to his questions along with a Satanic caricature of the people. But really folks, this is what we expect from a Fundie who perceives the world and unverse exclusively as a battle between "good and evil" with no gray.

Finally, we have Richard showing up to try his hand and being treated the same. Merely because Richard, like Ladyatheist, strives to enlighten Mike by answering his questions - he's depicted as being sent by the Devil to Pastor Mike's site. But again, Mike's short term memory is failing, because it was HE that extended the open invitation to atheists to answer his questions in the first place! (In another brain fart, Mikey looks askance at Richard's responses and attempts "to show how the atheists ALL seem to be contradictory insofar as conceding that there IS a "possibility" that God ( a Divine Creator ) exists". But NO one ever said all atheists think alike or that their brains move in lockstep, like Pastor Mikey's fundagelicals. As I often noted in blogs, there are as many twists on atheism as there atheists - but there are TWO primary types: strong atheists and implicit or weak atheists. Up to now it seems he can't process those nuances.

One is therefore surely led to ask Mike if his questions are merely a posturing ruse, which he hopes to use against us, and in truth he expected no one to seriously try to answer them?

Exhausting his demonization methods and cant, he can only resort to one more egregious tactic (common to many net types frustrated they can't use a person's background against him) he carps about the anonymous profile. But, folks, there is NO law stating that anyone must provide a Google profile! One can........or not! It's the poster's own business, not anyone else's and certainly not a blustering wannabe pastor's! Even if one did provide a profile, there's no assurance it would be legit! It might be just cooked up for the benefit of satiating nosey, stupid people - to shut them up about complaining about "cowards" for whom no profile's given.

Thus Mikey's rant about it:

"But..how do we KNOW this "Richard" exists? After all , when I clicked on his blog profile it reads : "The Blogger Profile you requested cannot be displayed. Many Blogger users have not yet elected to publicly share their Profile." Yeah , okay . Usually I don't even bother acknowledging these I-Net cowards who opt NOT to display their profiles . They are the types who , like the cowardly little worms they are , spout off and want their "15-minutes of fame," yet , wish to remain anonymous . These are people who usually enjoy making obscene phone calls and threats to people over the phone...anonymously , of course . "

Is pure horse pockey and nonsense. For sure it isn't a case of "cowardice" as he intimates, but rather merely protecting personal information in a universe replete with nosey people who have nothing better to do than seek out details of others' lives. And to what end? We know not! But we have ample cases already (from Facebook and Craig's List) of stalkers who were shown the open door, or 'key' to a person's life, because the victim shared too much personal info. We also know software is available for $39.95 on the net, which - given a person's name - allows all kinds of ancillary info to be excavated including: Social Security number, address, bank accounts, credit scores etc. Thus, use of a blank profile in today's hyper-nosey world is an intelligent self-protective step. Again, the charge of "cowardice" based on existence of a profile is idiotic, because one can easily give a fake one. While this satisfies the profile hounding obsessives like Pastor Mike, it doesn't mean anything is real. From this angle, the anonymous profile holder is actually more honest than the profile faker. Honest enough to acknowledge, that YES - s/he values his or her privacy, doesn't want to compromise it, and also won't be bullied by any clown into dropping their cover. And we know, above all else, Pastor Mikey is a Bully, else he'd not refer to people who seek to protect themselves as "cowardly little worms". In his eyes, sure, because he's enraged he's denied an angle for attack.


Notice also his other bully tactic (and he's done this often before, as when conflating atheists with sexual predators and arguing they need to "report their identities and addresses to the police") of comparing those who wish to protect privacy with "obscene phone callers". But this is the domain of the fascist and bully! It reminds me of the case not so many years ago in one U.S. community when all males were ordered to provide their DNA to solve a rape case, and anyone who refused (out of righteous privacy considerations) would be placed under suspicion of committing a sex crime! The ACLU had to step into that morass and warn the authorities that no one should be placed in that position, and to do so meant a massive erosion of personal liberty.

In this case, the person who simply leaves his or her profile blank is regarded in the same context as an anonymous obscene caller, despite the fact the anonymous basis is totally distinct so it's a non sequitur. Because one chooses not to identify himself when posting a blog comment, doesn't mean he will make an obscene phone call (or leave an obscene comment).

But this is typical of Mikey!

Fellow atheists, be aware when you post anything to him you are dealing with a card-carrying BULLY. This is his persona and his character, he can't help it. I explained already in the previous blog how he came to be a bully. He will bully you through your answers to his questions via his ignorant "rebuttals", and he will post images depicting you in some unseemly or demonized way.

Because of his crass, bullying nature, he's incapable of extending the hand of mutual respect to anyone who is different in belief from him.

I applaud, however, all those who've gone to his blog to try to get him to see the light. The only problem is that he's trapped in a permanent darkness that won't even allow him to see the other HUMAN attempting to get him into that light!
Posted by Copernicus at 9:17 AM

Thanks for taking a look! I will be sure to check out your blog in the next day or two!