Banned for 'Foul Language'? How About too high an IQ! 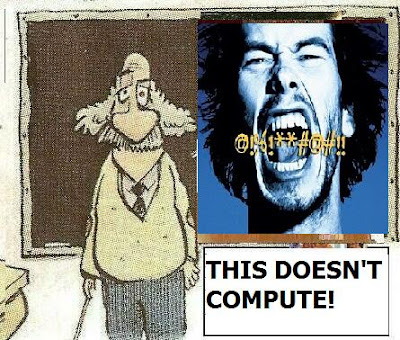 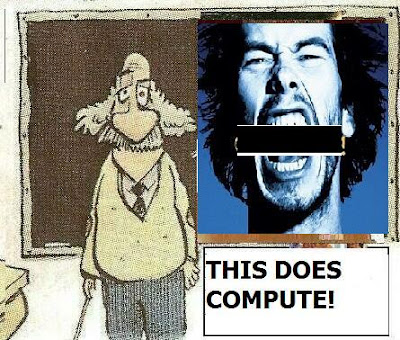 It appears the atheist-evolutionist poster 'Human Ape' has been given the bum's rush by Pastor Mikey. It appears the allegation made is that in his next set of answers (to Mikey's daft, loaded questions) he veered into intemperate language and is henceforth banned from Mikey's sacrosanct site. Well, let's let the would-be pastor tell it in his own words:

"I tried to give him ( as I do ALL atheists ) the benefit of the doubt , and taking into consideration the extreme hold Satan has on them , by posting his answers to my questions , along with my rebuttals . However , shortly after he sent me his original answers ( that I posted yesterday : http://pastorstahl.blogspot.com/2010/11/human-ape-answers-some-of-questions.html ) ; he fired off a volley of other "comments / answers" that were filled with vulgar profanities and blasphemies . Frankly , I could care less about him cussing me out , and directing his hateful and ignorant obscenities at myself . BUT...as I've mentioned numerous times in the past , when he ( or ANYONE ) blasphemes my LORD and Savior , JESUS CHRIST , that's where I draw the line ! You can hate me , curse me , beat me , crucify me , whatever..I could care less . When that happens , I'm simply reminded of the words of Jesus ; "Love your enemies, bless them that curse you, do good to them that hate you, and pray for them which despitefully use you, and persecute you" ( Matt. 5:44 ) . "

Well, we don't buy it! Not one bit. First, Human Ape's set of original responses to the Pastor's questions were models of rationality, objectivity and cool. Why on Earth would he suddenly go ballistic to the extent Mikey claims? We've no idea! Further, what EVIDENCE have we, apart from Mikey's claims, that such an outburst even transpired?

The least Bro Pastor Wannabe could have done is post a segment of Ape's responses, and if any "profanity" appears, easily substituted key letters, like f*#@, or s%!t or whatever. We would then get the idea of the extent of transgression, and no literal "curse" words would besmirch Mikey's glorious little site (Can't have that! Better to preserve it to show those he judges hellbound to be shown burning in that abode, crafted in his deranged mind)

Second, Mikey's history precedes him. Readers may recall here both Caleb Shay's and Janidebar's complaints from a year or so ago when- once again- Bro Pastor invited comments to his charges against atheists, and they took him on. All of a sudden, as jani put it, he stopped posting their replies - allowing only his. On further inquiry it seems Caleb had shown that an infinite Being isn't capable of lifting an infinite mass, because infinite energy would be required to do so, so no energy would be left, and the Being would cease to be infinite. The Pastor couldn't tolerate such a brilliant riposte so simply didn't post it!

Let's understand one thing about this brother of mine: From the time he was knee high to a table he's been a bully. Whenever he starts receiving the short end of the stick, he resorts to cheating or using methods to get the better of the other guy. In his guise as manager of a pseudo-Christian blog (most real Christians now ignore his site, after one particularly illuminating altercation with one of them 2 years ago) he achieves this end by goading those he despises with loaded questions, then when they seek to honestly answer them, he comes back with bullying replies. I already gave an example in my last blog on this:

Thus, he hates to lose, physically or intellectually, and will do any and everything in his power to try to prevent it. What I suspect is that his Boot Camp "training" at Parris Island in the early 70s probably presaged this. Most people may not know this, but when I encountered him in Miami in 1973 (him back from the Corps, me coming back there for a 4 week holiday, between original Peace Corps service and an extension) he informed me he was writing a journal which he hoped to convert to a tell-all book, about his Boot camp experiences. He even had a little Smith-Corona typewriter to whack out pages, and I read about 22 of them by the end of August.

The little I recall reading was appalling: absolute over the top humiliations, including making them lick toilet rims, and using toothbrushes to clean latrine floors - and that was the tame stuff. Mike vowed at the time that when his book came out "it would blow the top off the corps" - but then, as with many people and their proposed books, he never got around to finishing it.

But I theorize his own bully mode really was reinforced from then, and he wouldn't be taking any more shit from anyone. When he finally found Jaysus and "salvation" the ordinary bully then transmogrified into the worst kind, a holier-than-thou self-righteous bully. A bullier of atheists, Catholics, Buddhists, Mormons, JWs, Science of Mind'ers, Eckists...you name it. Bully by way of his antics on his blog - either blocking further comments after attacking posters, or alleging they committed this or that infraction. His ultimate game, to depict each and every one in a Hell setting, e.g.http://brane-space.blogspot.com/2010/10/more-total-pathological-insanity-can-we.html

Anyway, we invite 'Human Ape' to tell his own story on this blog. We welcome his actual comments that were denied on Mikey's blog, and we will post them here. Fair is fair and this bully Mikey can't be allowed the final word.
Posted by Copernicus at 5:19 AM