The Poison Pill Of the Repuke Tax Cut Frenzy 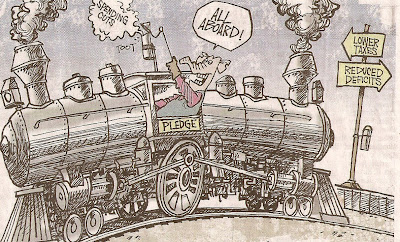 It’s now abundantly clear to any one of common sense that cutting the deficit, and cutting taxes are two mutually exclusive propositions: if you cut taxes you will only ADD to the deficit, and if you want to cut the deficit you must increase taxes- since not even the most draconian spending cuts will get this country anywhere near the ‘red’ again,

Much of the illogical and pathological basis of the GOP tax cut mania has been lacerated to pieces in Matt Miller’s excellent book, The Tyranny of Dead Ideas. Amongst the top ones he deals with are tax cuts. Miller launches right into his jeremiad on page 99:

“Traditionally, the (Republican) party had been fiscally conservative and made a virtue of balanced budgets. But the new Republican stars like Jack Kemp and Ronald Reagan saw the tax cut message as a tremendous political opportunity – never mind Reagan had passed the biggest tax increases in state history while serving as governor of California.”

In other words, the “tax cut” meme was incepted as a purely cynical political device to try to gain advantage with voters, most of whom couldn’t pass a basic personal finance test – far less an economics exam.

Subsequently, the assorted gnomes of the dismal science – like Milton Friedman – put in their 2 cents and gave the tax cut baloney some veneer of justification. “Starve the Beast!” they screamed, and spending cuts must follow. If you use up all the federal money in tax cuts, and even more in military-defense spending, you’ll expand the deficits to the point any domestic spending is impossible and the existing services must be cut.

Of course, this wasn’t new. In the early 60s, just before the JFK assassination, the extreme Right embodied by the John Birch Society, the States’ Rights parties and others put forth their agenda to deprive government of the means to do any good or perform any worthwhile services. They included:

- Elimination of both Social Security and Medicare – regarded as “socialist intrusions” into a capitalist nation (“All services to the public should be abolished in favor of personal enterprise”- H.L. Hunt, in ‘Farewell America’, 1968, by James Hepburn, Frontiers Press, p. 248)

Oil Billionaire Hunt (who’s been linked by a number of researchers to the JFK assassination) actually argued that the Post Office was a first step for Communism in the U.S. and that Social Security ought to be eliminated in favor of personal initiative for oldsters. If they couldn’t make it…..well….tough luck on that! In the early fifties he used his noxious ‘Fact Forum’ radio show as a platform for many of these views.

Fortunately, most Americans relegated nuts like Hunt, the Birchers and their brethren to the margins. No one of respectable society would be caught dead with any of them, and certainly wouldn’t repeat their nonsense in polite company.

But by the early 80s, this nuttiness gained mainstream traction, assisted by those like the former actor Reagan and economist Friedman. As Miller notes (bid)

“The Republicans were particularly successful in the 1980s and early 1990s in demonizing the tiny fraction of the budget that went to welfare (barely 1.1 % vs. 55% for defense) . They also deftly separated the idea of taxes in the American mind form the popular things (health care, pensions, schools) that taxes paid for.”

This led to such idiocy, as Miller notes (and this was long before the teepee morons arrived on the scene) of certain oldsters in the early 90s bellowing at meetings:

“Don’t let the government get its hand on MY Medicare!””

Hello, fool! Medicare IS the government’s.

So, this is where the cognitive dissonance began in the American mind and why, to this day, the majority of Americans are trapped by their own fiscal stupidity and confusion. They want their pet programs preserved, but they don’t want to pay for them using increased taxes. The latest Wall Street Journal poll confirms it with 57% of Americans asserting they disagree with the Deficit commission on its proposed cuts to Social Security and Medicare. And oh, by the way, they’re against raising any taxes to pay for the programs they love.

Ordinarily, this would give a perfect snapshot of a schizoid people, maybe on the verge of a nervous breakdown. Because what they want is 180 degrees from what reality – fiscal reality – dictates.

This is why I've pounded the theme of the Dems just allowing ALL Bush tax cuts to expire. None of them are any use, and merely keeping a set for the middle class is still political pandering. As Miller aptly observes (p. 100):

“Democrats, meanwhile, knowing how powerful the issue was for families who felt squeezed,were afraid not to be for tax cuts too. So they offered ‘targeted tax cuts’”

So, from the early 90s the pathetic and clueless Dems boxed themselves in, as opposed to crafting a powerful rebuttal and telling people straight: “Look here, you can have tax cuts if you want, but down the line it may increase deficits and we will have to trim your benefits like Social Security. Do you really want that? Especially when that is the money you’ll most need in old age?”

Americans need a wake up call from a true grown-up, not a hostage to political pandering. They need to get it that they can't have their cake and eat it too.

In terms of the basis for raising taxes, Miller like other others before him (James Medoff and Andrew Harless, The Indebted Society, 1995, p. 84, 'Let Them Eat Cake', noting that "high tax rates are associated with higher productivity growth" There is a consistent and strong relationship.)

For his part, Miller notes (pp. 101-102) that the U.S. tax rates remain the lowest % of GDP of all the advanced nations. Indeed, his schematic graph (Fig. 1, p. 102) the U.S. rates are in the domain proximate to Slovenia, Mexico and Turkey. In other words, about what one would expect for a non-advanced nation! His point is crucial: America's living standards- as measured by output per person - have increased sevenfold- but taxes have not kept pace. Why is this important? Because if the tax support for the living standards (via health care, roads-infrastructure, etc.) don't keep pace with population growth, the country is going to decay. Living standards don't preserve themselves, nor are they contingent on the good graces or intent of the wealthy class. If the communal basis for upkeep isn't provided, a society will decline (see my previous blogs on the Great American Decline). This is what we've seen in the U.S. of A. as roads, bridges and sewer lines decay and collapse, while monumental income inequality keeps growing as does the number of those in poverty (now closer to 44 million, because the poverty threshold stat is fudged and lowballed just like the unemployment stat. Basically, it hasn't been re-indexed in over 35 years!).

Miller's most counterintuitive conclusion from the compiled statistics is sure to make the Repuke orgasmic tax cutters even crazier (p. 105):

"Despite passionate arguments to the contrary, history and current experience show that social spending and the taxes that fund it have not materially weakened economic incentives and growth. How can this be?

For starters, the higher spending made possible by higher taxes often contributes to economic growth. Good schools, government-sponsored basic research, and high quality system of health care, make a nation's citizens more productive. In addition, it turns out that higher spending 'welfare states' have tax structures that are more pro-growth than those of the lower-spending, low tax countries"


We do hope Nancy Pelosi and the Dem House will keep these facts in mind as they consider whether to extend the Bush tax cuts or let them expire. Based on Miller's collective evidence the choice is clear as a bell- no matter how the Repukes spin it:

Let ALL Bush tax cuts expire, saving $3.7 trillion over the next ten years. THEN: approve the extension of the unemployment benefits for those whose 99 weeks will end on Nov. 30th, and approve the elimination of imposing Medicare cuts while you nixay the proposal to cut food stamps in the Supplemental Nutrition program, from $4.50 a day to $3. Familes are already facing massive food insecurity and they don't need to be saddled with even more - what with 1 of 5 of our kids already going to bed hungry each night.

Let the fat, overstuffed rich turds sink on their own, don't give the fuckers another red cent!
Posted by Copernicus at 10:02 AM