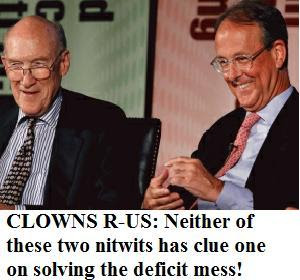 As the Deficit Commission co-chairs (or clowns), Ernest Bowles and Alan Simpson announced their plans for deficit reduction this week, they certainly earned kudos for outraging everyone with their cockeyed BS. Bigmouth lout Alan Simpson bragged after presenting his and Bowles' recommendations: "Well, we've harpooned just about every whale in the sea ....and also lots of minnows!"

And along the way, millions of hapless seniors, who - if these recommendations are legislated into law- will now have to face a bleak future of raiding endless dumpsters, acquring a taste for Kibbles and cat food, and mastering the ways of begging on the street, or from their offspring(if they have any) to give them a place to stay.

But before I unload totally, let me concede they did get a FEW things correct. That includes:

- Lopping $100 billion off the defense budget (ought to be more like $250 billion, given the U.S. spends more on defense than the next 45 nations combined!)

- Closing hundreds of military bases overseas (actually, almost a thousand ought to be shuttered- as they're not needed and merely military over stretch).

- Tax increases, but only minimally - based on some capital gains.


But make no mistake: ultimately, the provenance of this "Commission" is just a shuck and jive sham, designed to baffle with bullshit and fool the gullible. Nobel Prize -winning economist Paul Krugman exposed their true mandate in one of his recent columns:


and it has little to do with deficit reduction. As he notes:

"Matters become clearer once you reach the section on tax reform. The goals of reform, as Mr. Bowles and Mr. Simpson see them, are presented in the form of seven bullet points. “Lower Rates” is the first point; “Reduce the Deficit” is the seventh.

So how, exactly, did a deficit-cutting commission become a commission whose first priority is cutting tax rates, with deficit reduction literally at the bottom of the list?"

Well, because (as we will see in a future blog on the permanent decline of the U.S.) this is what the mighty bond traders who rule this planet demand: less security for the middle clases worldwide, and more insecurity - especially as they have come to depend on social insurance. In this way, the cancerous global corporatocracy can metastasize as people consume more and more time just to survive. Plutocrats prosper (as does phony religion) when people are deep in survival mode, trying not to be victims of "survival of the fittest".

Now, if this asinine commission or either of its chief Bozos were REALLY about deficits, they would:

1) Put reducing deficits FIRST on their list of priorities, instead of 7th, and

2) Start with the simplest method in their recommendations: allowing all the Bush tax cuts to expire -for both the middle class and the wealthiest.

The effect of (2) will be to shave $3.7 trillion off the deficit in ten years, and meanwhile Bowles and Simpson's recommendation shaves $3.8 trillion off in that time. So why don't they recommend it? Because they aren't truly invested in lowering the deficits, but in slicing government to the bare bones. Their plans for Social Security cutting, as well as Medicare, expose their cynical game.

What have they got planned for Social Security? I list their intended proposals,...errrr...hits as follows:

- We increase the retirement age to 69, from current 65

- Ensure seniors can no longer collect early SS at 62, but make it 64 instead with full retirement not until 67.

All of which is a recipe to hurl seniors, already stretched with paying for Medicare Part D plans (which subsidies they also want to cut) into the dumpster.

Currently, with no COLAs seniors are also confronting exploding new drug plan costs, as they renew their Part D choices. In my own wife's case, her medications had been moved to "tier 3" by Wellcare, and their cost increased by 100% each quarter, even as her monthly premiums went up by $17.60. Ordinarily, her COLA would have covered that increased premium....almost. Even the $250 substitute increase (knocked down by repukes in the August stimulus that extended jobless benefits) would have taken care of it - and part of the medication increase...but no deal.

Increasing the retirement age to 69 is essentially saying, to paraphrase Paul Krugman:

Janitors and waste collectors should be forced to work longer because these days corporate lawyers and bond traders live to a ripe old age and need people to hang around longer to clean their floors and toilets, then empty their voluminous waste

Do either of the two co-chair clowns have any idea how difficult and physically debilitating manual labor is, even for someone near 65? I saw my own dad, after incurring monumental medical bills, having to work as a janitor for some months in Port Charlotte, Fla. in the early 80s and it took years off his life. If he'd had to work another year, as opposed to collecting his full Social Security of ~ $1850 a month, I doubt he'd have lived two more years.

The situation is even worse for African -American males, two -thirds of whom currently die before reaching the current full Social Security age of 65. If that were extended to 69, nearly 87% of African -American males would be 6' under before collecting a red cent. Thus, the Simpson-Bowles' recommendations are not only age-ist, careerist-biased, but racist as well. One can't mince words here, faced with the actuarial data. Just like the fact that most rich people obtain their wealth via inheritance and not work, this is buried from sight of most people, and only the most earnest dredging of dreary Census materials brings it to light.

As for demanding seniors-unemployed elder workers early collection of S.S. at age 62, that puts another kinfe into their hearts. As Barbara Ehrenreich pointed out in an article she wrote, concerning one long -term unemployed guy of 60 - he couldn't wait any longer and was unable to sustain himself on the streets for another month - so robbed a bank to ensure his security. As he purportedly put it: "I needed three hots and a cot, and this deed enabled me to get them!"

So, have Simpson and Bowles any remote idea of how many future senior criminals they will have created if this blighted proposal sees the light of day? I doubt it! Right now, early S.S. has been an escape hatch for many of those age 62, who've been unemployed for years. It enables them to take a dignified out when nothing else is available - even janitorial work at a school as my dad hd to do. (Especially when Repukes predictably cut off extending unemployment benefits - in favor of their stupid, budget-busting tax cuts).

As for means-testing for wealthier seniors, although I can see the economic basis for this, I also know it would mark the death knell for the Social Security program - and believe both co-chair clowns know it too. Once you means-test, you put Social Security in the category of welfare, which is also means-tested. You also break the communal support for the program, with wealthier seniors no longer having the same investment of political capital to sustain it.

Now, let's ditch the BS crap and look at the actual facts on Social Security, and why it's inclusion into the deficit "cuts" is absurd. Social Security currently has a $2.5 trillion surplus. Anyone, any generic nitwit- say Peter G. Peterson, a Repuke, or some Tea Party freak telling you otherwise is lying through their rotten teeth. Anyone telling you the S.S. surplus "isn't invested in real bonds" is also lying through their teeth. Anyone telling you it "can go bankrupt" is also a goddamned liar. It can't because it has no creditors!

In other words, these cynical vipers have succeeded in creating a fake crisis about Social Security by preying on Americans' almost total ignorance of the program. This includes the true claim that it will not being able to pay full benefits by 2037 (it'll still pay three-fourths). Which they then pervert by asserting the solution is to shred all benefits now, so the extended impact will be only one-half of benefits by 2037 for those who get them! Huh!

How does that compute?

Here now is where the bear sits with his buckwheat: What does Obama do with this "Demon baby" of a commission conceived on his watch? Take ownership for it, and see liberals bail in droves and leave him a one-termer in 2012? Or- do what any right-minded person does (as in Rosemary's Baby) and slay the "demonic baby" right there and then? Sure the bond traders and the Peter G. Peterson Foundation imps will squeal like stuck pigs, but at least you will preserve some semblance of a legacy, as opposed to ignominy.

The choice is yours, Mr. President! Let's hope you see the need to convert that demonic baby into a full abortion...and soon!
Posted by Copernicus at 10:11 AM