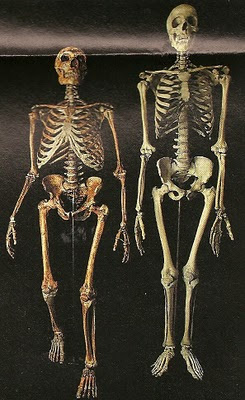 
Scoping out howlers on evolution (colossal, ridiculous errors of fact or knowledge) can become a full time job, if one wants one. Trouble is, in an intellectually backward nation like the United States of Teepee Bozos, it won't get you many coins, or profits - because most are content to bury their heads in the sand to escape reality.

With that note, we look at some more howlers picked at random from fundie blogs. This is an amazing thing in itself, given that most of these characters (who purport to expound on the "errors" of Darwin and evolutionists) couldn't pass a basic test on evolution to save their pathetic imaginary souls. Up to now none of them, not one, has deigned to take my basic test on evolution and send the results to me. (They may have well taken it, even by cheating or using google- but kept the results to themselves!) That test can still be found at:

Again, the test is designed to be finished in one hour, and the person who fancies himself competent to spout off on any aspect of evolution (including "missing links", timing errors, or other) is expected to score at least seven out of ten.

Anyway, on to the howlers:

(1) The second law of thermodynamics proves that complex live organisms cannot rearrange themselves into an organism of a higher form as claimed by evolutionists...

This well circulated canard (you can find it on almost any fundie blog or site) commits at least two fundamental errors:

a) The error which assumes that evolution means more primitive organisms develop into more complex or organized ones, and


Consider (a) first: At no point and no place do evolutionists claim that more organized forms are the inevitable manifestation of natural selection and adaptation, and represent evolutionary success.

What evolution states,which any high school biology student learns, is that the species which survive best are the most well adapted to their environment. Thus, the humble cockroach beats just about all other species on Earth for evolutionary success given it's been around for 150 million years. Humans, much more organized than cockroaches, have only been around in their modern form for barely 1.5 million years, if that.

Humans, up to now, have barely 1/100 th the evolutionary success of the cockroach!

The last part is very crucial but it is exactly the part that the creationist-ID crowd omits, which renders their question a non-starter. The reason is that neither the Earth nor its biological systems are "closed" systems, hence do not exhibit constantly increasing disorder. The Earth, for example, is open to the radiant energy of the Sun and receives some 1360 joules per square meter per second. Plants on the Earth are likewise OPEN to solar energy, and receive it and then use it in the process of photo-synthesis.

Other organisms eat the plants and thereby incorporate that energy into themselves. Thus, the path is cleared for higher organizational development and speciation. We do not see a constant “wind-down” because all these systems are OPEN (or at least partially so), not closed.

Another error, often made in the same vein or same breath, has the fundies confusing chaos and entropy. In fact, they are not alike at all. Entropy, as noted above, refers to increasing states of disorder. For example in a ferro-magnetic system like a bar magnet, one heats it up causing 10^9 miniature atomic magnets - originally all aligned in the same directions- to assume totally random directions. This, of course, means the magnetic property is lost, and the reason is because an initially ordered system became a disorderly one.

Chaos, meanwhile, is a non-linear effect on dynamic systems over time which renders them less and less amenable to prediction (e.g. predicting the new positions of components). It enters because computational equations or formulae (say from celestial mechanics) leaves residual strings of real number extra digits that carry forward and upset the initial values, leading to highly perturbed final ones.

By way of example, computing Jupiter’s position in 2050 is feasible and not diluted by chaos, however extrapolating its position one million years hence would be a largely futile exercise. Chaos, intruding via real number extra digits (arising from lack of total precision in initial coordinates), would play havoc with the result. In other words, Jupiter would be nowhere near the position actually computed for it.

This howler seems to have arisen from a raft of different misconceptions and misinterpretations that originated on different evangelical blogs, then went viral. Most recently, one Jack Cuozzo (a creationist orthodontist) had done some research into wisdom teeth, and concluded that those (expendable) teeth somehow point the way to establishing the validity of creationism- or at least that humanity had it much better in the past (which he identified with Neandertals, despite the fact they were exterminated by Cro Magnon Man, our modern ancestor).

Cuozzo claimed to have performed a thorough study of the skulls of Neandertals and concluded that they were from a time when human beings had much longer life spans, developed and grew much slower, and were of superior strength, and possibly intelligence, if their larger brain capacities are an indication of this.

1- the claim that lifepans were much longer (actually, the oldest Neanderthals lived to only 45-50, which - while admittedly older in human history terms- can't compare to the 72-78 or so of modern Americans or Europeans)

2- Superior intelligence? Nyet! (while their brain volumes were larger on average they lacked the increased convolutions of the neocortex surface peculiar to modern humans and Cro-Magnon Man. This, of course, may be one reason they lost out in the competitive race with modern humans - becoming extinct by 28,000 years ago)


In his rambling pseudo-science, Cuozzo inferred that problems often caused by wisdom teeth were further evidence of "genetic" decline and degeneration in modern humans. Cuozzo insisted the problems common with wisdom teeth in modern times were a consequence of an increased consumption of growth hormones in foods, and due to the heavy emphasis on cooked foods that require less chewing.

Again, this is crackpot "academics". For example, while blustering about "evidence provided through genetic decline" - Cuozzo gives us nothing! Where? WHAT evidence of genetic decline? Was the telomeric fusion of the original chromosomes 2p and 2q (in Modern Man's primitive hominid ancestors) affected? What about the cytochrome -c sequence? Did chromosome 17 differ (in Modern humans) by more than a pericentric inversion? In what specific genes did the overall"decline" transpire? How long did it take?

To even remotely believe that wisdom teeth contributed to entire species "degeneration" is straight from the outer reaches of la-la land. (But then anyone, i.e. creationist, who believes that a talking snake tempted Adam & Eve to initiate humanity's woes is already in la-la land!) Re: the claim that "species degeneration was attendant on wisdom teeth" - the evidence doesn't support it. And what we have here is a "hypothesis" (or more likely speculation) that must be tested to be accepted. In fact, even with their spectacular wisdom tooth health (to see Cuozzo's claims) the Neanderthals suffered from a wide range of ailments, including but not limited to: pneumonia, Rickets, parasite infections, malnutrition, and a disturbing tendency to bone fractures (see: Rethinking Neanderthals, Smithsonian, June, 2003, p. 83)

As for the problems related to wisdom teeth in modern times, this is no mystery. In many cases, these (expendable) teeth emerge far back in the rear of the buccal cavity and pose problems for many humans because the existing jaw size can't accommodate them. Even when they do seem to fit, they often erupt in positions such that there is a major bite offset, e.g. the bottom (or top) of wisdom teeth does not fully contact a mutual chewing surface in the opposing jaw. Further, the rear of wisdom teeth are difficult to clean and because of this there are recurring inflammations of the gums as bacteria thrive in hidden pockets, or recesses.

But Cuozzo skirts over the issue of the poor design of the human jaw (too small to accommodate the teeth he so admires) which would redound poorly on his "Designer God" - in favor of red herrings about hormones and good, chewable raw foods. In my own personal case, I experienced problems for many years (despite consuming large amounts of raw vegetables). I suffered from recurring gum infections in the vicinity of my wisdom teeth, until I had them removed four years ago. In addition, the teeth - since they had no opposing bite surfaces- were erupting to the extent they had to be 'sawed" down each year, lest they grow into the opposing gums! Since the extraction, I haven't had a single gum infection.

But the epitome of his foolishness Cuozzo saves for last when he concludes:

"This shows that overcrowding in the mouth, and subsequent problems with wisdom teeth, is connected with the degeneracy of modern man. "

And that is total nonsense. In fact, the overcrowding in the mouth is plainly due to POOR DESIGN in terms of the teeth of modern humans being too many to be accomodated in the existing buccal cavity! In other words, the botched work of a flawed "designer"!

Neandertals didn't exhibit these problems because the contour of their face and jaw was different. (Refer to comparative skeletal photo). Given Neandertals probably evolved from Homo Erectus, this is understandable. Of course, if one has the sense and intelligence (not to mention education) to accept evolution it all fits (no pun intended!) Thus, the transition from the earlier hominid ancestor (to Cro Magnon) was so rapid that the jaw didn't develop concomitantly. Indeed, the evidence we have shows the jaw size was sacrificed to support a much larger cranial volume - while for the Neandertal, larger tooth number (including wisdom teeth) - was supported by having a protruding and wider jaw, something Cro Magnon lacked- refer to diagram).

What I'm saying is that given evolution is an algorithmic process, trying numerous blind leads and in trial and error fashion, it makes much more sense that evolution engendered the "small mouth" capacity problem of the Cro Magnon, not that humans were in a more superior stage at the time of the Neandertals (especially since these "more superior" humans (actually sub-humans) were very likely exterminated by their later arrivals- who exceeded them in reproductive capacity, and hence out-competed them for resources. In other words, Modern Humans were the more adaptable species!

That, by the way, is another common creationist fallacy: that "superior" Neandertals were the progenitors of modern humans, but this is false. Why do so many evangelicals revere it? Because in their confused craniums, if they can believe they've shown a more superior, advanced race preceded a "degenerate, less advanced" species, they've "disproven evolution.

But they're barking up the wrong tree. The Cro-Magnon and Neandertals actually represent two distinct lines of humans. The Cro Magnon in the end were the superior line and outbred and out-hunted their rivals into extinction. So much for the "Noble Savage" myth of the Neandertal.

The bottom line here is that modern humans beat out the Neandertal line of humans by adapting better to the paleolithic climate and environment. They were probably much better hunters, but as the author of The Neandertal Enigma shows, they likely overwhelmed their competitors by simply being able to breed more. Thus, modern humans conquered the Neanderthals by sheer numbers, and more than likely at their lunch too - if not ate them for lunch!

Next: The "Missing Link" Malarkey

Posted by Copernicus at 1:32 PM