The Dem Lame Duck Session: Do They Have the Stones? 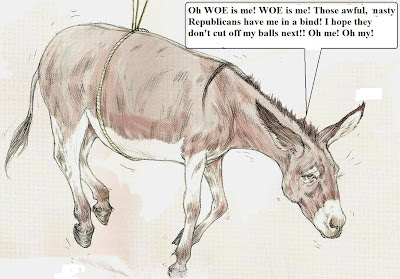 Of course, in the aftermath of last week's election, all the punditocracy is going nuts, purporting and proposing to tell the Dems what they can and can't do. "Did you not hear the message from the voters?", these paid hacks ask. "Do you not hear that the message is to pull back?" Yep, spoken like true corporate lackeys.

Even the esteemed Economist magazine seems to have bought into this tripe, in a piece entitled "That Tin Ear" (Nov. 6, p. 41) where the author blabs:

"Mr. Obama's manner in this week's day-after Whitehouse press conference was one of sombre defiance, in which he graciously appeared to forgive voters for their natural impatience at the pace of economic recovery.

He claimed to be ready for compromise with the Republican leadership in the House of Representatives offering to mix and match ideas'...but the strenuous efforts of the White House press corps to get Mr. Obama to say that his policy decisions of the past two years on health care, the stimulus package or anything else might have been mistaken came to naught".

Okay, let's run this reel back a tad. Just WHO are the "Whitehouse Press corps" to be getting President Obama to admit any of his policies were "mistaken"? These are generally plain, dumb ass media whores, who (most of the time) couldn't even get the story of the 2008 financial meltdown straight. Half of them or more didn't even process the role of credit default swaps, and how their insinuation into high class (triple A- rated) bonds nearly brought down the banking system.

Virtually none of these semi-literate, overpaid bozos made any connection between the credit default swaps (CDS) and the crash of the stock market in 2008, or how the CDS being buried into collateralized debt obligations (and purchased by pension funds worldwide) ruined millions of people and no small number of communities, including in Ireland, Iceland and Germany. Further, not one WH press corps media hack that I read (including the so-called "Dean" - David Broder) noted the connection between the credit seizure and the incapacitated demand side of the economy. That is, the side which absolutely required a massive infusion of stimulus to avert a 2nd major Depression- which 94% of academic economists agree would have befallen us if either: a) John McCain had been elected, or b) Obama had sat on his butt and done nothing and "let 'em all suck salt" (which would have been the same as (a))

Had these nitwits done their job, in other words, the general unwashed out there might have:

a) Better understood that the demand economy was on life support and needed resuscitation via stimulus from the government since no other agent was infusing money - not companies, or any of the private sector (including banks lending to each other) and certainly not consumers going on shopping sprees after losing half of their 401ks.

b) Better understood that both the bank bailouts AND the stimulus were needed (the former to re-build bank assets after they were inundated by CDS) but that the two infusions were different in principle, helping different demand side sectors.

c) Have understood that - as reported by the impartial Congressional Budget Office- the Obama health care reform (derisively called "Obamacare" by too many nitwits) actually would bring down the deficit by $1.3 trillion by 2020.

But these "press corps" morons never did their job of properly informing the public so none of the above were learned, and bear in mind we are talking of a population at large that's basically deficient in personal finance - far less macro-economic dynamics. (By the way, this is also not to let Obama off the hook, who clearly could have done much more explaining the whys and wherefore's!)

Now, we find because of this press corps and other ignorant pundits (especially at FAUX News), the message of the election has been garbled into the belief that the voters "chose the Republicans over the Democrats". No, they emphatically did not! This is exactly the WRONG message! As Financial Times columnist Edward Luce pointed out yesterday (p. 2) the truer fact is that voters "suffered economic anguish" and reacted to that by voting the opposite of what they had (otherwise known as 'grass is greener on the other side' syndrome). A kind of Pavlovian (salivation) reflex but in the voting booth. If the Repubs had been in power, they'd have suffered similar losses, probably more (House AND Senate).

That brings us to the Democrats and their lame duck session. The question here is: How much will these Dems, in the House and the Senate, act like whipped wimps, or continue to do the people's business without fear or intimidation - by either morons like Eric Kantor, or the ignorant press corps?

Will they crawl on their hands and knees like beaten dogs, maintaining the submissive posture while the Repukes do...whatever... or, will they rise to the occasion and give the repukes what for? And remind them thus: 'Oh, by the way, repups - so long as we're in the majority and our House lease is not yet expired- we fully intend to ACT the part!'

Here is how the Dems in congress can become champions, show that they at least have a pair of stones (and a spine!) between them, and thereby make their base much more likely to support them in two years - as opposed to becoming even more dispirited and disconnected:


1) Tell the Repukes to take a flying dump at the wind and pass the extension of unemployment benefits for the still unemployed by November 30. Don't let the stupid Rs try to block this, and remind these eggheads that - according to CBO stats, the return on such a stimulus is nearly $1.50 on the dollar, compared to barely 0.25 for tax cuts, and 0.10 for the top tier tax cuts (which btw, were never paid for at the time they were implemented in 2001, which is why a sunset clause had to be appended. This is colossal spending on a scale we simply can't afford!)

2) Do NOT compromise with the pukes over the Bush tax cuts! NO! NO! NO! If the pukes demand the rich get theirs, else no "middle class cuts", then let ALL EXPIRE! Letting all expire will save $3.7 trillion over ten years. That is, $3.7 trillion less will be added to the deficit. Middle class people still gain, because the case can now be made (after Obama's 'Deficit Commission' makes it findings known) that major cuts to Social Security need not be enacted given a clear sacrifice has already been made by the middle class ($3 trillion over ten years, for the middle class cuts)

In other words, the Dems are actually preserving FDR's sacrosanct program of social insurance by allowing ALL the Bush tax cuts to expire, no exceptions. Giving in, even to allow a two year extension for the cuts to the rich - then all middle class going forward - will add nearly $3.2 trillion to the deficit and make a stronger case for the Deficit hawks to demand much more draconian cuts to "entitlements" later.

This is the opportunity for the Dems to locate their brains and mouths, coordinate the two for once, and explain to financially clueless Americans why it's impossible to have their cake and eat it. If they want tax cuts, they cannot also have their benefits preserved. If they want the latter, they can't have tax cuts. DOH!!!

3) Be sure to legislate and pass the "doc fix" before the lame duck session expires by Xmas recess. This "fix", needed about every year, ensures no drastic 30% cuts will be made to Medicare physicians - a move that would see more seniors dropped by physicians, and fewer doctors accepting patients 65 or over. As it is, tens of thousands of Medicare subscribers have no primary care doctors because they live in regions where either no one will accept them, or there are too few to begin with.

The Dems in congress need to stand firm on all these fronts, and not let themselves be driven to cop out or wimp out by the Republicans- who, of course, have no hint of compromise in them. They've made that clear. (As for the "blue dogs" - Nancy Pelosi needs to bring these little DINO mutts to "heel" - and inform them that they are no longer ruling the roost, after 2/3 of their lot got punked for being repukes lite in the election!)

So why the hell should the Democrats accede to their demands?

Grow some cojones, Dems - and show us you deserve our continued support as a true opposition party to the Repukes - and you aren't another bunch of corporate-owned whores masquerading as the people's reps.
Posted by Copernicus at 8:15 AM