Time to Apply the “Rod of Correction” to a Certain Fundie’s Behind? 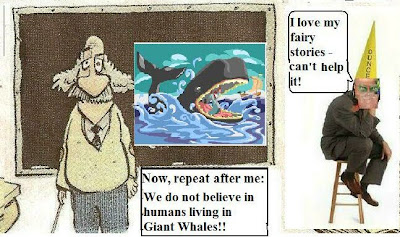 A certain arrogant, ill-informed and moronic fundie blogger is even more exercised since yesterday’s takedown of his “Noah’s Ark” bullshit, and now insists- despite the inimitable laws of hydrostatics (as embodied in Archimedes’ Principle)- that an "Ark" full of tens of thousands of animal pairs would never have sunk. (Evidently, he never noticed the calculations that showed sinking even gave him a break – as they didn’t include the weight of the ship itself – another 100,000 metric tons!)

Aroused by all this into some delirium of "bloggal" retribution, and not content to rehash that particular myth, he revisits yet another piece of Bible BS, that ....whoa…..Jonah was truly swallowed by a whale (or other "specially prepared Great fish") and ....it's really and truly TRUE! And further, any skeptic or atheist who disavows it (‘specially since Jesus “also believed it” – which is false and merely another inserted translation) ought to get the “rod of correction”! LOL!

In fact any rods around designed for the corrective sphere of influence, need to be applied to this guy’s fat butt.

But here’s the choice part, obviously realizing his three pseudo –explanations won’t fly for a real skeptic, he trots out the story of James Bartley who was claimed to have been swallowed by….GET THIS!...a real whale …and survived two days. Therefore.....ta da....it's not a stretch a "specially prepared" (by the "Lord") Great fish could find a blessed guy staying longer. (Maybe even ordering up some Merlot while his skin is being sloughed off by stomach acid)

“Finally the whale was caught. After 30 hours in cutting it up etc, the stomach was about to be pushed back into sea when an unusual movement was noticed inside of it. On opening it up, lo and behold they found the missing seaman, James Bartley. He was delirious. It took him three weeks to recover and his skin was dyed a permanent tan."I remember very well," said Bartley, "the moment when the whale threw me into the air. Then I was swallowed and found myself enclosed in a firm, slippery channel whose contractions forced me continually downward. Then I found myself in a very large sac. By feeling about I realised I had actually been swallowed by a whale and was in his stomach. I could still breathe, though with much difficultly. I had a feeling of insupportable heat, and it seemed I was being boiled alive." Bartley then lost consciousness until he was found."

Well, that is one tall fish story, I will say that! At least we can be thankful that he isn"t claiming HE was devoured by a Great White off Ft. Lauderdale and then walked out alive three days later to prepare a blog!

Okay, let me rephrase that, there are a few vague aspects of the Bartley yarn that are true – but we have to separate them from the bull pockey. It is true that a whale expedition came to perdition, with several small boats capsizing, off the Falkland Islands in the South Atlantic in the late 19th century. One of those purported to have capsized was never immediately found (like others who had drowned) was allegedly Bartley.

Subsequently, the whale under pursuit was identified and killed (after two days) and its belly cut open, when lo…it was alleged that one James Bartley was found doubled up. Here, many divergent accounts emerge and no one was sure which could be believed. In one, the man’s skin was bleached white from the whale’s gastric juices and he lived like an albino the rest of his days.

Most of the codswallop aspects didn’t really begin to unravel until Edward B. Davis, a Christian professor at Messiah College (in Grantham, PA) attempted to corroborate it in his general efforts to prove the bible true. (Most of his research was summarized in an article appearing in 'The American Scientific Affiliation', published in 1991.)

Incredibly, the only fact this HONEST Christian could corroborate was that the vessel’s name was “The Star of the East”- but nothing else. This after not only scouring newspaper files, original documents and libraries, but actually tracking down the original sources in England and interviewing them.

Most disturbing, when Davis carefully read through the documents about the particular voyage during which the alleged whale incident happened, he found “James Bartley” was never listed as a crew member. Most damaging to the story was a letter written by Mrs John Killam , the wife of the captain of the 'Star of the East,'. It was published in 1907 in 'The Expository Times' by a reader who had corresponded with Mrs Killam about the whale story. She wrote:


"There is not one word of truth to the whale story. I was with my husband all the years he was in the Star of the East. There was never a man lost overboard while my husband was with her. The sailor has told a great sea yarn."


We atheists have to thank at least this one honest Christian prof for giving us the truthful lowdown, even as we prescribe a big “Rod of correction” for a certain blogging pseudo-pastor who can’t help telling lies to support his delusions. (Or, at least being dishonest in not telling his blog readers the account had not one iota of truth and ought not be used to try to provide ballast for a biblical myth.)

There never was any real Jonah swallowed by any real whale, not now or ever. It was an ancient fable dating from Babylonian times that certain Christian scribes thought would be cute to work into their texts. Hell, they even invented and inserted fictitious words to put in Yeshua’s mouth to aver he “believed” in it. Horse pockey! Yeshua KNEW it was part of a creation analogue and would have never...ever....ever expressed belief that it was anything other than an ancient parable! But this is the tripe we can expect from clueless biblical literalists, led more by their dogmatic beliefs than insight, analysis and reason.

Lastly, NO “great fish” – sperm whale, Great White shark or other was ever “prepared”, because no supernatural entity exists to do so! Not in the past, not in the late 19th century and not now. If someone claims otherwise, we demand he give us the necessary and sufficient conditions for it to exist!

But we won't hold our collective breaths waiting for it! Anyone who circulates a howler like the Bartley crappola wouldn't know the difference between a sufficient condition (in the logical sense) and a bs-ing brain condition.
Posted by Copernicus at 9:03 AM