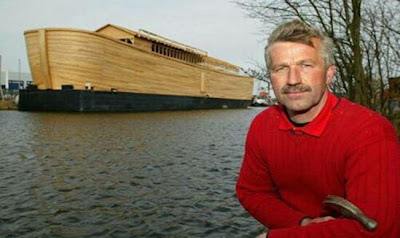 Shown: Johan Huibers and the Ark he built to biblical specifications. The ark is 150 cubits long, 30 cubits high and 20 cubits wide- or two-thirds the length of a football field and as high as a three-story house 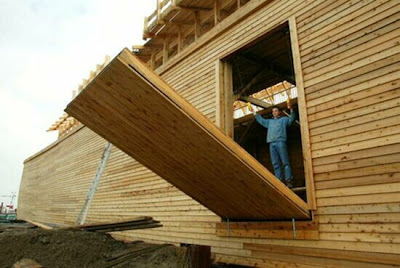 . While Huiber, a self-proclaimed "creationist" built it as a testament to his faith - analysis of the weight factor arising from all 18 billion odd pairs of species at the time, discloses it would have sunk before making it barely a half mile from port. This is part of the reason many fundie ministers no longer take their faith seriously.

The segment on ABC News yesterday evening was both searing and mind-blowing: Evangelical ministers in the "Bible Belt" actually questioning their faith to the extent of losing it and becoming atheists - while they continued to act as ministers in their churches! I had to DVR the segment, then replay it several times to make sure I got it right. If true, this was an astounding discovery - showing that atheism had actually made inroads into the hardest of the hardcore believers, to the point of weakening their faith and engendering an unbelief mindset.

According to one Southern Baptist pastor ("Adam") interviewed, and part of the pastoral service of a small evangelical church:


Another evangelical, "Jack", admitted that :

"Reading the Bible is what led me not to believe in God,"

Evidently, even his (initially) brainwashed mind was finally overcome by the too-tall tales, ranging from Noah's Ark (where more than 18 billion pairs of land-based species (mainly insects and arthropods)would've had to have been collected - according to the fable- leading the aggregate weight to sink the largest boat) and the whale tale of Jonah (where intelligent people are actually expected to believe that a guy could live for three days submerged in a vat of hydrochloric acid and emerge alive.)

Others noted the many conflicts they beheld, in various passages and also the clear contradictions which could not be reconciled. These were the same as the many contradictions I've posted before on this blog. The ministers realized they couldn't go on believing this crap, thus became de facto atheists, though they kept their ministerial positions. As one put it, there was no other field of work for which he could earn a living - so couldn't just up and quit the ministry. Nor was he able to tell his wife of his change in beliefs.

Well, join the club of millions of atheists who remain in the closet because an intolerant nation (that allegedly prizes freedom of speech) won't let them out. Or, check that: persecutes them (including firing from jobs) if they do come out!

Adam said his initial doubts (about God) came as he read the work of the "New Atheists" - mainly Daniel Dennet, Sam Harris, Richard Dawkins and Christopher Hitchens. All popular authors who in the past four years have punctured dozens of shibboleths and nonsense about God belief, as well as the primary canards of the creationists.

Amazingly, Preacher Adam undertook his research into the atheist books in order to help him "defend his faith". But anyone of unbelief might have told him that a truly serious quest might not end the way he expected it to. When one comes honestly face to face with bare-faced baloney and crap, and is resolute in applying logic- it is most often the mental investment in crap that falls apart. In this case, since most faith is based on such crap, unbelief proved the winner. According to Adam:


"My thinking was that God is big enough to handle any questions that I can come up with,"


However, he said that didn't happen. Well, as former Evangelical Bart Ehrman could have told him, a serious questioning pursuit seldom leaves one in the same place- unless one pursues the questioning with blinders on. (Of course, this is what most diehard fundies do, since they lack the courage to truly pursue the questions, given that requires an intellectual honesty not usually found in chronic, addicted bible bangers)

Also, like Bart Ehrman, "Adam" came to the usual crisis, fretting he now might "lose my immortal soul if I believed the wrong thing". This, obviously, is the result of Hell myths being interjected into his brain- as Bart Ehrman also noted (in his recent book, 'God's Problem'). But, also like Ehrman, his rational brain eventually gained control over the previously planted irrational fears of devils and "eternal fire" - and he came to "live out my life as if there is no God."

Well, good for him.

As atheists, we can be happy such "evangelicals" exist- even if they opt to remain in their churches and preach the usual bullshit to the masses. We can't expect them to give up their earning power-jobs and be rendered paupers, merely out of a purist unbelief principle. NO atheist I know demands that much.

We are simply glad that we have unseen atheists "in the fold", so to speak. We also look forward to many more evangelicals finally seeing the light and realizing - after proper study of their own "good Book" (whichever version they choose) that it's all made up bunkum. Swill unfit for any truly educated mind, or one that professes to be such.


A synopsis of last night's story can be found at:


http://abcnews.go.com/WN/atheist-ministers-leading-faithful/story?id=12004359
Posted by Copernicus at 9:42 AM