'Buy Nothing Day' a Dud compared to Shopping Frenzy 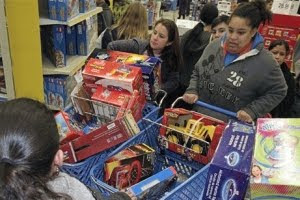 The scenes of manic shoppers rushing into a Target in Buffalo, leaving a man pinned against the door screaming for help and no one paying sattention were difficult to behold. Has it come to this? That material goods, HDTVs, DVD players, and LCD tvs mean more than fellow humans to “Muricans? It appears so!

Buy Nothing Day, also on Black Friday, was always intended to be a counterpoint too the screaming consumerist frenzy of the people piling into stores scurrying like a million rats and prepared to take on more debt with less savings. Right now, the saving rate is barely 4% compared to 8% in Japan and 10% in Germany. Before the 2008 credit meltdown the US of A saved less than any nation, and actually reached the negative savings rate of -0.1%. This is disgusting.

With the recession ordinary Americans had pulled out of their debt-leverage miasma and were on the road to finally building savings back up and restoring their credit worthiness. The stock market crash had shattered their savings, and the housing credit crisis rendered millions of homes “under water” – with mortgages costing more than the homes are worth.

Into this milieu there arose ‘Buy Nothing Day’ but it’s generally been a bust, with barely 3% of potential shoppers adhering to its ideals. It appears the baubles and bangles of the erstwhile consumer culture are far more powerful than anyone ever dreamed.With tantalizing ads from Target, Best Buy, Penney’s, SEARS and so on filling the papers, how is a normal person to refuse the come on? Well, by doing what I do and just tossing out all the detritus.

Ordinarily, in macro-economic theory, all this buying ought to be generating millions more jobs. But is it? Look at the stats! Corporations are now sitting on nearly $1.5 trillion in cold hard cash reserves and aren’t doing diddly with it. So we have the worst of both worlds: Big corporations are thriving, sitting on mammoth cash amounts while real income for Americans is stagnant or decreasing because new jobs aren’t being supplied or existing ones are being farmed overseas.

Now, will there be an end to it all? Will Americans come back to their senses after watching that new 32” LCD tv and seeing their debts mount?

I’m not sanguine because we appear to be more a nation of spenders than savers. But, if it were ever reversed, as many observers note (e.g. the authors of The Winner Take All Society, and ‘The Trap’) then we’d have more high quality jobs to support us, as opposed to just commercial detritus.

Let’’s hope Americans finally wake up and maybe next year, the numbers participating in Buy Nothing Day reach at least 20%
Posted by Copernicus at 8:25 AM