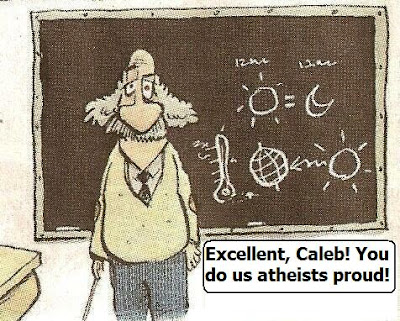 Caleb Shay just e-mailed that he'd beheld a certain innominate fundie pastor's further "questions to atheists" (despite the fact he's asked all of them in some form at least six times before, though he can't seem to recall! Early Alzheimer's?) Anyway, Caleb demanded a "go" at him, and to put him in his place once and for all. I couldn't resist posting his answers (though I still disagree with taking any tests or answering questions until Pastor Perplex answers ours!), since I always enjoy egging the Pastor on, and skewering his absurd delusions. There're a few places I myself would have given more elaboration, details, but I think that overall Caleb's done the infidel side a great service.

So the questions are given in their order, then Caleb's (excellent) responses. Caleb informed me he thought it a waste of time to post on the Pastor's blog, since all that would happen is that the responses would be poked fun of "by an ignoramus".

Q1 ) Is it POSSIBLE there could be a Divine Creator? ( Please note the key word "POSSIBLE" ) .

Sure it's possible, just like it's possible there could be a ten million foot monkey on some other world, or a green dinosaur hidden in the jungles of the Phillippines, or a 15-dimensional flying spaghetti monster. Or an alien civilization that is ten thousand times more advanced than ours. But "possibility" isn't the same as probability.

Given that almost anything is possible if one never sets out neessary and sufficient conditions for it to exist (which as Copernicus has often stated, you are derelict in) it makes no sense to even consider a possibility unless these are first given. Can you? Will you? Do you even know what they mean? (despite copernicus defining them over a dozen times in earlier blogs)?

Q2 ) Do YOU know everything about the universe , and how it came into existence?

No one knows everything about the universe, including Copernicus. What we have are the best rationally based and plausible scientific explanations which don't involve committing the fallacy of ignotum per ignotius. That means using the not at all well known to try to explain the not well understood. Like, we don't fully understand dark energy, but we aren't going to explain it by resorting to "demons"! We know we can actually apply an equation of state to account for its evidence of accelerating the expansion of the universe. As long as that works we use it. Same thing for spontaneous fluctuation of the quantum bubble to start the whole universe. So long as there's any kind of a rational -scientific explanation (even if it doesn't seem so to you) we use it instead of supernatural ones.

Q3 ) Can YOU show proof of ANYONE ( or have YOU personally ) witnessed MACRO-evolution?

I already explained this in an earlier set of questions you gave! Don't recall? Then check your own blog!

I already told you I personally did experiments in multi-generational fruit fly studies. This was during a 6 month biology study at Caltech. (Fruit flies with large mandibles evolved to fruit flies with small ones). You claimed it was "micro-evolution" not macro-evolution, but Copernicus took you down on that, big time.:

(Besides, you have no business asking any evolution questions until YOU show you can pass a basic evolution test!)


3a ) Do YOU know (approximately) how long the MACRO-evolution process takes as opposed to MICRO-evolution?

A meaningless question since you haven't specified the species to apply it to. (So, a fruit fly example would occur in thousands of times less say than for a bird to alter its beak to eat different seeds or insects instead of seeds)

The universe can, as quantum physics already shows and Copernicus has done blogs on, e.g.

But you probably can't understand it 'cause you never even did basic physics. You wouldn't even do C's basic physics test. And just because you don't understand it, or you think it fails some 'commonsense' test, doesn't mean it didn't happen. Again, given a choice between a rational-scientific answer and an outlandish irrational one, we always choose the first to avoid committing ignotum per ignotius.

Faith is a willingness to accept some claim or other with about zero evidence to back it.

Sure! In my close friends (faith they won't stab me in the back) and in my wife and children (that they won't try to do me in for any reason).

Q6 ) Do YOU believe in reincarnation?


Nope, 'cause I've seen nothing to back it up. When ya dead, ya dead.


Q7 ) Do YOU believe "aliens" from another planet EVER visited earth? ( if yes , do you have ANY historical / archeological proof and/or eyewitnesses?)

YES! The Roswell case gives the best illustration and lots of evidence, including sections of the ship which were subjected to high stress tests and the metal behaved like no earthly elements. All the original newspaper runs attested to a flying disc that crash landed, and the pieces - some - recovered by Jesse Marcel.

You can read more about the details here, which includes a photogram of the Roswell Daily Record and its headline- as well as sketches of the aliens. Of course, once the Air Force entered the case, they destroyed the papers and further runs, confiscated as much hard evidence as they could, and then dreamed up the "weather balloon" baloney to explain it.

It began in the dark energy bubble that initiated the universe. See the link in Q4. No, I don't "know" it for a fact, but it's the best scientific explanation so surely beats saying "a God did it"

Once again, we don't say that. See:http://brane-space.blogspot.com/2010/11/m-brane-mailbag-more-letters-from.html

What we say is that any claim made in any ancient book, bible or other, has to be parsed through the language media and historical pespective. You can't just accept any ancient words at face value, or you look like a dummy.

I have no beliefs on him just as I have none on Jesus Christ, or the Buddha. Since I don't believe any of those religions, my opinions of their leaders or god-men are irrelevant.

----
As a postscript, Caleb also requested we put up- again- OUR questions for HIM to answer.

and the basic test on evolution:

We demand he take our tests, questions before we do any more of his!
Posted by Copernicus at 10:38 AM