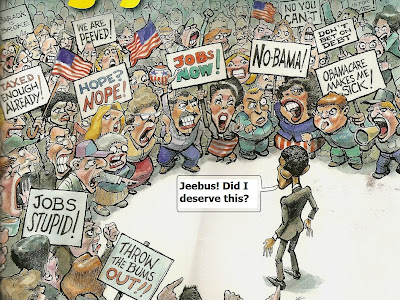 Well, looks like the teepee-driven Reeps got their wish and took over the House. That begs the question: What do they propose to do with their newfound power? If it's just more 'No!' and zero action they'll look at getting themselves routed from power once more, as they did in 2006. Americans, no matter what their stripe, want solutions not 3-ring circuses!

Of course, as the TP-klan will learn quickly, contributing to actual governance is a damned sight harder than yelping 'Don't Tread on me!' in the streets, or screeching at politicians in town hall meetings. If they don't actually deliver answers, and pronto, they'll also find themselves as marginalized as the once formidable "Christian Coalition" was in the late 80s and 90s.

Now, let's look at some bright spots before getting back to the problems of the Repukes and their tea party subset:

1- Harry Reid clinched his Nevada Senate seat from Tea bagger "mama grizzly" (or is it grisly?) Sharon Angle, much to the consternation of all the money-dumping hotshots behind Angle's TP campaign. Now, they'll not only face a D-majority Senate (albeit somewhat diminished in power with an estimated 52-48 majority) but also Reid as top honcho.

2- Obama has his veto pen at the ready, so any hints of overturning his health reform legislation ain't gonna happen on his watch. (Unless a Supreme Court ruling is issued that decrees that having people purchase health insurance violates the "commerce clause" of the Constitution. Most serious legal scholars don't believe so, but who knows?) And to override his veto pen the repups will need to gain a two-thirds majority in the House, and then repeat it in the Senate. It simply ain't gonna happen, and any teepee that believes it will is hitting too much moonshine, crack or something.

3- There will be an inevitable culture clash as dozens of teepee candidates take their seats in the House, and it isn't a foregone conclusion they'll fully cooperate with Boehner and the old-line, "country club" Republicans who mainly view these upstarts with reservations and dismay. (One reason they only grudgingly backed Christine O'Donnell's senate run in Delaware and why they are still reluctant to contribute money for many contests.)

Thus Dems can at least look forward to some internecine battles among the Rs themselves, without having to lift a finger. We know for sure, that the GOP veterans on the Hill will expect the newbies to fall in line with interparty discipline and quickly. If they don't, watch out!

4- The Repugs and their teepee coalition will be hard pressed against the wall from January, and all out-of -work Americans will be watching. Look forward to some of the following to school them fast on the learning curve:

- Another vote will come up to extend unemployment benefits for millions of long -term unemployed whose benefits are set to expire after 99 weeks. Are the Reeps, driven by the TP-deficit obsession, going to really stiff all these millions (of voters!) and deny them? Are they truly going to let them go onto welfare, stand in long breadlines, or apply early for Social Security? (Thereby digging a further hole for that!)

- The Deficit Hawk TPs and Reeps will have to confront the recommendations of the Obama Deficit Commission, due out on December 1st, but not likely to be voted on until January. Will they chicken out and "punt" (despite their hand wringing over debt and hot rhetoric on growing deficits) or will they actually vote to cut "entitlements" if the Commission recommends it? The choice is stark: Do they really want 44 million oldsters on their backs, OR do they want to come off as deficit wimps?
- In case the Reeps and their TP friends haven't noticed, Medicare (Part D) costs are skyrocketing as beneficiaries now head into their renewal phase. My wife (now on Medicare,) with a letter received yesterday, has been notified her Diovan prescription (for high blood pressure)is to increase by 100% as Wellcare (the managing HMO) places it in the highest cost "tier three" category. They now want to charge her $225 a month for 30 tablets! In addition, they're increasing their subscription for Medicare Part D by $17 a month!

This in an environment where there will be no increase in the Social Security COLA (because the inflation is claimed to be "too low"). Thereby ensuring a definite benefits cut - though indirect, back door. Are the TP-Reeps prepared to deny oldsters relief again, by voting down a $250 one time substitute for the lost COLA, or will they toss oldsters under the bus in the name of "deficit monitoring"? Bear in mind, payback is a bitch!

- The deficit obsessed Reeps, in February or March, will face another call for additional money (war supplemental) for the Afghanistan occupation. This will range from $75- 100 billion. Are they going to just cough it up and admit they're deficit hypocrites, or are they going to finally demand higher taxes to pay for the military costs - rather than borrowing more from the Chinese and leaving the debt on their grandkids?

All in all it will be interesting to see how these excellent, know -it-all yelpers deal with and manage actual power. My bet, despite John Boehner's words last night, is they'll try to take Americans' minds off the real issues confronting the nation, and mount a stupid impeachment ploy instead. They will appoint a "special prosecutor" and Darryl Issa will likely call countless Obama administration officials before his high court - all the while fiddling as the nation burns figuratively, with its financial mess and unemployment.

Now that they've ascended to actual power, instead of being part of the noisy Peanut Gallery, here's some more advice for any tea party readers- including brothers who may be checking in (and Mike, you really DO need to get more rest and not be blogging so much! Take care, bro!): Try to read and understand some of the country's actual, freaking history before you go around with your little George Washington hats, or Ben Franklin get up!

Start with The Federalist Papers! See therein, from the writings of Alexander Hamilton, "Publius", John Jay and others, how the Founders were NOT a monolithic body united in agreement on the proper role of government. Consider just James Madison's comparison of the Federal System proposed to the solar system, with the Sun the governing body holding all the planets in bounds, as the central government must do for the States.

And, btw, my friends, there is NO such critter as "states' rights"! As Prof. Garry Wills has noted in his landmark book, A Necessary Evil-A History Of American Distrust Of Government, Simon & Schuster, 1999, the debasement of discussion of rights has been enabled by consistent disparagement and ignorance in respect of the notions of rights - particularly 'State's Rights'- and the dismissal of the unenumerated rights of citizens under the Ninth Amendment. As Wills correctly observes (p. 109):

"Governments have prerogatives, people have rights - so Hamilton speaks of 'abridgments of prerogative' in the state to protect rights of citizens. What the Ninth Amendment says is that the rights enumerated as protected by The Constitution do not exhaust all rights inherent in a people. The states can retain powers, though not rights.

So 'state's rights' is something of a misnomer, no matter how common its use. The states have no natural rights. Their powers are artificial not natural - since they are things made by contract. The equation "states are to the federal government as people are to the states" mixes apples and oranges. Citizens alone have rights, in relation to both the states and the federal government."


In addition, read and learn more about the original Founder (and first President), George Washington. Note from his journal writings (many of which are open for inspection at Washington House, where he stayed in Barbados for his brother's recuperation, with the brothers landing in Bridgetown on Nov. 2, 1751 - Source: The Journal of the Barbados Museum & Historical Society, Vol. XLVII, 'The Significance of George Washington's Journey to Barbados', p. 1)

Even before assuming duties as commander-in-chief of the Continental Army he envisaged a time when the nation would attain its freedom and come under strong central governance. Later, his actual experience as commander during the Revolutionary War made him skeptical of arrogating too much power to the rights of states, and made him cognizant of the need for strong central government. This skepticism was confirmed when the Confederacy attempted secession nearly 90 years later, and had a strong, central Federal government not been present - this country might have fractured.

Washington and other Founders (e.g. Madison) actually believed that an unchecked spirit of liberty was anathema, and more akin to a lethal virus inside the body politic. What if some states saw themselves having such power they could secede whenever they felt like it (as idiot governor of Texas Rick Parry proposed not long ago, and 2nd Amendment morons in Oklahoma also considered in terms of a state militia law to "defend against the Feds")? In terms that would not endear them to today's Tea Party brigade, Washington and Madison clearly saw that such loose liberty could easily destroy the budding American union and liberty itself. "Liberty" itself is often misused, as Teepees tend to forget that any liberty without defined limiting parameters is meaningless. There's a thin line, in other words, between liberty and license.

Lastly, Washington's own words in one of his later journals would make today's teepees take all their Washington hats off forthwith and burn them in one pyre. According to George:

"Experience has taught us, that men will not adopt & carry into execution, measures best calculated for their own good without the intervention of a coercive power."

We see from this, George W. probably would have faced the same fate as Obama had he been around to confront the likes of Teepees in his day.

As for the teepee fascination with "free markets" and corporations, give me a freakin' break. The last truly free market vanished with the last small entrepeneurs and competitive markets in the 1940s- the small corner grocery stores and drug stores, if you will. However, as massive corporations (Walmart etc.) came to the fore and drove all the small fry out, corporate power dominated - and now we have multi-nationals like Monsanto, and BP calling the shots (with many multi-nationals rivaling the power of whole nations). Teepees live in a world of delusion if they think these coercive market players are their pals, or ought to be their models. As for corporations, it was Jefferson who once opined that he hoped before the nation grew much more every last one would be "crushed". He meant it, because he could see even from the early 19th century vantage point how they'd threaten personal liberty if left unchecked.

One hopes, with their new found power, the Tea Partyers take advantage of some further educational opportunities as well! It might actually help them make a serious contribution, as opposed to enhancing the national noise level.
Posted by Copernicus at 8:25 AM