Will the GOP Overreach? You Can Make Book On It! 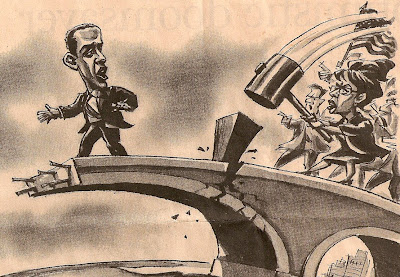 As we head toward the final hours of the mid-term elections, most expect a drubbing for the Dems- with loss of the House assured (by maybe 70 seats) and the near takeover of the Senate (leaving a demoralized 51-49 D-majority). To put the perspective in terms of today's Financial Times Editorial:

"In some ways, the Democrats deserve this setback. The Republicans, on the other hand, do not deserve their impending success....the risks for Republicans is in reading too much into this election."

Indeed. Because the most the Republicans have demonstrated is the "power of NO", which I do hope the Democrats will remember the next time they are in a total minority position! So, what the FT Editor is getting at, is that the Republicans haven't done anything positive to warrant the inevitable success they will see. All that's occurred, really, is they've managed to tap into a sea of irrational anger that's beset a good chunk of the populace, much of it in the form of the "Tea Party" which proposes to take America back to its constitutional roots.

Well, good luck on that!

The fact is that any such trick is impossible. Even now, as I write this, the Federal Reserve is preparing to do something never before done in financial history, what they call "QE2" or "quantitative easing two". That is, using $500 billion to buy up public securities in the form of Treasury bonds in order to drive down their yield (see also my other blog on this!)

Do most of the Tea Party crowd even have a clue what that means, or what quantitative easing is? I doubt it! Do they have any remote idea that no matter how many times they cite x, y or z from their little handbook Constitutions it won't stop the Fed from doing what they are planning? Do they have any conception that they are mere cogs in a giant financial machine, operated by corporate titans (like the Koch brothers) who are getting the Tea Party networks to carry grist to the mill of the corporate overseers? That this election result (of divided government) is precisely what those overseers desire? Useful idiots, anyone?

"If the U.S. casts as many Democrats out of office as seems likely, it will not be voting for a Republican programme (whatever that might be) but for a divided, disempowered government. Whether that is a wise thing to vote for is doubtful...."

Indeed, but it IS a strategic thing for the corporate overseers, especially if they can get their pack of useful idiots (who think THEY invented the tea party concept) to go even further and repeal all those programs that threaten their corporate pocketbooks and wealth - like the health care reform law. Meanwhile, the retention of a "barbaric health care system" which "forces parents to choose which of their children deserves insurance protection" does need to be rejected- in the words of Prof. Raghuram Rajan, chief economist of the IMF and one of the few to have predicted the 2008 financial meltdown.

Prof. Rajan, now at the University of Chicago's Booth School of Business, is also concerned that the midterms have exposed the U.S. fractured politics and that too many are being distracted by the real problems the country faces- as opposed to the faux problems. As Rajan observes (Financial Times, Nov. 2, p. 14):

"The U.S. still thinks its (financial) problems are cyclical and not a structural problem. For sure in a recession there' s a strong cyclical component, but the fact that this is the second or third problem in the last 15 or 20 years suggests something else is going on. The U.S has more time to repair its economic fault lines ....but not infinite time."

Of course, the key structural problem few in the U.S. want to hear, is the over leveraging that took place during the run up to the housing crisis- and which consequences remain. The perfect capsule for this was the way people used their homes as ATMs, to refi then take cashouts, just like a giant piggy bank. In this way they built up woeful amounts of debt which they were left hanging with when the bubble burst in the credit meltdown.

The latter froze up nearly all bank assets, and not even banks would deign to lend to other banks (for fear they had credit default swaps on their books) far less to individuals (for school loans) or businesses. The outcome was predictable: as soon as some financial growth did occur, spurred on by Obama's demand side stimulus, corporations- businesses began hoarding cash. They have by now hoarded nearly $900 billion, as opposed to using it to create jobs.

If Tea baggers want to know in a nutshell why the unemployment is still sky high, there it is. Though economic growth is in evidence (nearly 2% in last quarter) businesses are not using their capital for job investment. That isn't Obama's fault. But it's so much easier just to march down a street with a placard bearing "Socialist!" scrawled on it, then to understand the deeper financial issues and dynamics at work. The problem, of course, is that political fundamentalism - just like Christian or Islamic or Jewish religious fundamentalism - provides no genuine dialogue to be had, no pragmatic give and take or what we call "compromise". Such a word is a no-no in the realm of the true believer, as is the need for policy data on health care costs or scientific data on rising seas and global temperatures. Unless the data conforms to the true believer's zeitgeist, it's off the table.

Giving the rich a tax break also will not help the tea baggers, but only put more capital to hoard in the pockets of the businesses (nearly $700 billion more if the upper centile of Bush tax cuts is extended over ten years).

My point in all of this is that the putative big "winners" tonight will have more of a Pyrrhic victory than not. Sure, it will look temporarily sweet but soon the reality will set in: that when you hold actual power, as in the House, you will be expected to use it to improve the lot of the people who voted you in, not merely for political witch hunts and payback.

This is exactly where the GOP are likely to over reach. So taken with getting back at Obama, that they will immerse themselves in investigations over nonsense and saying more 'NO' - unaware that they wil be digging their own political graves for the next round. Because with structural problems aplenty there isn't the luxury of time to engage in such antics, never mind what their tea partyer base may want.

If the GOP wishes to become a true political counterforce, they will have to show they are up to the job of actual governing and doing it in a sound way - especially with the fearsome financial problems still facing us. Mere posturing for their supporters, or choosing the easy way - e.g. extending all the Bush tax cuts, will not get it done, and only make the U.S. existing structural position more precarious.

This is the GOP's choice, but I am betting they will overplay their hands, and choose wrongly, as they did after interjecting their "Contract on America" in 1994 - which also eventually came a cropper. "Those who forget the past, are doomed to repeat it" - to paraphrase the words of George Santayana.
Posted by Copernicus at 9:47 AM